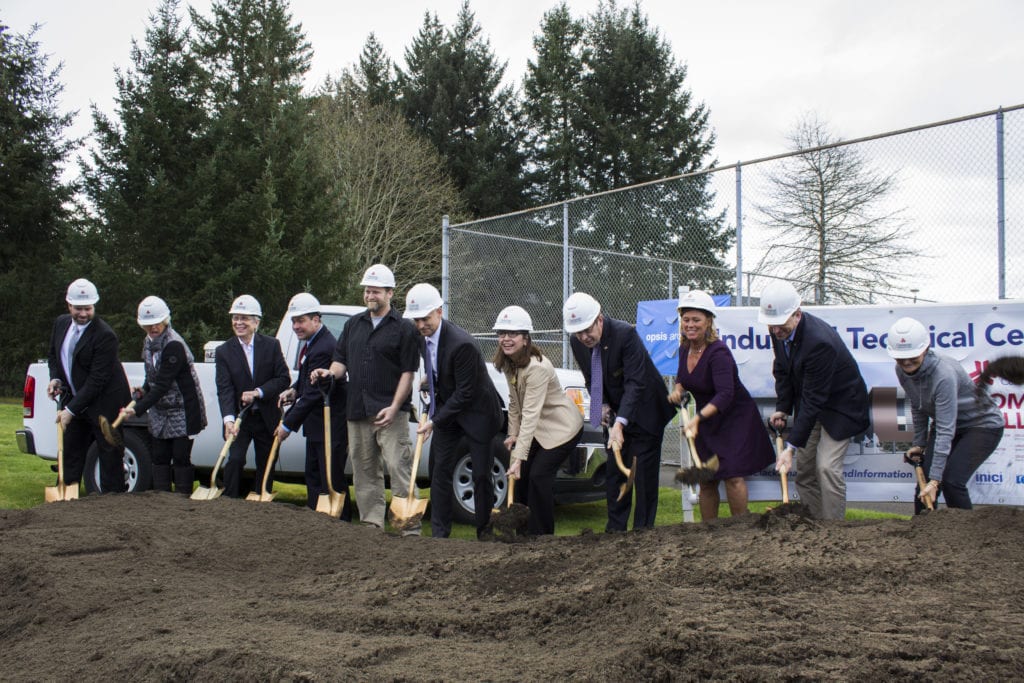 College President Joanne Truesdell, center with light jacket, along with others from the college administration, breaks ground at the future site of the Industrial Technical Center, Thursday, April 6.

Clackamas Community College kicked off an event on Thursday, April 6, for the Industrial Technical Center, which will be built where the tennis courts are currently located. The event took place under a large white tent near Barlow and Randall halls. It housed many people, including locally important names, such as College President JoanneTruesdell, Oregon City Mayor Dan Holladay, City Commissioner Brian Shaw and many more.

The ITC building will house labs and classrooms for hands-on work experience for students. A table set out under the tent gave examples of what student’s craft, while the manufacturing department garage housed much of the equipment that will be moved into the new ITC building.

“The machine tool program starting in Clairmont Hall and then moving over here to Barlow Hall, and the building was never designed to be a machine shop,” said Mattson. “The generation before us came here and built this for people like me and my students. This building (is) now an opportunity for us to leave that legacy for the people who come behind us and I really appreciate all you supporting that.”

Truesdell thanked the taxpayers for their money, stating it will be used to make the new facility, help with future plans to bring businesses to train future students, and making Oregon City’s economy flourish.

Near the end Truesdell, and many others, grabbed a shovel, white hardhat and dug dirt.