CAREER FAIR DRAWS EMPLOYERS FROM A NUMBER OF INDUSTRIES FOR RECRUITING

Everyone needs a job, but not everyone can get one, even with the right skills. Clackamas Community College tries to fix this.

On Tuesday, April 18, a job fair was held in the Gregory Forum, tables littered the inner halls and the main room with representatives of many different companies.

“(There were) about 58 employees from different industries,” said Kara Leonard, academic and career coach coordinator for CCC.

Leonard, who was stationed at a table that had computers set out with signup sheets to check-in, greeted students and community members entering the building.

Per Leonard, roughly 250 student and community members participated in the spring career fair.

Among the many stands, included the Gresham and Portland Police. The Portland Police, standing out among everyone else, had a large chart and takehome pamphlets showing their pay, from veterans to entry-level.

At the State Farm Insurance stand, two loquacious and well-dressed men used their fine rhetoric to bring in new recruits.

Per the Economic Policy Institute from both 2015 and 2016, unemployment and job opportunity for college and high school graduates, which wonderfully sandwiches community college students and graduates, still didn’t look too sharp.

The EPI reports that in 2016, which focused on ages 17-20 for high school graduates and 21-24 for college graduates who are not enrolled in further schooling, “wages of young high school and college graduates have failed to reach their prerecession levels, and have in fact stagnated or declined for almost every group since 2000.”

Unemployment rates for high school graduates has increased to 17.5 percent in 2016, in contrast to 15.9 percent in 2007, a number that directly affects almost every student enrolled at CCC.

Thanks to the college holding the career events, students and community members can not only browse jobs from around Oregon City and beyond, but to form connections, get information and even see what they may or may not like by talking to those who work in the field, such as speaking to the Portland Police or the Federal Bureau of Investigation.

Among the students, Lars Simgha, said he was there “looking for a job.”

Shayla Giles, a CCC student, was at the event to look at jobs in the counseling field.

Not all the companies present were hiring for their factory or to be an officer for the police, one employer was present as a staffing company.

Terra Staffing Group is an employment agency that works to get people hired.

“We have a lot of open positions,” said Mandy Hudson, an employee representing Terra Staffing. “It’s been pretty busy.”

Despite the EPI reporting, along with other economic outlets like Forbes, The Fiscal Times or CNBC, opportunities are open and the college actively provides a plethora of resources for career endeavors, suggestions and means to connect with local employers.

Clackamas provides the career fairs twice in a school year; once in the fall and once spring term. The next career fair will be held next year during fall term. 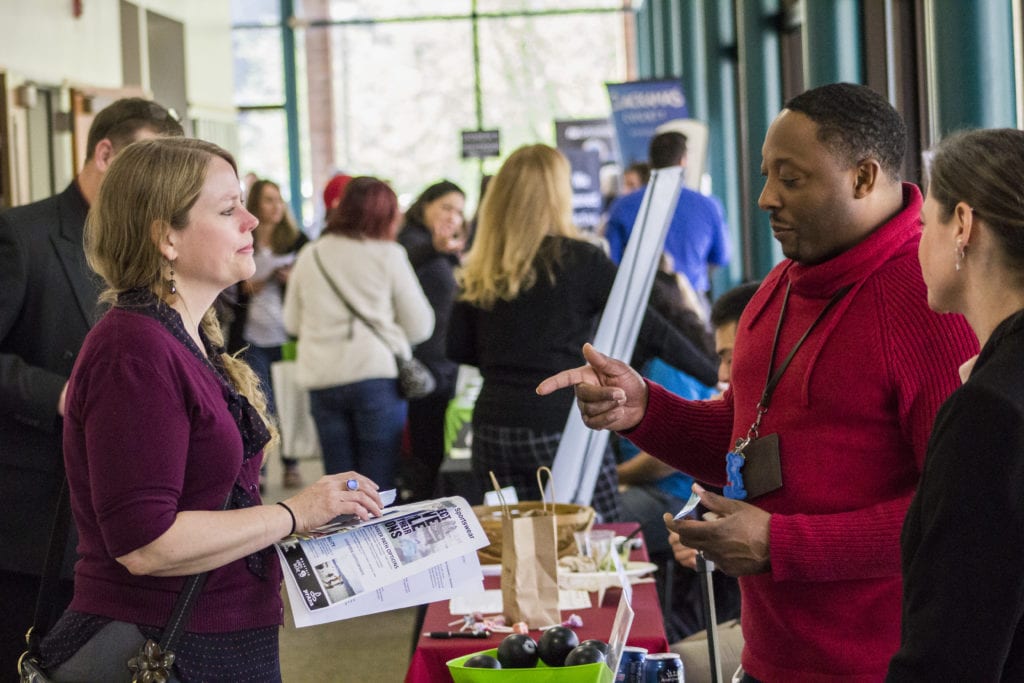