Food, serve- us: Changes in store for cafeteria

Have you been to the Clackamas Community College cafeteria lately? Did you think:

Chances are, you fell into 93 percent of students who answered the second or third option. CCC conducted a survey of staff and students about the cafeteria in April 2014 found some rather unflattering results. The general consensus? More variety, less fried food, healthier options, and this stuff is way too expensive.

The results of this survey seem to have created some movement. Sandwiches were recently re-introduced, as well as the salad bar. But is it enough? The food at the Cougar Café primarily consists of fried, grilled or greasy fair. Or as one student in the survey put it, “It’s all browns and yellows (not very healthy). [It] would be nice to have something healthier.”

On a positive note, many students found the staff to be friendly and courteous. “ e food service staff is fantastic,” said another surveyed student. The majority of students asked for healthier options and more variety.

What lies ahead for food services at CCC?  The college will be terminating its contract with Brosis Management, the current food service provider, next year. Bob Cochran, Dean of Campus Services said that a “Request for Proposal” has been submitted so that a new catering company can bid on Clackamas’ food services.

“The bid should be complete by spring, and a new catering service should be instituted by summer of next year,” said Cochran.

Why the split? Did the survey play into it?

“The contract ended three years ago and we’ve been extending it ever since, ” said Cochran. “We met with the owner and manager of the company and he wants this to be his last year as well.” Cochran also said that Brosis is choosing instead to focus its time and e ort on its barbecue catering service, Outlaw BBQ.

“It was a mutual decision,” wrote Joshua McGraw, owner of Brosis Management, in an email. “Brosis owners are looking forward to semi-retirement in Montana, and thought it was the appropriate time. We will be helping CCC with the procurement of the new food service vendor in order to ensure CCC gets what it needs.”

He also said that July 5, 2015 would be the last day for Brosis on campus. “We’ve built some endearing relationships with the staff, but especially with the student body,” said McGraw. “We are grateful for the opportunity to be a part of Clackamas Community College.”

He also mentioned that he hopes to do lots of hunting and  fishing in his retirement. So with a new food service coming in next year, what kinds of things do students and sta members want to see? Some key words in the survey included: “food carts, healthy food, more options, vegetarian/ vegan options and specials for different days of the week.”

Some students also mentioned that a better or more detailed menu would be nice, as sometimes they don’t know what options are available. 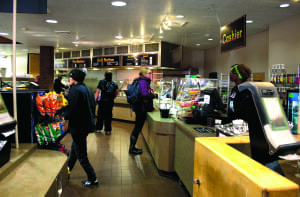