For whom the road tolls 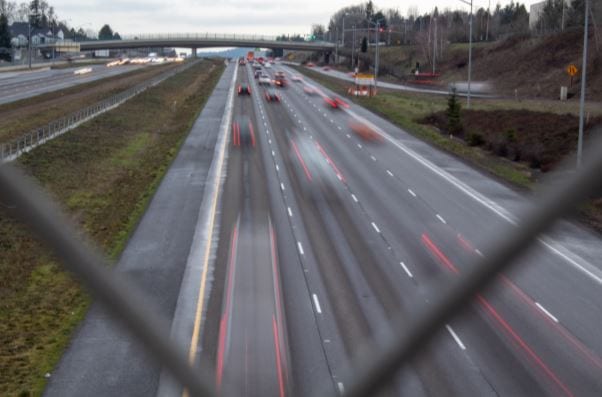 State officials are considering implementing tolls along Interstate 205 and Interstate 5. How might this affect Clackamas Community College
students and community members? The impact depends on where you drive, how often you drive, the cost and if the tolls will vary based on time of day. In fact, many aspects of the potential tolling are still undecided.

As a result of the transportation package passed by the state in 2017, the Oregon Transportation Commission was directed to develop a proposal for alleviating congestion on I-5 and I-205. The most popular proposal is to toll the Abernethy bridge, along with a stretch of I-5 around downtown Portland spanning from the Alberta Street exit to the Multnomah Street exit in southwest Portland.

According to demographics data on the City of Portland website, the northeast area around Alberta Street has one of the highest concentrations of people of color and people who live in poverty; adding tolls to their daily costs may mean driving would be cost prohibitive for many of those people who are struggling.

Some doubt that a tolling system would be implemented properly or managed efficiently. John Charles, of Cascade Policy Institute, says tolls could be a good idea if implemented properly. “If we did that, we could gradually reduce gas tax, which is already becoming obsolete with electric cars becoming more common, and we could reduce the fixed cost of vehicle ownership, such as title and registration fees. So, we could reduce the taxes associated with vehicle ownership and replace them with more precise user fees.”

Charles says this is market based road pricing, similar to how most everything else is purchased and used in the economy, comparing the non-peak hour tolling to matinee pricing at a movie theater or happy hour at a bar. “Capacity is fixed and expensive, demand is variable, so you try to get demand and supply into an equilibrium.”

“Charging people directly for the use of a road or a bridge is not a new idea,” Charles says. “What is new is being able to collect electronically, at road speed, unobtrusively, and to vary the toll rate by potentially time of day, direction of travel, day of the week, so that supply and demand would constantly be an equilibrium and you could maintain free flow conditions, which is what drivers want. And to also generate
the revenue necessary to expand the highway.”

Charles isn’t confident that the state will manage a tolling system in the correct way or reduce other vehicle ownership fees. “The way to show that you understand their [drivers’] concern is to lower other taxes at exactly the same time. If you’re going to impose a user fee, repeal some of the other generalized things, like registration fees or gas tax.”

Charles also suggests that the legislature give motorists more road supply at the same time as toll implementation, specifically, more bridges across the Columbia River and a westside bypass so commuters can avoid going through downtown.

“You start doing that, and you give motorists what they want. If you actually build new high speed highways and motorists get what they’ve been wanting for decades, their attitude about tolling would change,” Charles said. “While other states like California and Colorado and Florida especially, are building lots of toll roads, we’re just going to be a lagger. We’re Oregon. We should be used to that. When 49 other states doing it so that it’s safe and can be done, maybe Oregon can get around to it.”

Others are even less confident in the state’s ability to properly manage a tolling system. Former state representative Julie Parrish is one of the chief sponsors of a ballot initiative that would mandate any potential tolling go to a vote of the people before it could be done.

“Voters should have a right to vote on whether or not our existing freeway infrastructure that has already been built using gas tax dollars should be tolled,” Parrish said. “The legislature voted to toll our freeways without voter input. Roughly 80 percent of Oregonians oppose tolling. So, since the legislature foisted this upon voters, the only way to give voters a say is to take it to the ballot.” Parrish also shares concerns that tolling could ultimately prevent some CCC students from from attending classes. “For some students, depending on where they commute from, it could be the difference of whether or not they’ll be able to attend classes.” Parrish has other suggestions on how to fund highway improvements, “Without tolls, they could bond against gas tax revenue. They could also bond against the growth of general fund revenue. It’s really a decision making process about budget choices. Had the legislature bonded against the growth in the state general fund. They could have done one of these major projects every biennium for the last eight years.”

Another possibility is to end double coverage on healthcare for married public employee spouses. “In this case, public employees who are married can get two fully-funded sets of healthcare insurance plans. So, two teachers married would get a $17,000 to $20,000 plan per teacher per year. That cost statewide across all government workers is conservatively $500 million in excess cost. The Abernethy Bridge is
estimated at $500 million. If we got rid of that excess spending, it could free up general fund dollars,” Parrish said.

There’s another hurdle for those in favor of tolling — because I-5 and I-205 are federal freeways the state must request special permission from the federal government to implement the tolls. This fact has opened up a new debate in Washington D.C. and Congresswoman Jaime Herrera Beutler, a representative of Vancouver, is against the tolls and feels they would unfairly target Washingtonians who work in Oregon.

In a post on Facebook, Beutler stated, “It [the tolls] represents Oregon swinging the door open to place tolls at the most lucrative spots – namely on the I-5 and I-205 bridges used by working class Washington residents. Oregon knows revenue can be collected at those spots without any political recourse from southwest Washington residents who have no vote in the matter, which is why it continues to barrel ahead without presenting any kind of plan to improve the infrastructure that most southwest Washingtonians actually use. My
job is to give southwest Washington residents a say, and I’ll continue to oppose any plan that treats them unfairly and also undermines our region’s number one infrastructure priority — an improved I-5 bridge that can transport more cars and freight more efficiently across the river.”

Don Hamilton, spokesman for the Oregon Department of Transportation, says that they are exploring mitigation efforts by way of rebates and exemptions for low income drivers as well as coupons for mass transit options.

“It’s a mistake to say this is a done deal,” Hamilton says. “We are in a long period of study. It’s going to look at what types of steps can we take to ease the potential impact on the economically depressed communities. It’s going to look at what type of steps are needed to inhibit any further diversion [of traffic onto city streets]. There’s already a lot of travel on Interstate Avenue from people that are diverting
off I-5. Would there be further diversion once tolling goes in? What are the techniques that we can use there? There may be a lot of diversion onto mass transit when the tolls take place, so those are the three mitigation questions that we’re looking at.”

Hamilton says that the project is still in its exploratory phase, and that it wouldn’t be implemented for several more years. “We don’t know what lanes, how much it’s going to be, what time of day it’s going to be, those decisions have not been made yet.”

According to information from the state of Oregon, revenue to ODOT has increased by 50 percent since 2009 and forecasts continue to show an upward trend. Hamilton stressed that “The revenue from the tolls would be earmarked specifically for improvements in the corridor where they’re being made. It’s because those costs are enormous, we have an awful lot of catching up to do on work that hasn’t been done over the years.”

Hamilton says ODOT has done and will continue to do outreach with the public to take citizens’ comments into consideration.