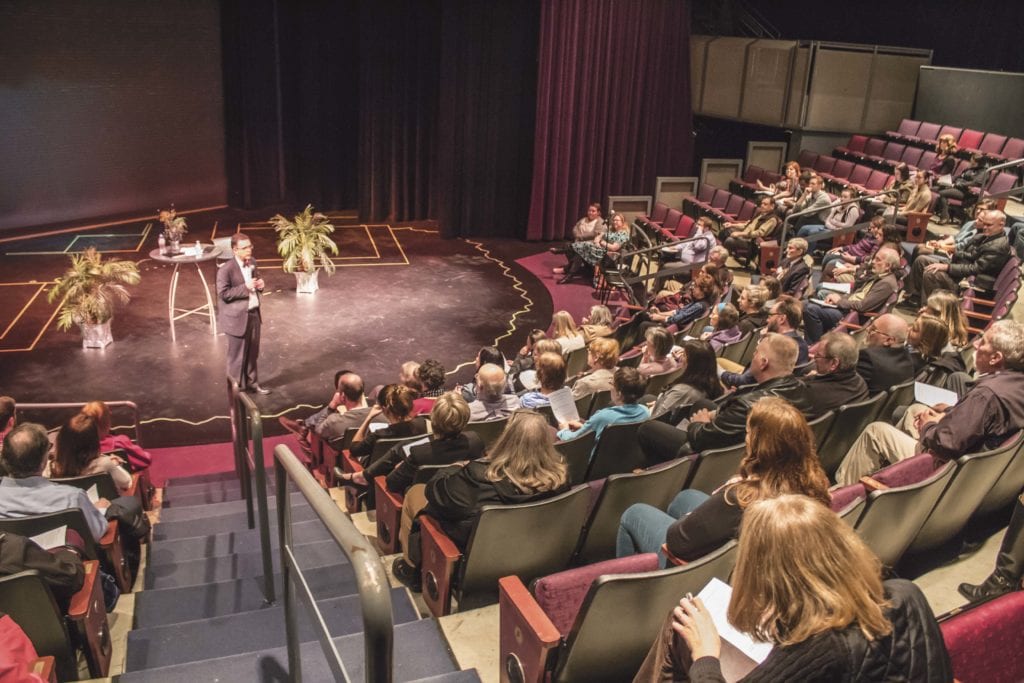 Cook’s forum was Wednesday. He took to the stage in a dark pinstripe suit, white shirt, and red paisley bow tie. Cook is currently the vice president of instruction at Clark College in Vancouver, Washington.

The audience was comprised of mainly faculty, staff and board members mixed in with a few students. All avidly read the dual biographical pamphlet and exit survey they had been given to aid the board in their eventual final selection. Each candidate will be given equal time on separate days to introduce themselves and answer questions from the audience in an open forum. No other candidate may attend another’s event.

“I’ve been kind of subtly aware of it,” said Justin McDaniels, a former student and current Program Outreach Coordinator at Clackamas, when asked about their thoughts on the selection process. “I think that I was more waiting for these open forums, because that’s when I knew I could really participate.”

Cook’s family are fifth generation residents of Clackamas County. Cook graduated from Oregon City High School in 1986. He is a first-generation college graduate and worked both on and off campus throughout his college experiences.

Cook has an easy speaking style, engaging directly with the audience. When he speaks it’s off-the-cuff and he chuckles a little when he’s reminded to use the microphone.

When audience members asked Cook questions, he answered standing directly in front of them as close to them as he could get. Cook stressed listening, building relationships, trust, and making observations as important first steps of the presidency.

“The two days I was on campus was probably the most talking I’ve done in quite some time,” he said during a later interview. Cook’s form seemed well-received and was well-intended. He said he hopes people heard his passion for the school and for the job.

The day after Cook’s forum, the second of the two forums took place. Held last Thursday, this forum featured Howard.

Howard is campus president at Portland Community College’s Southeast campus. She confidently walked onto the stage with a big smile, in a gray skirted business suit and white shirt. The audience is mostly the same group of people from the day before, with the addition of few more students, they seemed excited but were patiently waiting.

Howard of San Antonio, Texas worked multiple jobs, and received a Pell Grant throughout college. While Howard was an administrator at San Antonio College she took classes towards her associates degree to demonstrate to both staff and students that it could be done.

“The thing that struck me most, the first day I was nervous; it takes a lot of nerve to take college courses,” she said.

Howard is an easy joke teller to which the audience responded favorably. Her jokes occurred naturally. She speaks with careful consideration and answers with thought and genuine feeling. She addressed the questioner but remained standing in the center of the stage. Howard is “inspired by the collaborative inclusive culture” of Clackamas Community College and she said one of the college’s greatest strengths is that it “authentically puts students in the center of its considerations.”

Both candidates are warm, welcoming, knowledgeable of Clackamas Community College and understanding of the operations of colleges in general. The candidates stressed the welcoming student-first culture orientation on campus and seemed enthusiastic about meeting  both staff and students to engage in learning what’s important to them.

The Clackamas Community College board has a big decision ahead of them with two candidates left to go. It’s not too late to give your opinion on the final four candidates.

Two more candidate forums will take place this week, on Jan. 22 and Jan. 24 (look for a follow up in next week’s paper). The college has recorded all the forums and will be posting the videos to its website, so if you missed one, you can still see them. You may even be able to submit an opinion to the board, participation is free.