After dropping their opener, softball reels off four straight to take fourth place

The Cougars’ softball team rolled into the NWAC tournament with a good amount of momentum, but ultimately it wasn’t enough. 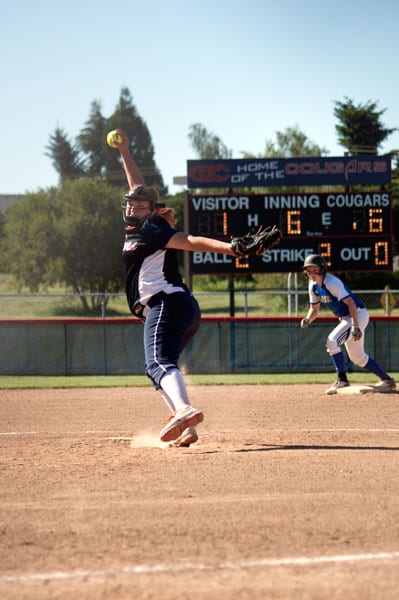 The team bounced back after their tough first round loss by winning their next four games in the one-loss bracket, but eventually lost to Bellevue, who was the tournaments number one seed.

In the bottom of the sixth inning the Cougars’ scored three runs to take a 5-2 lead. Needing only three more outs to keep their season alive the Cougars gave up six runs on seven hits and one error in the top of the seventh. They were never able to recover as they went down in order to end the game and ultimately their season

Their efforts in the tournament earned them fourth place, which is the fifth time they have finished fourth in the NWAC tournament.

Despite being eliminated from the tournament, the team still enjoyed a great season.

The season originally started out strong for them, as they won 15 of their first 17 games, and despite a shaky 0-2 start to league play, they finished the season strong.

The Cougars ended the season winning 14 of their last 17 games, including a stretch where they won eight straight. They finished with a 33-10 regular season record, and finished second in the Southern Region conference with a 12-6 record.

Overall the team finished the regular season about where they did last year. In 2015 they finished 35-10, which was two more wins than this year, but ended with the same amount of losses, so earing a top seed in the NWAC tournament wasn’t much of a surprise to head coach Jessica Buel.

“It’s kind of expected because we usually are one of the top seeds”,Buel said. ““We’ve been up and down and we’re a young team, but we have stepped up when we needed to and won some big games.”

When asked about how she thought the season went, Buel said, “I’m pretty happy how the season has gone.” She also mentioned how CCC beat all the top teams in the NWAC, which is something she was proud of.

Buel connected the team’s success to team chemistry, and how they have bonded together.

“They work as a team,” she said.“They get excited to be out there and that’s when they’ve been the most competitive.”

Other players on the team such as Emily Marchbanks, who is a pitcher for the team, also talked about the team chemistry.

“We’re all talented individually”,Marchbanks said, “but when you play softball, you’re kind of screwed unless you work together”

Though team chemistry has been a big part of the success, there have been other contributing factors.

When asked about what the team has done to do so well, Hannah Vondomelen, who pitches for the Cougars said, “Putting things aside between all of us and playing as a team and working hard consistently and having good practices.”

“I feel like we have a lot of great players that get along very well”,she said, “and that’s something we need in order to be successful.”

After a solid season, the Cougars look ahead to 2017, as they look to earn over 30 wins for the eight consecutive season.