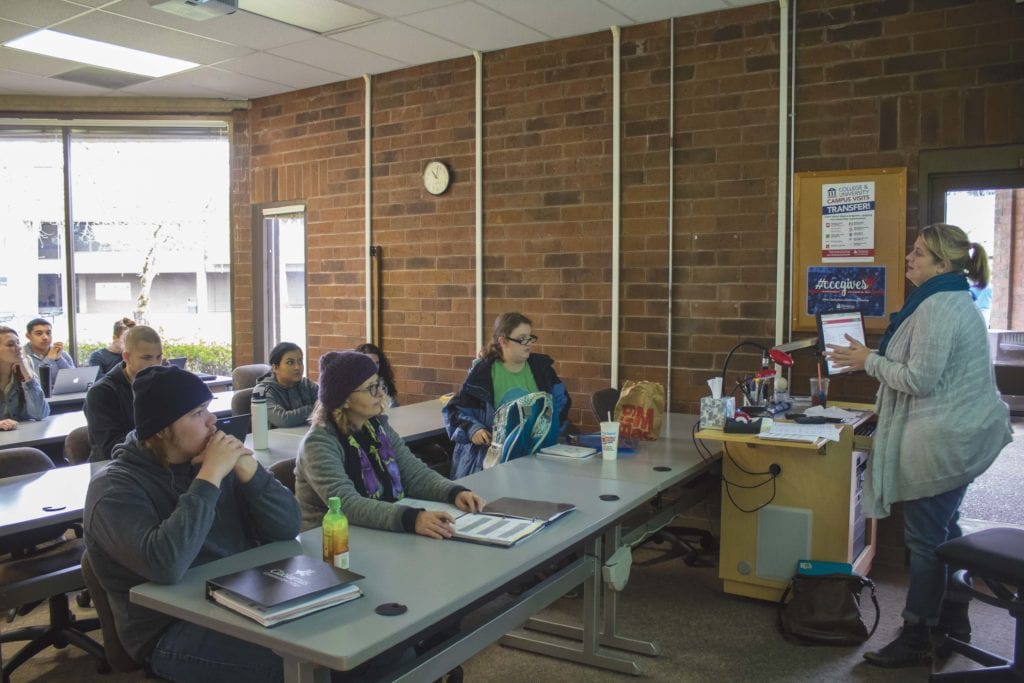 Story and photo by Jared Preble

Whether coming freshly graduated from high school or returning after a long break, the initial shock of college and the tremendous workload that follows can be overwhelming.

Without the proper tools to combat procrastination, the slope that leads to failing grades can be quite slippery. David Green, teacher and advocate for First Year Experience, said learning the right principles for a successful college lifestyle is critical to one’s academic future.

FYE is a three-part course with an instructor who educates students on how to properly handle college. Each class focuses on a different aspect of success and helps to prepare students for the long path to graduation. It has also proven to help them stay on track.

This sounds fundamental to the improving one’s grades and work ethic but has it helped students as much as it advertises? And should it be mandatory?

Jodi Stapleton is part of the advising department at Clackamas Community College and has been involved with FYE for the last three years. She said she has seen much growth in the students as well as the class itself.

“When students come back to us after taking an FYE class they are really just in a different place than they were when we first saw them. They’re more prepared, they understand college life more, they’re doing better in their classes,” Stapleton said. “Most of those students have not taken an FYE class and didn’t know that they should have or that it was available. You don’t see students who take FYE as often coming back to us needing to get that assistance. So, it’s really a foundational class and it’s an important first step.”

Ross Foster, a student who has gone through all three courses, said that the class has been essential to giving him the tools needed to maintain a steady work ethic. A veteran in his 30s, he found that FYE gave him the structure he thrived on while in the military.

“I do believe it should be mandatory and the reason for that is a lot of students when they come in from high school don’t understand what to expect,” Foster said. “Honestly, I’m in my early 30s and after the structure that I had in the military, I needed some idea for how to conduct myself in college. I was having trouble keeping up with my grades, so I came in here, and I’ve been doing a lot better since.”

While students and advocates are the bread and butter of any good course, it’s the head teacher that keeps everything well constructed and oversees all operations. Green is the brains behind FYE, and while he is not the founder of the course he has taken the helm and has made it what it is today.

He said FYE was the brainchild of Casey Sims and Lisa Nielson a few years ago. They wanted to bring in a college success course into the school. “I wasn’t involved at that time but I’m glad they did,” Green said. “It’s really enlightened me.”

Green has seen tremendous growth within the class and shared statistics provided by institutional research, that furthers his message.

“We’re proud of it,”said Green. “We try to make that transition from where they’re coming from smoother. The main thing of this course is, it makes them prepared for the rest of their college career, and as I like to say in new student advising sessions, the rest of their lives.”

Green is just one of many others who sees the potential that the course has to affect the lives of those who enroll in the class. While class sizes have grown steadily over the past three years, Green still finds that the FYE course deserves exposure, he believes making it mandatory could drastically improve the overall success rate of students at Clackamas.