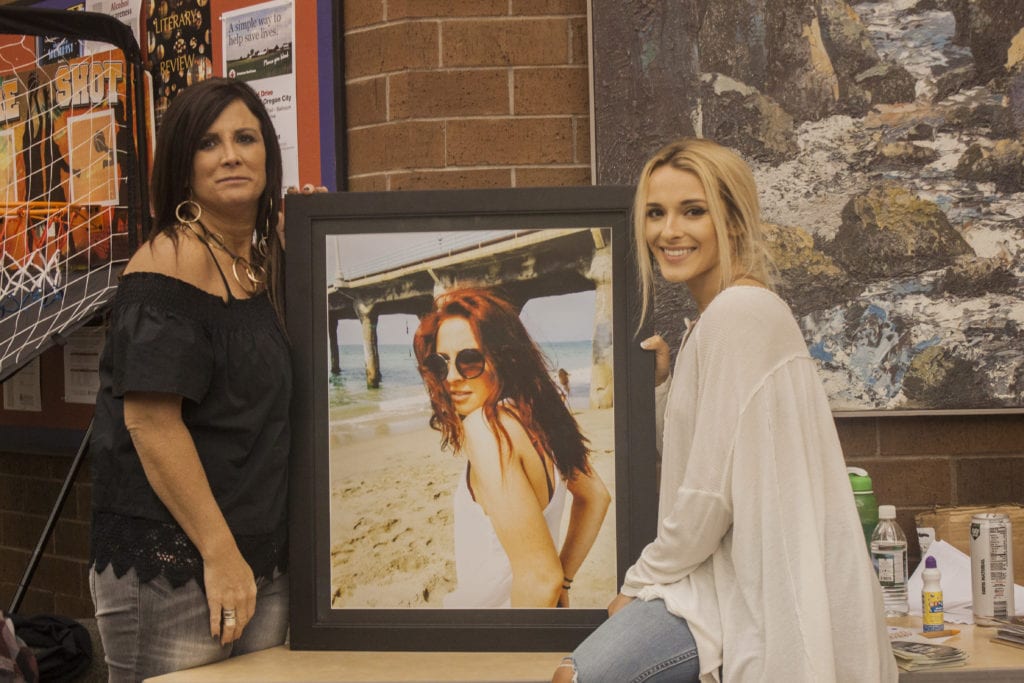 Carrie and Halle Higgins talked to students about their deceased family member, Maddi Higgins, in frame.

Story and photo by Autumn Berend

Shattered glass and a bloodstained old airbag were some of the remains that haunted the totaled silver Toyota Tundra that was involved in a crash in Sept. 26, 2011.

The totaled truck was on display at Clackamas Community College in a trailer last week, provided by Oregon Impact for “Alcohol Awareness Day,” on May 24.

Oregon Impact is a non-profit organization that provides information on distracted driving. The truck belonged to LeAnn Brooks, who was 25 and had a .195 blood alcohol content level, more than twice the legal limit.

Brooks was driving more than 80 mph west on South Holcomb Blvd. in Oregon City towards Redland Road when she failed to react to the curve going right.

It took 30 minutes for responders to remove her from the truck, which flipped upon hitting the rail and landed in the trees, tailgate up. She suffered severe brain damage, and later, having no brain activity, was taken off life support.

The trailer payed the 911 audio of people calling in and reporting the crash. Brooks is just one of many cases involving crash related deaths via distractions or inebriation.

Oregon Impact did more than set up a trailer. The organization helped the college’s yearly event bring attention to distracted driving, from texting and drinking to the passenger in the car.

Last week inside the Community Center, police officers present with a K9 at their side talked to students.

Students wore cannabis or alcohol “goggles” and tried to make basketball shots through the visual illusion of being under the influence.

Another demonstration had students and staff in alcohol goggles hold a steering wheel and walk an obstacle course on a mat without hitting anyone.

The mat was in the center of the room with a road that had figures and a mail truck on it. They represented objects on the road.

“I couldn’t see anything,” said student Lucas Midkiff. “It was all blurry and kind of trippy.”

“This mat was developed so we could use either [cannabis or alcohol] goggles,” said Lawrence. “The average arrest for driving under the influence (DUI) for Oregon is .23, which is much more than the driving limit. With cannabis out now, that’s an issue now as well.”

“What it does to your brain when you’re drinking or use a drug, it shifts everything to the left, about 30 percent. So where she’s seeing things, they’re not where they are,” said Lawerence, using a participant at the moment as an example. “She thinks she’s doing the right thing. She’s looking through that wheel, but she’s not where she is.”

Lawrence said that the different games and activities make educating the public easier and more interactive, such as a game that allows you to see the difference between using your phone and how you’re more affected when calling or texting than you actually believe.

The reason why attempting to multitask while driving is difficult, despite popular belief, is because the brain doesn’t actually multitask, it shifts from one task to the other at rapid speed, she said.

Among the people appearing at the college was a mother and her daughter who lost a family member in a driving accident.

Angel5 was started by Carrie Higgins, a West Linn mother whose 17-year-old daughter, Maddi Higgins, was killed in an accident with her boyfriend, Hayden Soyk, 18.

Four days from finishing her junior year in high school, Higgins and Soyk, a CCC student, died in a car crash after Soyk lost control in West Linn on southwest Petes Mountain Road in 2014.

Rather than simply grieving, Carrie has made an effort to educate others. After the death of her daughter, she learned that car crashes are the leading cause of death among teens. She reached out to Oregon Impact within about a month of Maddi’s death.

With Oregon Impact, Carrie started the campaign cities of Angel5, Long Live the Legacy of Five, a driving safety program.

The campaign is promoted by a grey and red softball shirt, a representation of Maddi, who was a West Linn High School softball star, who was number five on the team.

Not long after Maddi’s and Soyk’s deaths, three more followed. West Linn High School students, Cooper Hill, 17, and Antonio Caballero, 16, were in the backseat of a Honda Accord on I84 when the car in front of them came to a complete stop after missing the turn to Dog Mountain Trailhead, forcing the Accord to break. The Jeep behind them failed to break, resulting in their deaths.

Oregon City High School student, Madison West, 18, was driving down Redland Road when her Saturn veered to the left and into a Hummer, killing her.

These deaths soon gave Maddi’s number five for the campaign a whole new meaning, representing all five of the teens killed.

“Even one life,” said Carrie. “Even if we can get one person, one family that can keep their child or their brother or their sister or friend alive. Gosh, I hope then we’ve succeeded.”

Campaigns such as Angel5, Oregon Impact and more work to highlight the dangers of reckless driving and to pay attention on the road.

“If you take your attention from the wheel and come back, it’s about 4.5 seconds to reengage,” said Lawrence. “If you’re going 55 mph, that’s a football field that you’re really not paying attention.”