Clackamas Community College has partnered with Portland State University for a $24 million grant promoting diversity in research. The grant is from the National Institute of Health and according to a press release from spokeswoman Janet Paulson, the money will help underrepresented and diverse students pursue careers in health sciences, social or clinical research, biomedical, behavioral and other health sciences. Students of Alaskan Native, African American, Hispanic, American Indian and Pacific Island heritage will be supported with the grant as well as students with disabilities, economic disadvantages or a history of foster care.

CCC’s portion of the grant is about $235,522 and will be distributed over the course of each qualifying student’s four-year degree process. The grant will cover costs for dedicated advising,  Financial aid advising, summer institutes, peer mentoring, research training and direct  financial support. It is not clear yet what the direct  financial support will help with, but it could be tuition, fees, or books.

Matthew Altman, the Associate Dean of Arts and Science, and Tory Blackwell, a science instructor, explained the way the grant works over the course of a student’s four-year degree.

“In the freshmen year, [we] make sure that they have an adviser, student support services and multicultural support to make sure the environment is good for the students,” Altman said. Blackwell also added that the  first year is to make sure that students have a good foundation in their classes to be prepared as they move forward. Between the first and second year, and the second and third year there are summer institutes that students can attend.

“This is really a time for them to get more research exposure rather than classroom exposure to science,” Blackwell said. The locations of the institutes are still being determined but it can be assumed that most of them will take place at PSU. Altman explained that during the second year at CCC, students will need to take a “gateway course.” He said that the gateway course is undetermined at the moment but it will be a class that will  t in with the courses that are already offered.

A er the first two years are completed at CCC, students will transfer to PSU and  finish their degrees.  The last part of the grant takes place in between the third and fourth year. “The intent is to have students working in paid research labs as part of this experience.” Altman said.

At that point it is undecided how the student application process for the grant will work. Altman said the application will probably look similar to scholarship applications, but it is unclear whether or not it will be attached to the scholarship process that already exists at CCC.

Blackwell and Altman both suggest that students who qualify and have already started working toward their four-year degree get in contact with them. Altman said that even if it’s too early to include students in the grant, the school will still  find other ways to help. 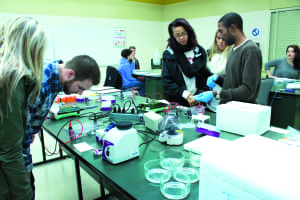