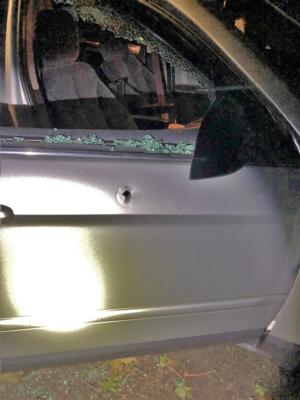 Gunshots shattered the window and left holes in the side of a car. Photo provided by Portland Police Bureau.

Police said that the driver reported that he was driving on Southeast 162nd Ave. with his girlfriend and her 6-year-old daughter when gunshots were fired at their vehicle.

Afterwards, the suspect’s vehicle passed theirs’ and began firing from the front.

When the victim made a turn to try and get away, the suspect fired into the side of the vehicle. There were at least 5 bullet strikes to the victim’s vehicle. One of the bullets lodged into the seat directly behind the little girl, but no one was injured. There are no known suspects at this time. Anyone with information is asked to call the assault detectives at 503-823-0400 or to email crimetips@portlandoregon.gov. The case number is 20-315551.

Lexie is a Staff Writer for the Clackamas Print. She is also starting to work on comics for the Print. She is majoring in Digital Media Communications creative arts.