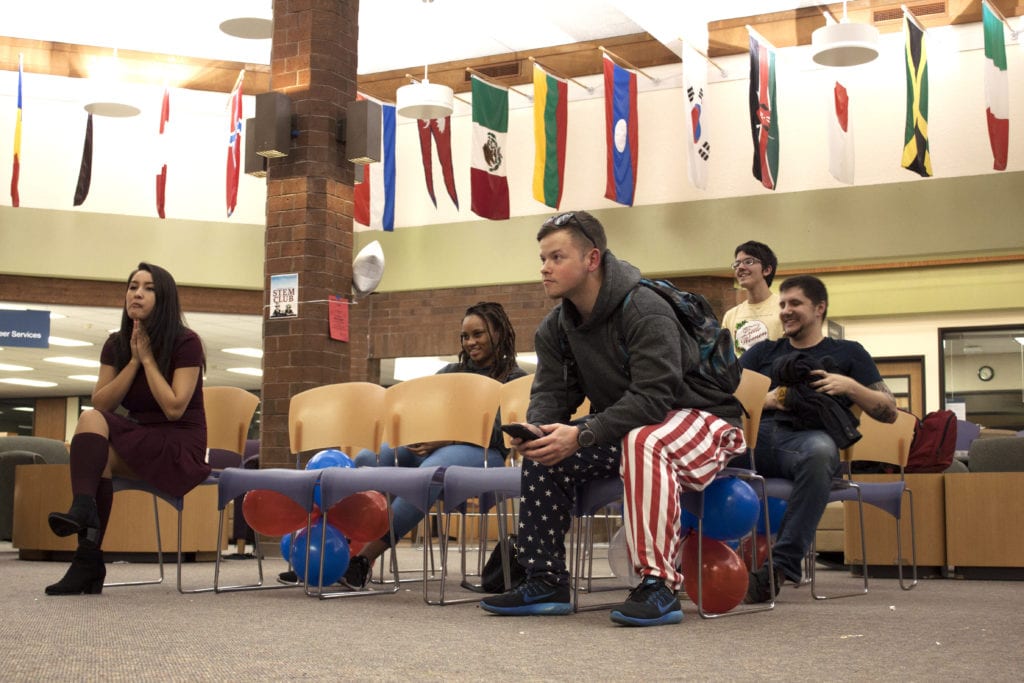 Students wait for election results at a viewing party in the Community Center Tuesday night,

By Kristen Wohlers and Collin Berend

Donald Trump (and hair) has been elected as the 45th President of the United States over Hillary Clinton in a tight race.

The college’s own president of the Associated Student Government, Jairo Rodriguez, weighed in on the election.

“I really don’t have a politician in the White House that actually represents me or what I believe is best for my community,” Rodriguez said.

This year’s election has been both historic and one of the most hated. On June 7, Hillary Clinton became the first female to win the presidential nomination for a major party. Her vice presidential running mate was Tim Kaine, Senator from Virginia.

“I would say, it’s refreshing that he’s honest, but he shoots from the hip too much,” said James Hite, the Political Science instructor at Clackamas. “Which I think is a weakness because he says things that he probably doesn’t even really mean, but it’s sort of too late.”

Controversy has plagued the 2016 presidential election, and both candidates have come under attack. The New York Times compared Clinton’s use of personal email over several servers while she was Secretary of State to Watergate, calling it “Emailgate.”

But on Sunday, Nov. 6 FBI director James B. Comey announced in a press release that Clinton should face no charges, calling Clinton’s and her colleagues’ handling of classified information “careless,” but not an intentional violation of laws.

President-elect Trump has been criticized for not releasing tax returns and for a video on which he said he kisses women he finds attractive. He said, “When you’re a star, they let you do it. You can do anything. Grab ‘em by the pussy.”

Clinton has been more vocal on the matter of reducing costs for college students as she proposed free tuition for all community college students and to cut interest rates on student loans. She further expressed her desire to end campus sexual assault.

Trump made no such claims in regards to sexual assault, and he expressed vaguer views on education costs. College students can hope, as his campaign website claims, that the Trump administration will in fact work alongside Congress in “making a good faith effort to reduce the cost of college and student debt.”

Trump has voiced hopes in regards to elementary education that may better prepare students for college. This includes investing billions of dollars towards offering school choice for elementary students, which he believes is the solution to reduce the cost of education per child and help students reach benchmarks.

Clackamas Community College President Joanne Truesdell said this election is not just about who will be the next president.

Clinton, whose campaign suffered as a result of the email situation, would have become the first female president. She has over 30 years of political experience, having held the positions of First Lady, United States Senator from New York and Secretary of State.

But with no female president, the nation heads into the next four years with a billionaire instead. The reality TV star has seen business failures such as Taj Mahal Casino and Trump Steaks; but the Wharton School of Finance graduate has owned profitable businesses as well in the areas of real estate, sports and entertainment, according to his campaign website. He has hosted the Apprentice, Celebrity Apprentice, and now he will host the American people from his seat in the Oval Office.

The presidential inauguration will be held on Jan. 20, 2017, and Trump, along with Vice President-elect Pence, will begin his new gig promptly at noon.

Blake Swan contributed to this story.