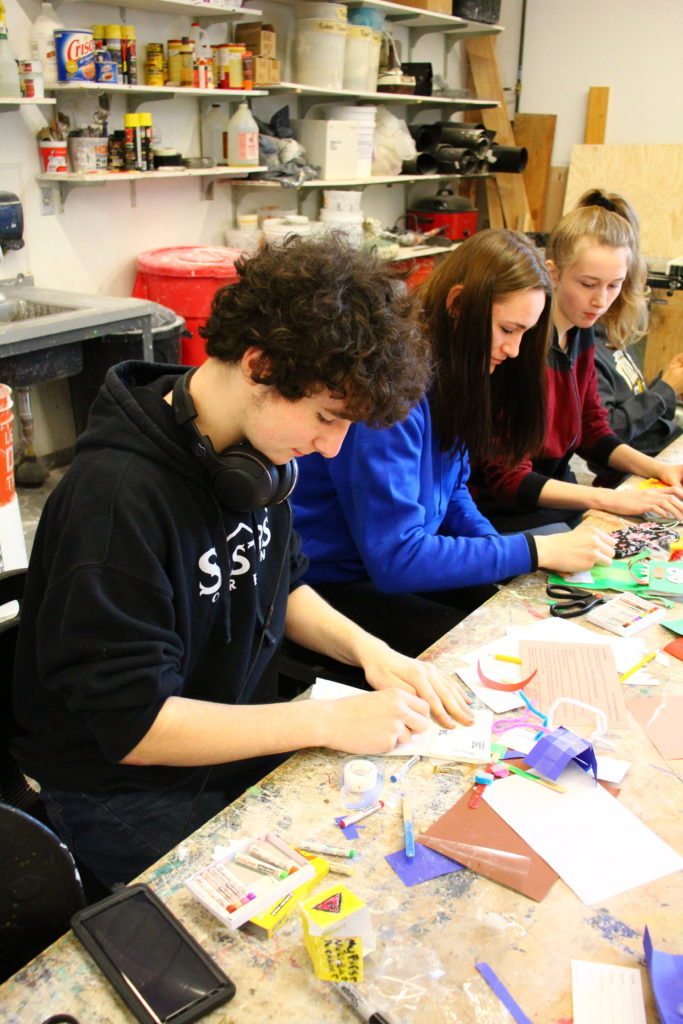 The Clackamas Community College Skills Competition buzzed with excitement on Thursday, Feb. 28. In classrooms around campus, a different kind of person expressed their passions and interests in their own way. Touring through, the feeling of doing something real prevailed.

In the art competition, students were chatting and having fun, expounding on their ideas and trying to channel those ideas into a physical thing.

This year’s category—a mystery to the competitors until they arrived—was Terrible Toys. Making toys is something no one was familiar with, but everyone was excited to try.

Some students wanted to make interactive paper playthings, while others went for full-on wooden structures. Still others were mapping out complex puzzles or games.

The overall vibe energized the room, putting a will to create into the minds of the fledgling artists.

Students could switch between an art room and a workshop with all the supplies they could ever need.

Courtney Milbur, a first time competitor, sketched of a strange heart-adorned pig spider. With oil pastels and pipe cleaners in hand, she was deep in work trying to adapt that idea into a toy.

“I usually like doing statement pieces,” she said, “but that’s why I came here. I want to try new things, do something different than I would normally do.”

She, like many others, came to test her skills in new ways and become better.

On the other side of campus, Tom Landeen was operating the car show. Instructors and their friends brought their rides to show off, and to raise awareness for the automotive repair class at the college.

Landeen described all the old, new, and straight up weird cars that the community had to offer. He’s been doing this for a long time.

“Eight years so far. We’ve got some crazy stuff, and it’s nice to let people see stuff like this,” he said.

Among the classic Fords and high-rise Stingrays, the most standout vehicle had to be the Dragula: a beefy golden drag racer with a coffin for the body and a skeleton for a driver, made by Dave Lentz, a friend of the college. But even more fun than baroque-inspired racers were the people. They all talked about their passion for cars.

The show let a small group with a single interest connect over some of the coolest machines around. They could talk technically without having to dumb things down or apologize.

Going from room to room around campus, the concepts being practiced ranged greatly. In one room, biology students quietly took a test, while in another teams rushed around, screaming about Legos and laughing at their creations. But every room had the same sense of unity from being with like people. This is exactly what college should look like to high schoolers: full of opportunity to specialize and find lifelong friends that share your interests.

Natalie Colbert is a member of the Associated Student Government on campus, and Thursday was her first time running an event. She has been a part of this competition ever since her freshman year of high school.

“I’ve done art, Legos, photography and some sort of senior testing thing,” said Colbert. “It was super fun to do, and I want to show kids that they can make a difference with this.”

Her first job was from the job fair going on at the same time as the competition. She has been molded by the sense of unity this event brings, and now is determined to help make it better than ever.

As the day wound down, students converged with their friends again, going back to the normal grind of high school. The window into college life and the excitement of expressing their passions can start something special for everyone involved.

Henry Waxenfelter, a student at North Clackamas Christian School, was the first-place winner in the journalism writing Skills Day competition. He reported and wrote this story in less than three hours during the Skills Day event. Tyler Burch won the photojournalism competition.