Hope and help for houseless 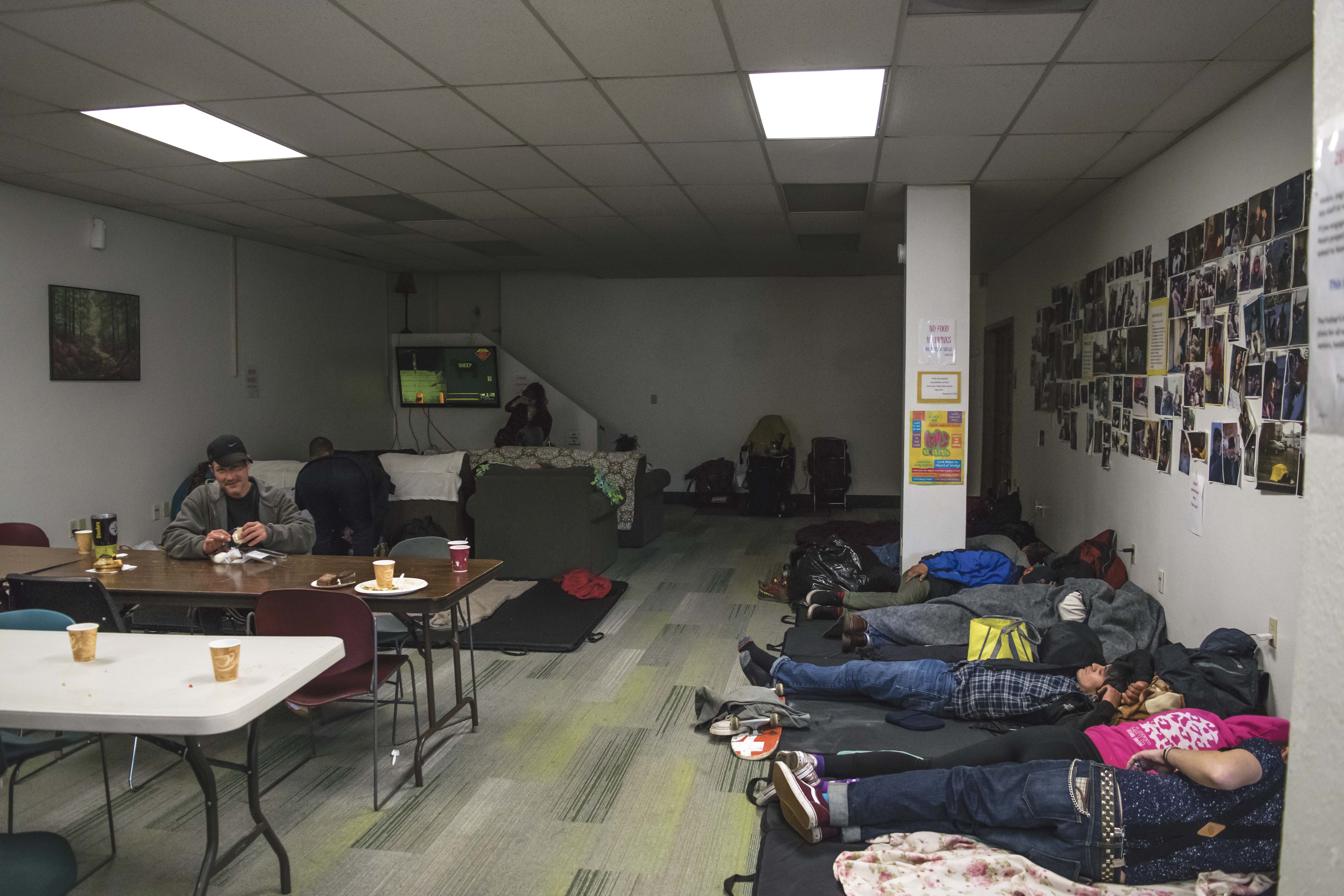 Story and photo by Jeanette Wright

This past week, Oregon lawmakers approved the addition of $5.2 million to the state’s 2017-2019 budget to cover costs of emergency and homeless shelters.

Oregon City doesn’t currently offer a lot of support to their homeless community, and during the coldest time of the year, the lack of shelter is much more obvious, and much more dangerous.

In November, a fire in a homeless camp in Oregon City claimed the life of a woman living in the camp with her boyfriend. Following the tragedy, Clackamas County declared a six month state of emergency regarding homelessness and lack of shelter.

The lack of resources, shelter and information together create a deadly combination affecting not only the homeless and potentially homeless population, but also the securely-housed population.

Clackamas Community College is at the end of a bus line, so some people getting off at the stop simply don’t have somewhere else to go.

“Sometimes, on occasion, we’ll have negative interactions with people who are not affiliated with the college,” said CCC Director of Campus Safety, Phillip Zerzan. “We’ll have folks that will get off [the bus] here, that … just find themselves on campus, and sometimes they have limited resources.”

“We’re not a social service provider. We’re not really equipped to provide services to people that are houseless,” Zerzan said. “So, our goal is to connect people with resources that [that’s] their role.”

Rachel Morgan, the associated student government’s community wellness director, said the ASG volunteered at The Father’s Heart Street Ministry as part of their training, and Morgan hopes the Cougar Cave will eventually be accessible to the whole community.

“Because we’re a community college, I think we really focus more on the community, and how our campus is open to people,” Morgan said.

The Father’s Heart Street Ministry is one of very few homeless resources available in Oregon City.

The Father’s Heart, located a few blocks from the Oregon City Swimming Pool, is a day shelter, but sometimes is available overnight, if the sleeping time temperature is predicted to be 33 degrees Fahrenheit or lower.

The Father’s Heart is a faith-based ministry and serves more than 100 people every day.

With only four employees, it’s mostly run through volunteers, and Robin Schmidt, the executive director at The Father’s Heart, says about 30 volunteers are needed each week.

The ministry serves breakfast and sack lunches to take away every day, and on Saturdays, volunteers from local churches take turns driving a van to the Oregon City Bridge to serve breakfast.

Schmidt says the lack of local resources for the homeless is something she hopes will change, that change is starting with the Father’s Heart ministry.

“It’s true that there isn’t enough going on,” Schmidt said. “This place offers a lot of resources in one spot, which makes it a nice place to go to. You can take care of a lot of different things all at one time.”

Some of the resources offered at The Father’s Heart, besides meals and a roof, include donated clothing, showers, and help connecting to other services: mental health partners, housing programs, even job opportunities.

Mental health is a huge problem in the homeless community, and Schmidt hopes more mental health resources will become available in the future.

“People living in homelessness deal with a lot of depression, poor self-worth, get yelled at a lot,” Schmidt said. “People just don’t understand how hard it is, [they] think you should just make a change and it’ll all go away. It’s not that simple.”

Other volunteers frequent the shelter, from someone coming in and offering haircuts, to a doctor coming in once a month to see patients and wrie prescriptions. They even bring in a foot care team.

“Most people haven’t, but obviously, if you’ve seen the feet of the homeless, it would change your perspective [on the] homeless altogether. It’s just really sad what people have hidden under their socks and shoes.” Schmidt said.

Being a faith-based ministry, The Father’s Heart aims to practice their beliefs.

“We believe that the best way to reach people with the love of God is to show it in the way that we serve people,” Schmidt said. “So, we’re all about hugs and smiles and learning people’s names here.”

Even with the shelter, there’s an obvious lack of places to go.

“There’s no place for them to go, and everybody wants them to go and there isn’t. There just isn’t any,” Schmidt said.

“Everywhere you go, you’re shooed out, unless you have money to spend,” Schmidt said. “Especially if you have a bunch of things with you, and it’s a little ‘unsightly’ for some people to handle.”

“To me, in Oregon City, a lot of the homelessness is hidden. People stay pretty hidden, it’s not in your face like you might see in other places,” Schmidt said.

The lack of education about homelessness is a huge part of the problem, said Schmidt.

“People just don’t understand. That’s why I always invite people to come here.” Schmidt said. “Almost inevitably when people come here, it’s not what they expected, when they know it’s a day shelter, they are pleasantly surprised, they almost always come back to donate or volunteer somehow. It’s a real eye-opener.”

“The people that volunteer always tell me, ‘I had no idea how grateful everybody is’.” Schmidt said. “A lot of people, they help each other. This is a great community, from what I’ve seen, I’ve learned a lot from the homeless community. On their worst day, they’ll give you the shirt off their back. You and I might think, ‘Oh, I need to hang onto this one, but I’ll get you something else’ They just don’t think like that.” Schmidt said.

From jobs like answering phones, to drivers, fundraisers, organizing clothing and food drives, or even attending the showers, anything helps.Donations and volunteers are always needed.

The Father’s Heart has received donations from all kinds of people, from churches and companies, to individuals offering financial support.

An eight-year old boy recently donated the birthday gifts he received, and a girl donated $20 of her allowance, along with a note sending prayers.

“That’s the kind of things that keep us open.” Schmidt said.