How to save a life

On Nov. 3 through Nov. 4, American Red Cross hosted a blood drive at Clackamas Community College from 10 a.m. to 3 p.m. in Gregory Forum.

The Red Cross goes through Washington and Oregon and is one of the larger centers. The college has been partnered with Red Cross since the 1970s and generally has multiple blood drives a year.

Although Red Cross is known for its blood donation, they do much more. The Red Cross covers everything from CPR, babysitting courses and certifications to disaster relief and support for America’s military families.

“The Red Cross started in Europe and the American Red Cross just wanted to do the same thing the Europeans were doing,” said Staci Crane, Account Manager in Blood Services at Red Cross.

“We don’t care who is fighting who, you’re hurt, you come here. We’re humanitarian. We’re not political. We want to help people no matter what, where they come from in life, what’s going on. It’s kind of a neat organization, I love working for them.”

CCC blood drives have been very successful. “The student government group has done a killer job of getting resources rounded up,” said Crane.

Cindee Lacuna, a CCC graduate and former Red Cross volunteer, donated blood Wednesday morning and had nothing but positive thoughts on the process and the organization.

“I just think it’s a good charity to do. It’s such a need and its easy,” said Lacuna, “I highly recommend it. I got both of my kids to start donating when they turned 17.”

Lacuna has been donating for 27 years and has given approximately 39 units of her blood. According to Lacuna, the process of donating is very simple and only takes about an hour of your day.

Not everyone’s experience is as easy, however. Red Cross has many things that may disqualify you from donating. The main reason would be your iron levels.

“Hemoglobin is the number we use to determine your red cell concentration and give us a rough estimate of what your iron levels are.” said Red Cross staff member Garrett Wood.

“Women can be on the lower level on average of what you need to donate, which is 12.5, 11.5 is a perfectly health range but just not enough to donate.”

One student was declined from donating blood for the day due to her hemoglobin levels.

“I came in at a 12.0 and they want you to be at a 12.5 for your hemoglobin levels to donate,” said Amanda Edelkamp, second-year student at CCC and Red Cross donor. “My iron levels were too low, and it’s probably because I had a whole vegetable dinner last night instead of having any protein, but it was delicious, just not enough protein. I can donate again tomorrow if there is a place to donate.”

Even though Edelkamp was unable to give blood, she is still a supporter of Red Cross. “Normally they come back every three months, so I’ll come back and donate here again,” she said.

Traveling to certain countries also may deem you unqualified for giving blood. Getting a tattoo that did not come from an Oregon licensed shop will suspend you from donating for a year, and before moving on to donating blood, Red Cross has privacy booths to ask a series of questions about your health.

To donate blood, you may call and make an appointment or they also take walk-ins but you may experience a wait. For registered donors, Red Cross calls or sends you notification of blood drives being held near you.

“I got a phone call, read the paper, did an interview and then I donated,” said Red Cross donor Kurt Knell, who has donated about six times. 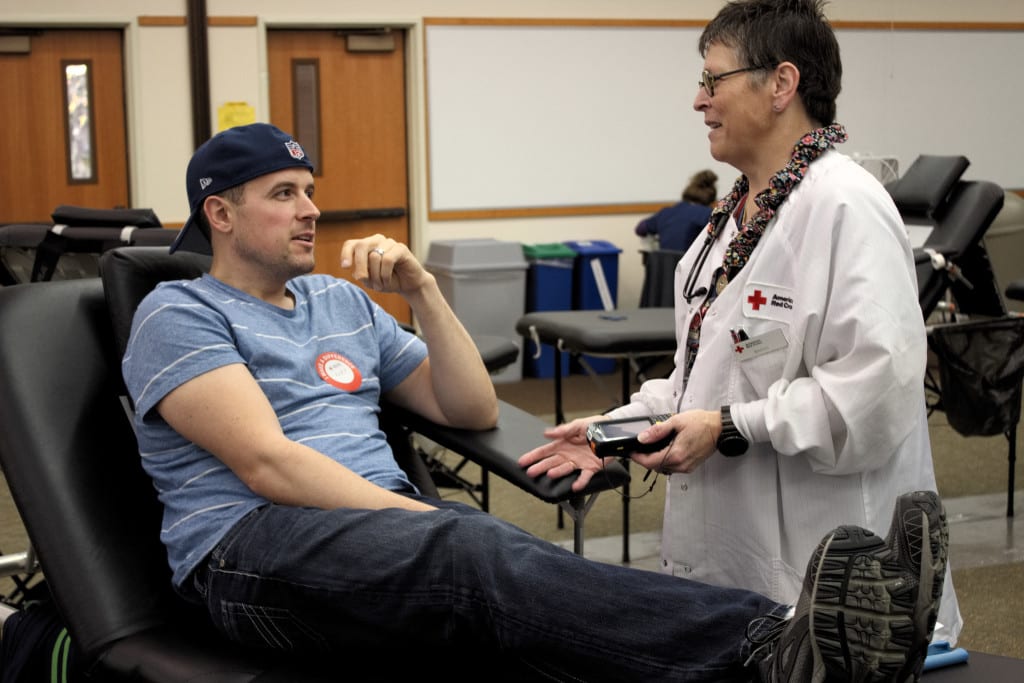 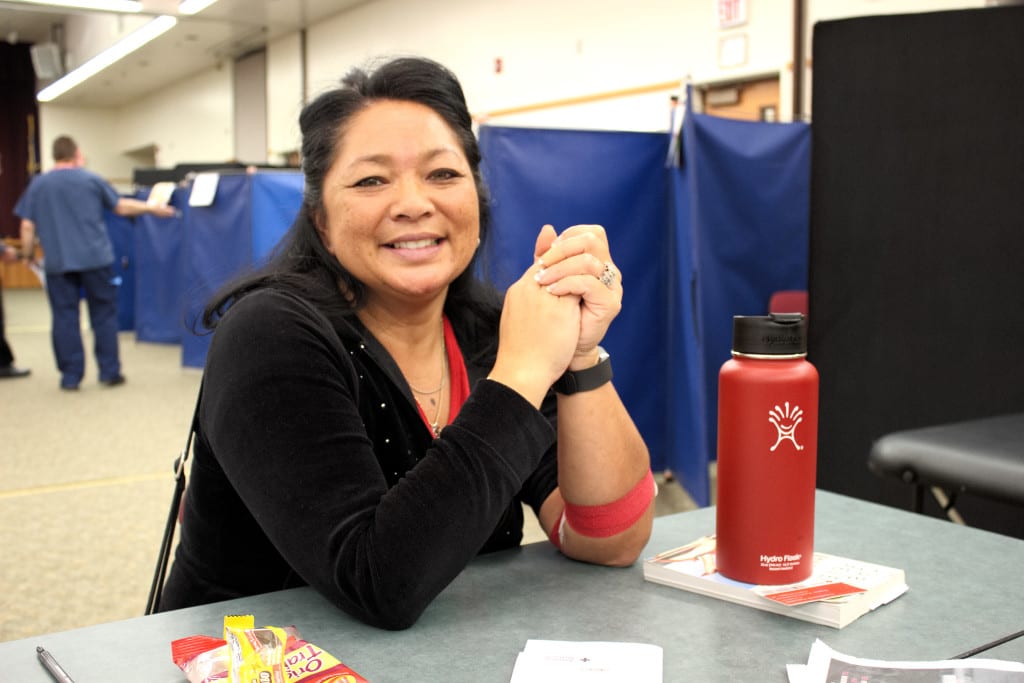 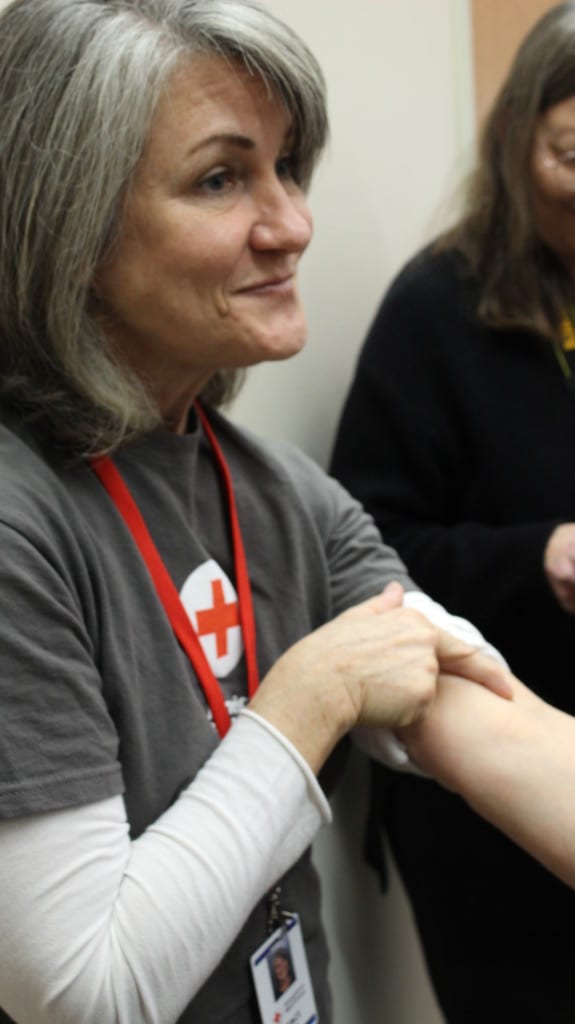 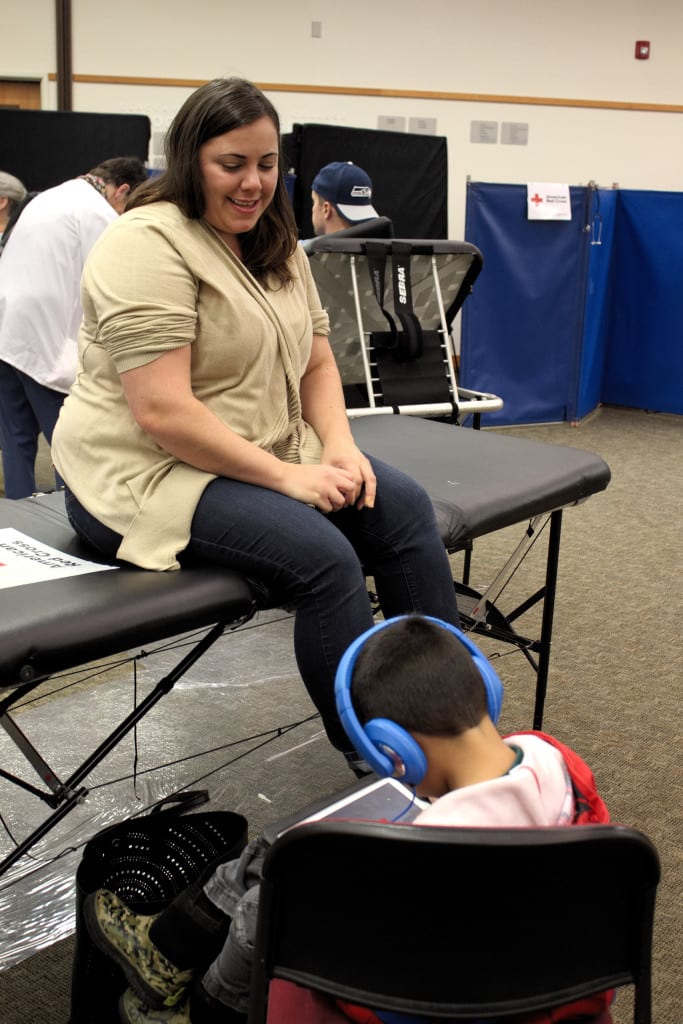 Catherine Raffaell giving blood while her son waits patiently by her side. 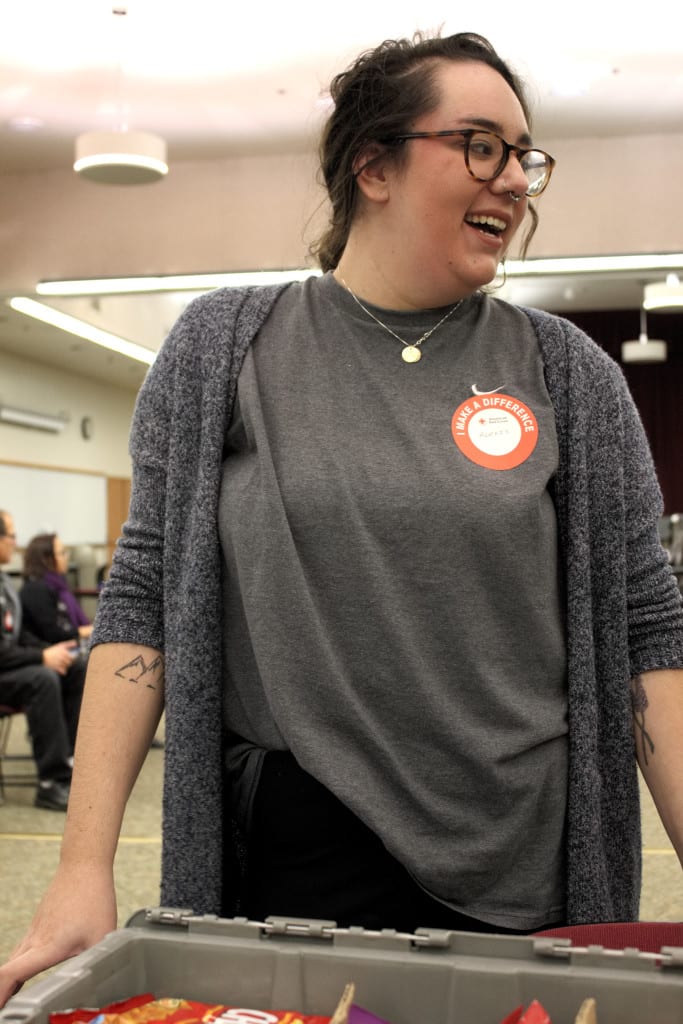 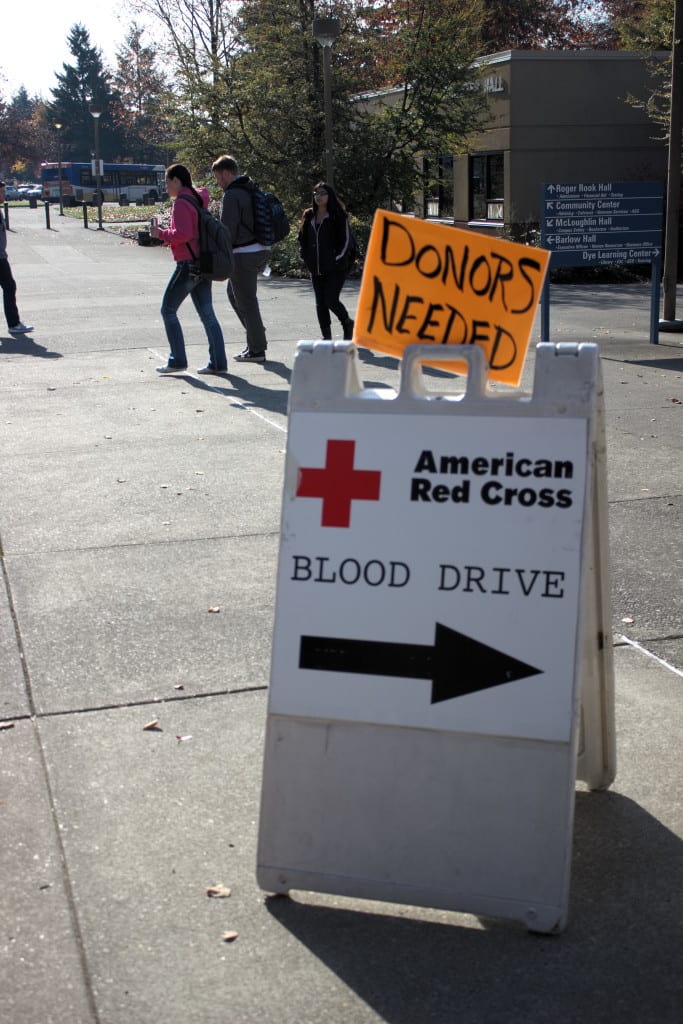 Red Cross was short on donors Wednesday morning resulting in putting out a hand written sign outside of Gregory Forum.