Madalena Larkins, vice president of Clackamas Community College’s Associated Student Government, will be the student body president next year. We sat down with her to find out what the ASG does, why the GPA requirement was lowered and what her plans are for next year.

The Clackamas Print: When did you decide you wanted to join the ASG? 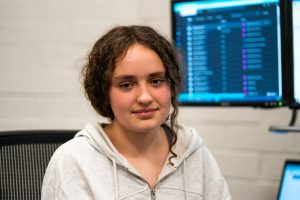 Madalena Larkins: I’m actually dually enrolled, so I’m still in high school. My first year at CCC was fall 2020, and I saw that student government was hiring, but I didn’t think I was eligible since I was still in high school. Towards the end of the year, I decided to just try and apply, and I was hired over the summer. I was initially hired to be a senator in the Multicultural Center. That was where I started out fall term of this year.

TCP: What does the student government typically do?

Larkins: We do a lot of different things. We have eight different departments, and each department does a different thing. We have a Community Wellness Department that runs our food pantry. We have the grants department which gives out grants to students. We have the clubs department which regulates clubs on campus. There’s the campus affairs department which hosts events like trivia nights. There’s the executive team which is the President, Vice President and Secretary. Then the administration department which basically just does admin work. We also rent out Chromebooks for free to students. We used to rent out textbooks and things like that. We’re basically just a resource for students all around. Of course, the big thing that you would expect the government to do is to represent the student body. We do that on college committees on the President’s Council, on the Board of Education, on the Foundation. So whenever the College wants student feedback, they come to student government to see what students want.

TCP: How many people are in the student government?

Larkins: There are three positions in each department, and we can fill more than that. Typically there are around 25 positions but they’re not always filled; they don’t always need to be. We only have one person in our promotions department, but we don’t need anyone else there. I would guess maybe there are 12 to 15 people here right now. That’s not as much as there will usually be, but we’re doing just fine.

TCP: I see that one of the proposals is to lower the GPA requirement from 2.75 to 2.0. Any insight as to why that is being proposed?

Larkins: That was something I was really pushing for. I just didn’t think someone’s GPA was an indicator of whether or not they would be good for student government. Most other things, like positions in campus leadership, financial aid and staff jobs on The Clackamas Print all require you to have a 2.0 GPA. I just thought it would be more equitable.

TCP: As vice president, what are your responsibilities?

Larkins: There are five main ones. The first one is being a hiring manager. Someone applies for student government, I get their application, I read the application, then I make contact with them and I set up an interview. I also represent students on the Foundation Board of Directors, which is basically the body that raises money that’s given out in grants and scholarships directly to students. We also do evaluations for each ASG member at the end of the term to see how they did and what they can improve on. I’m in charge of running that process. Traditionally, the vice president would run the election process. Because I’m running for office, someone else is doing that because it would be a conflict of interest.

TCP: What will you be doing as president?

Madalena Larkins is a former member of The Clackamas Print.