Teaching at Clackamas Community College normally means going to one of the three campuses or online. Traveling to Memorial Coliseum to teach the Portland Winterhawks’ players is a bit abnormal.

About four years ago, CCC started working with the Portland Winterhawks. The goal is for the players to have options. In case hockey does not work out, they will have college credits.

Instructors from CCC have taught the Winterhawks sport and exercise psychology, personal finance and more.

Courses are also scheduled differently and are not the usual 11-week class. Due to the players’ crazy schedules, the Winterhawks organize the classes to fit accordingly. The classes last the length of the season, the end of September to the end of March, and the instructors host their classes at the Memorial Coliseum.

Sue Johnson, the educational adviser for the Winterhawks, said the team feels strongly about having good education available for the players. Johnson looks for classes that are transferable and will also be of interest to young men.

Johnson said, “[It’s] just as important for them to be working on their minds as working out.”

The Winterhawks are a part of the Western Hockey League a junior professional league. Johnson said they are the only team that requires its players to take classes.

One of the players, Dominic Turgeon said, “It’s helped me a lot, how they make kids go to school here. I feel like it’s very important that we do this.”

The players’ ages range from 16-20. Only the players who are out of high school will take the college classes taught by CCC instructors. The high school aged players will attend classes at a local high school.

None of the boys are local. Many of them come from Canada or other U. S. states and some have even come from Europe.

Learning how to keep control of a bunch of hockey players seemed to be a common challenge for CCC instructors.

The players are currently taking two classes, the history of rock and roll and Writing 121. Sue Mach is teaching Writing 121.

The players are working on digital stories, which are personal narratives told through voiceover and pictures. Mach’s only requirement was for the players to be honest.

“The most important thing as a writer is your voice and telling something that is original as your finger print,” said Mach. At first the players were reluctant and didn’t know how to write. As the class has proceeded, the players became more open to writing. Mach said the personal narratives have been outstanding because they were coming from a place that was true to them and hockey was a common thread.

“For a lot of these guys … hockey was a way to put meaning back into their lives or get their lives back together or focus on something when everything else in their life was going crazy,” said Mach.

The players were sharing some very personal stuff about them, from times of depression, to trying to become a better person, to dealing with parents divorcing.

The guys come from different backgrounds and Jack Dougherty said the team isn’t going to look down on their teammates for sharing personal stuff. In fact, they like hearing about it because it helps them get to know each other better.

Keoni Texeira and Skyler McKenzie both said they liked Mach because she puts up with them.

“We kinda get rowdy, once in a while,” said Keoni Texeira. “She always arguing back with us, so it’s fun.”

“She pushes us,” said Dougherty. “It’s a tough job to teach a bunch of teenagers who, as much as the league would hate to say it, we aren’t here for school. We’re here to play hockey and go to school in our off time.”

Sport and exercise psychology was taught by Keoni McHone. Being the CCC track coach, he is used to working on keeping control of a group when there is an agenda that he needs to address.

“We’re into it for probably … [the] longest I’ve ever had a group do it before. And one of the guys drops it. And then he starts running towards the door and a bunch of the guys jump on top of him,” said McHone. “I would never see that in any of my other classes.”

McHone learned to relate to the players by attending their games and playing some magic card tricks on them. The card tricks would relate back to the course material.

When the players were learning about biofeedback, McHone had them run up and down the stairs to get their heart rate up. He would have them stop immediately to see who could reduce his heart rate the quickest.

After the first day of homework, the players were overwhelmed and some said they were completely lost and that’s when Maslyk knew she had to change her entire class.

One thing, Maslyk said, that increased the players’ curiosity was a video that showed stories about professional athletes who had millions and are now broke.

Teaching players from other countries presented Maslyk with the task of teaching players personal finance in a currency they were unfamiliar with. She compared the different currencies, used commercials and defined terms to help the players get a better understanding of the U.S. dollar.

Some players had parents that set them up with stock accounts. As players learned about personal finance, they became more interested in those accounts.

“That’s really nice to see them get an interest,” said Maslyk. “They were just so sure at the beginning this was going to be a boring math class and they came out feeling more empowered and confident with their money.”

Maslyk said her younger brother was a junior hockey player and now owns a goalie school in Phoenix, so she’s aware about how their minds worked.

“Because their mind is really on their first job, which is hockey and school is second,” said Maslyk.

In her last class, the team surprised her with gifts and gave her a hug.

“Of course I have season tickets now,” said Maslyk. “I think I got as much out of it as they did.”

Communication instructor Kelly Brennan has taught multiple classes to the Winterhawks along with David Green, an intern for him. The classes have been public speaking, mass media and social media and interviewing.

Regarding the interviewing class, McKenzie, who is taking college classes for the first time, said, “That helped because, I mean, throughout the season you do a lot of different interviews and stuff like that. It helped you to adjust to the atmospheres that you’ll be put in front of.”

In the public speaking class, Brennan teaches about the different genres of public speaking. While giving a lecture on tribute speaking, Brennan explained people could get emotional when talking about someone near and dear to them. The players thought that would never happen to them because they were hockey players.

When the day of tribute speaking rolled around, one player spoke about his mom and how she had overcome breast cancer and the sacrifices she had made. During one of the stories the player was recanting, he became overwhelmed with emotion. The player was reaching for the previously scoffed at tissues that Brennan had put on the podium. Other teammates were getting overwhelmed with emotion too.

“For me that was a nice breakthrough to the guys because they have his tough exterior that they’ve got to put on as toughguys,” said Brennan. “And to be able to see that guard dropped and to see the humanity that they really have.”

One assignment in the mass media class made the players had to do a 30 second commercial on themselves. Green liked watching the players advertise themselves to a NHL team as to why they should be picked by that team.

Some of these players are the descendants of former NHL players and know that the Winterhawks are shaping them to hopefully get drafted, if they haven’t already, by a NHL team.

The biggest compliment Brennan felt was after his first year of teaching the players. Former Winterhawk player, Brendan Burke, put a shout out on Twitter, Instagram and Facebook thanking CCC and Brennan for teaching the Winterhawks how to speak in public.

Brennan and Green follow the players, both past and present, on social media. Green really likes the Philadelphia Flyers and follows former Winterhawks player Taylor Leier, who is now with the Flyers.

Brennan is a Chicago Blackhawks fan. However, if one were to walk into his office, one would find a Winterhawks bobblehead
of Bredan Leipsic that Leipsic gave to Brennan. Leipsic recently made his debut NHL for the Toronto Maple Leafs on Feb. 13.

Some other players Brennan and Green have taught who are now either playing or been drafted by NHL team are Derrick Pouliot, Nic Petan, Oliver Bjorkstrand, Anton Cederhom and Chase De Leo.

They attend games, too, and encourage other instructors to do they same if they teach the Winterhawks.

“One of the most important things anyone can do, if they are going to teach the Winterhawks, is go to their games,” said Brennan.

Workforce Training Coordinator, Teri Olsen, said the Winterhawks really like Brennan and they try to figure out what he can come teach.

As for the rest of the instructors, Turgeon said they have all been good with the team.

“They all worked with us very, very good. You know, when we’ve need help, they’ve always been there and just giving us the time that we need for our work too,” said Turgeon.

The next instructor for the Winterhawks has yet to be determined. To find instructors, Olsen contacts the department chairs to find out who is available. There isn’t an instructor sign up list partly because a lot of people still don’t know about it.

One night is teacher appreciation nightand they announce their partnership with CCC and it has become public.

She can see the program refining each year but they’ve got a pretty good thing going on right now. 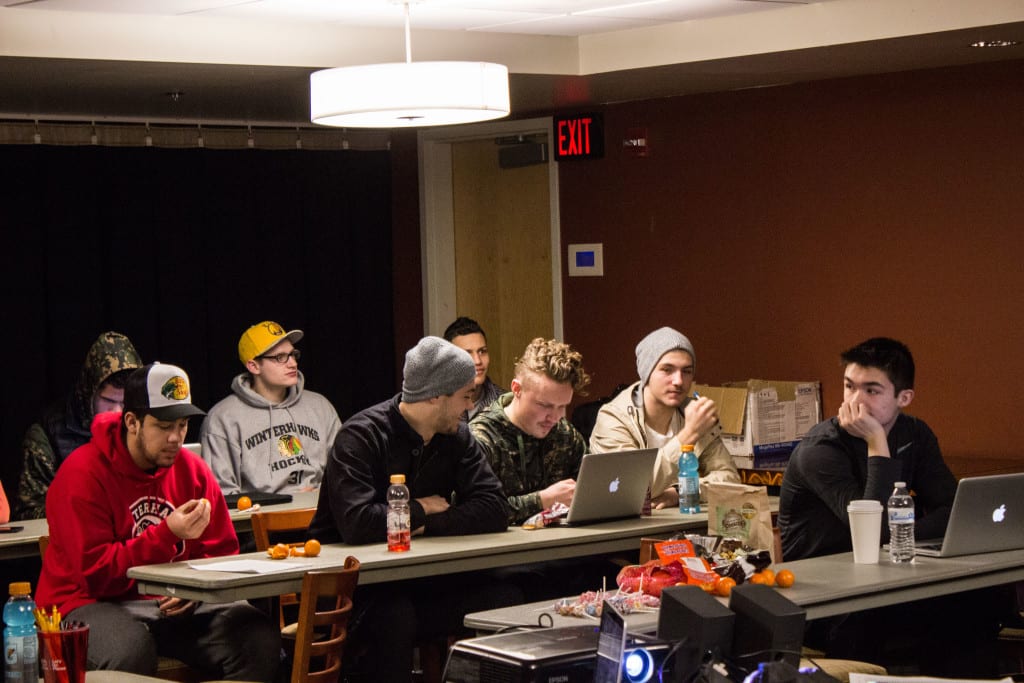 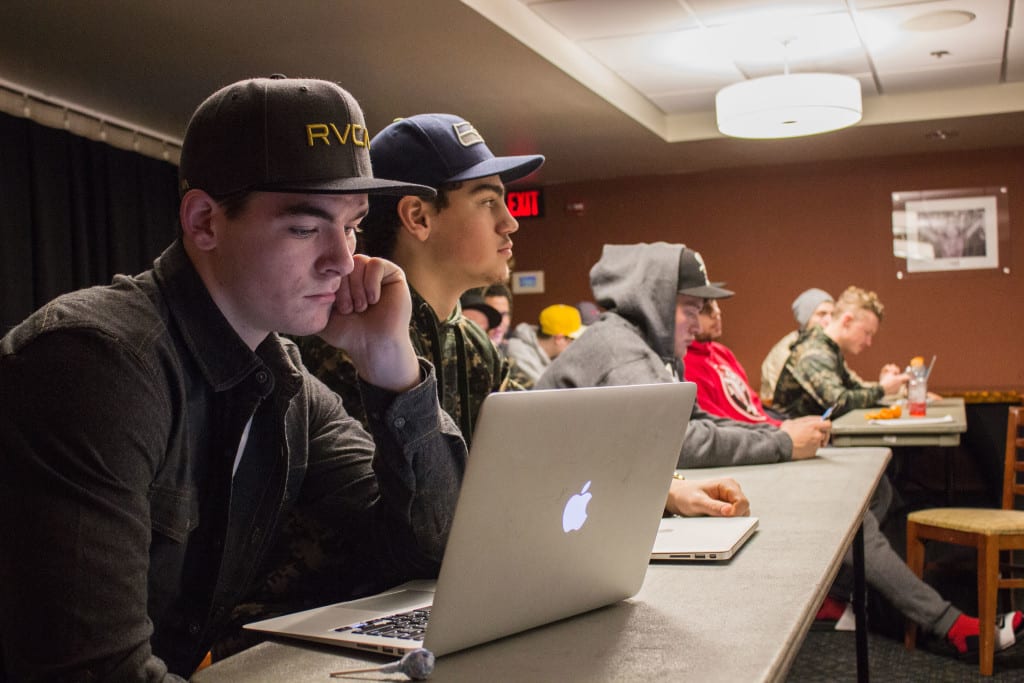 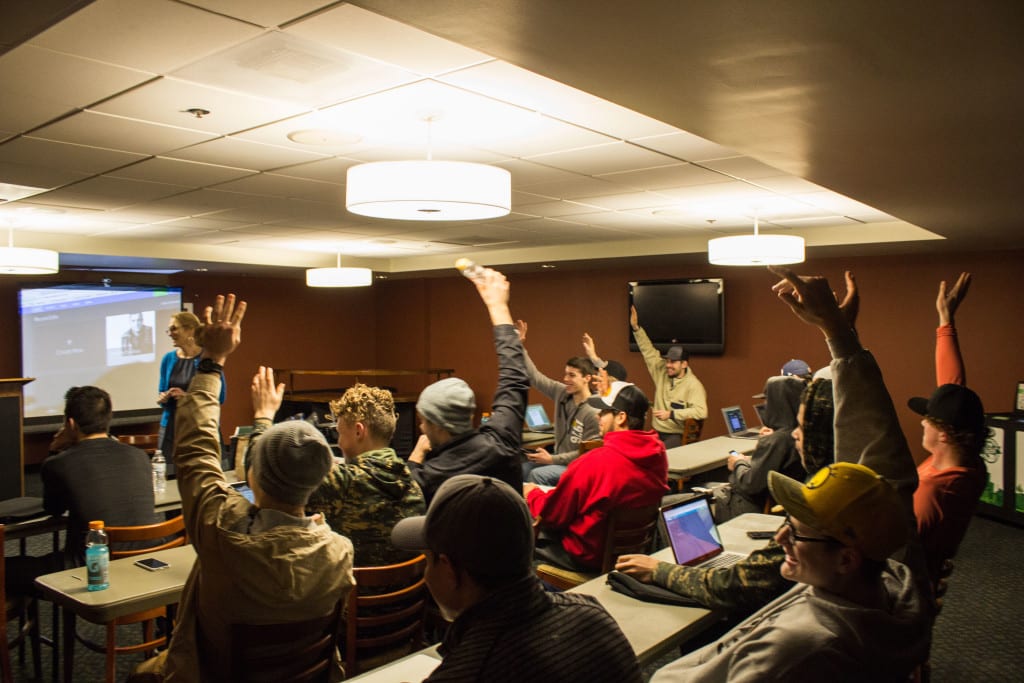 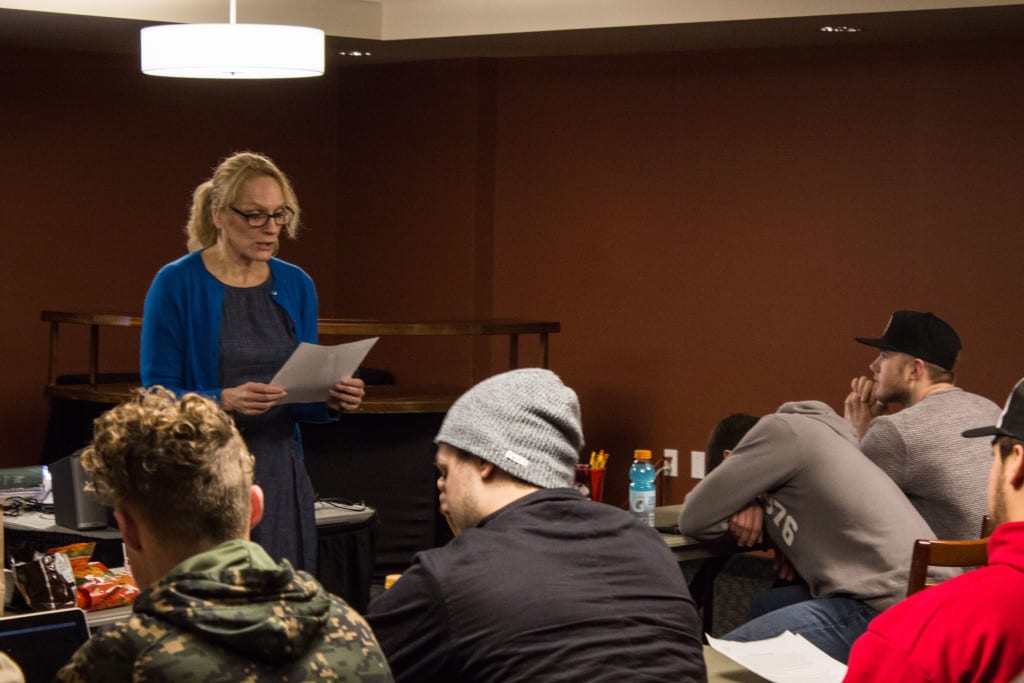