Letter from the editors 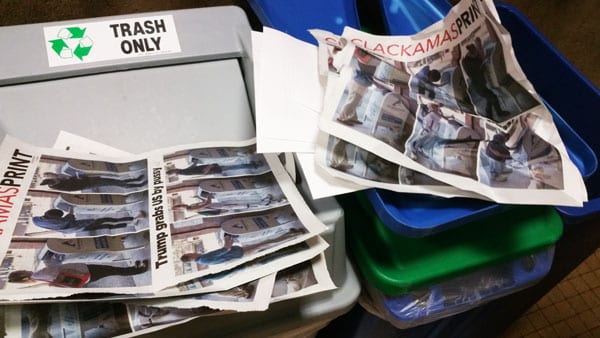 Vandals ripped the covers off of the Nov. 9 issue of The Clackamas Print and threw them in the trash in Randall Hall. Elsewhere on campus, papers were cut in half, stolen or otherwise destroyed.

We received both passionate praise and decided disapproval concerning the cover headline from our last issue, which read: “Trump grabs US by pussy.” Did he not?

We heard students laugh when they read it, some staff members told us it made their day and many students proudly shared it on social media. But we saw others wince. A full-time instructor grabbed stacks of copies off the stands, emptying the bins in Niemeyer so people couldn’t see the cover. Then in Randall, someone ripped the covers off of all the newspapers there, leaving the rest of the stories intact. In the Community Center, we found piles of papers in the garbage and recycle bins.

If you are offended by the chosen term, then yes, yes you ought to be. It’s not our word. We did not place this word into the conversation of this election, but it is there.

No, we would never introduce that word. This play on Donald Trump’s original comment was born inside of a room full of intelligent and politically minded males and females who voted for different candidates or write-ins, while some left the presidential space blank due to inner conflict. Let me be clear, these are people who care about the marginalized, the abused, the minority, the outcast, the everybody. People who did not intend to offend and who did not seek to exacerbate the already present division in our country.

With bold, recycled words we articulated the truth of the results: Trump seized the presidency even as his spoken words linger.

We made a choice, based on our constitutional right to freedom of speech, a right that our founding fathers felt was so important that they placed it at the top of the list.

To suppress this conversation of the facts is to ignore it; it is to sweep it under the metaphorical rug because we can’t bear to have it repeated. That gets us nowhere. Progress is sometimes painful. We ought to face what lies openly atop the rug because The Print refuses to sweep, and use it to propel us.

Our headline may have come out too soon, too strong for some. But it is time to accept what is. Follow pantsuit and take the high road like Hillary Clinton did in her concession speech. Trump has been elected as our nation’s president, bringing with him hair and flaws a plenty. Regardless of who sits in the White House, we still have the ability and the power to effect change. But we must refuse to ignore conversations about sexism, racism, prejudice, violence and every other thing that seeks to divide us, and become what we once claimed to be: a united nation.

To view the previous cover and the accompanying story “Hair defeats pantsuit,” visit our website at theclackamasprint.net. The cover can be found under “cover archive.”