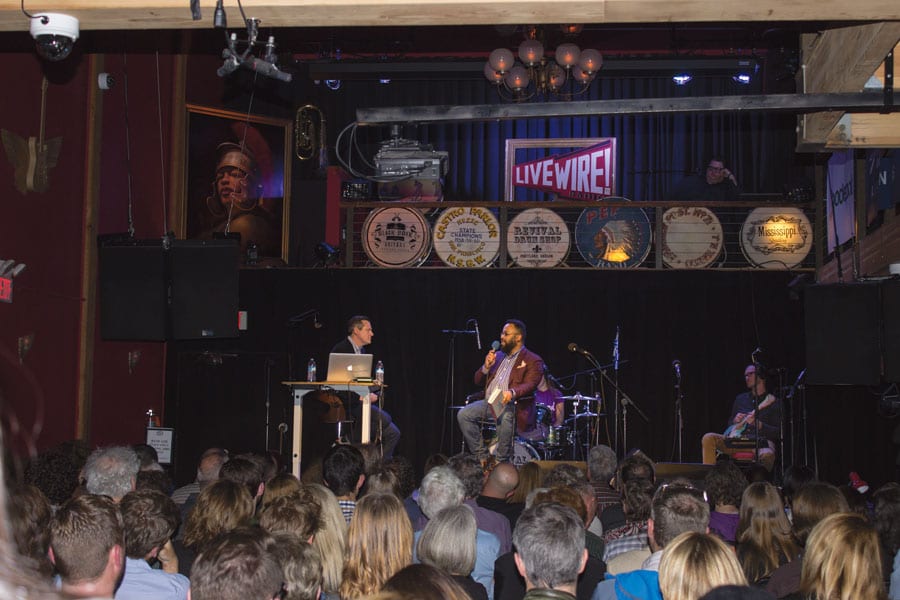 Story and photo by Kristen Wohlers

The variety show is recorded weekly in Portland and then aired on radio stations across the country. Chemistry abounds between the show’s impressive and witty host Luke Burbank and his sidekick Jason Rouse, who sits above the stage.

The April 27 show was recorded at Mississippi Studios in Northeast Portland, adjacent to the “Bar Bar” (as they call it), hence the smelling and the tasting. It’s easy to grab a bite and one of Oregon’s best beers beforehand, or take it on in for the show.

The most recent show on April 27 featured people who are a “pretty big deal.”

In light of Prince’s passing the same week, the show started with a call between Burbank and Andrea Swenson, a personal friend of Prince.

Swenson, a music journalist, told Burbank, “They talk about him like he is a caricature of a person, but in my experiences I really feel like I got to glimpse him as a human being, a very sweet and funny and smart and shy man.” She continued, “He was a human, a very complex and beautiful human.”

Burbank went on to invite guest Kevin Young, a poet who read from his latest collection, “Blue Laws.”

Next up was the musical group, the von Trapps, real life descendants of the Captain and Maria from “The Sound of Music” fame.

The younger von Trapps grew up singing folk songs with their grandfather, who was portrayed as Kurt. However, the group has their own modern folk sound, which boasts angelic four part harmonies. To the dismay of fans everywhere, the von Trapps are calling it quits for now. They played their farewell show in Portland on May 3.

Before the von Trapps returned for a final song, Jack Ohman took the stage. Ohman, former cartoonist for “The Oregonian,” is a recent Pulitzer prize winner, but he’s still waiting to see the $10,000 that comes with the win.

The shows can be heard on the radio and on Live Wire’s website, http://www. livewireradio.org/episodes. But guests of the live show get perks that listeners don’t, like those Cajun fries, seeing Rouse’s cartoon drawings for Ohman and playing games like “Prince or Craig’s List ad?”

The next live show is May 11 at 7 p.m. and features former Oregon Duck Joey Harrington and author Peggy Orenstein. Visit livewireradio.org for more information.