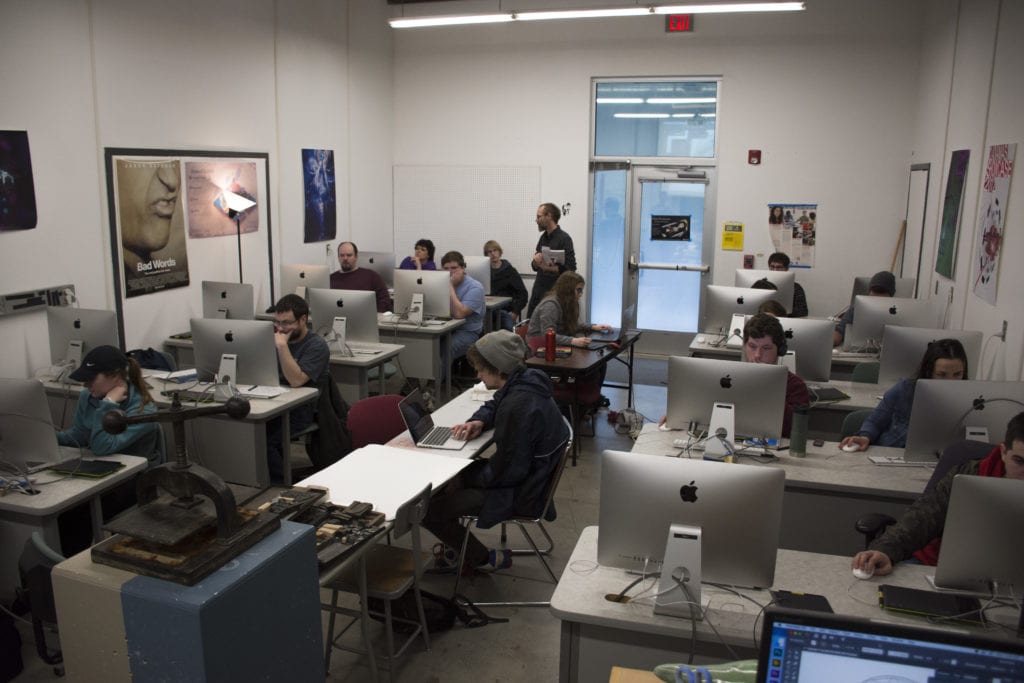 Photo by Sam Weston. One of the few Mac labs on campus, located in the art center.

From digital art design to video editing, Mac computers are seen as an industry standard. From the Hollywood hits that you can see in your local movie theater to the digital art found in many studios, there’s a good chance it was once edited or created on an Apple product.

Despite the college supporting programs that lead into many of these fields, Mac computers are in very short supply and they are not officially supported by the school’s information technology services, or ITS. Instead, those that wish to use a Mac computer are asked to seek support through Apple.

Why is this the case? The answer comes down to priorities.

“Since the percentage of Macs on CCC campuses are about only seven percent versus the Windows operating systems (OS) at 93 percent, the ITS staff concentrate on the densest OS in order to be more effective with the largest percent of the machines,” said Baird. “Mac systems represent a completely different technology paradigm from Microsoft systems with a dramatically different skill set, and because of that, ITS recommends that all Macs are purchased with a support package from Apple. It is more cost efficient and helps ITS concentrate where they are needed the most.”

This begs the question; should Macs make up a larger percentage of the computers available at the school?

Mark Devendorf, digital film instructor, is a longtime Mac user, but isn’t sure that they are necessary anymore.

“I used to stay on the Mac because of the old version of Final Cut Pro, but now I edit on Premiere, which is cross platform,” said Devendorf. “Macs are so much more expensive that PCs, and they used to be a lot better, but I’ve heard PCs are pretty decent these days, so my next computer that I buy, might be a PC.”

Despite this, he also said that he still prefers to use Macs and has been attempting to get a Mac with Adobe Premiere, video editing software, into the library for student use. He did express concern for some of the forced features included with Windows 10, such as the inability to turn off automatic updates with the home version of Windows 10, as well as the amount of personal information collected and sold by the operating system.

Kelly White, the administrative assistant for the art department, stated a similar opinion, specifically that while it’s nice to have Macs around, they aren’t strictly necessary in today’s world.

The Vice President of the STEM Club, Austin Parrish, gave a differing opinion. “I think they are a great tool for artists to express their opinions and stuff like that,” said Parrish. “Mac computers have always been known for creativity and they also inspire art students to be creative.”

He also believed that having them available would boost creativity in students, and that the benefits outweigh the high entry cost.

Whether Mac computers are still a necessity in today’s schools is unclear, but it appears that in the eyes of many here at CCC, there is much less of a need for them than there has been in the past. As alternative software on Windows platforms improves, many may make the jump to the alternative operating system for the sake of convenience, leaving only those who prefer to platform for its ease of use and reliability, rather than its unique software.