Mark Gamba has served as the mayor of Milwaukie since 2015. Photo courtesy of Mark Gamba.

Mark Gamba has shot photos for magazines ranging from National Geographic to Sports Illustrated. Currently, he is the mayor of Milwaukie, Oregon. He is in his second term and has lofty goals, including making Milwaukie completely environmentally stable by 2040. After his final term as mayor is up, he plans to run for Congress or county commissioner.

The Clackamas Print: How did you get your start as a photographer for National Geographic?

Mark Gamba: I wanted to do that from the time I was about a junior in high school. I went to a community college and took two years of photography, got an associates degree in photography at Colorado Mountain College.  And then, I spent the next eight years either working a job that paid me really great wages like surveying or I was travelling and shooting. I was building up my portfolio, improving my skills and beginning to really start my career. I started shooting for a lot of different magazines. I shot for Sports Illustrated before I got to shoot for National Geographic. It just turned out that an editor that I had worked with at Sports Illustrated moved over to National Geographic Adventure, about the same time somebody proposed a story to them and proposed me as the photographer. She had worked with me and really loved my work and that is how it ended up happening.

TCP: What was your favorite environment to shoot in?

Gamba: Underwater; if given my choice of all other things, I would probably choose to shoot underwater. I absolutely love being down there. The life that exists down there is extraordinary. We sort of think of fish as being dumb animals that don’t have emotions, that don’t think, that don’t reason. I have photographed my partner dancing with a manta ray. That same manta swam past me and then paused right in front of me and posed and looked me right in the eye. I got this great picture and then it moved on. I’ve done a dive following one octopus as it hunted and watched how brilliant it was.  And it was definitely using logic to catch the prey that it was after.

TCP: What was the riskiest situation that you were put in when trying to get a photograph?

Gamba: There was that shot of a juvenile whale shark that was on the cover of National Geographic. It is actually my computer’s screen saver. That whale shark avoided killing me. I was down there and I knew the whale shark was coming from a certain direction. I saw it and I took a quick breath and I dove down because we were working on snorkeling, not tanks. The sharks don’t like the bubbles. So I dove down to the depth the shark was and it was swimming right at me and I started swimming backwards to keep it in frame with this very wide lens. I was thinking that eventually it would turn away, but at the very last second, I realized it was not going to turn away. I tucked the camera housing into my chest so I wouldn’t hurt the shark and ducked under its mouth. As I was rolling down the belly of this school-sized shark it occurred to me as I passed that massive tail that if it whacked me I would be knocked unconscious and I was already out of breath so I would have drowned. And it didn’t, obviously. I popped up, swam over to the dive boat and climbed up. The captain of the boat said, “That was wild! As the shark passed over you, it kind of rose up in the water column and as it flew past you. it stopped finning.” So the shark was trying to keep from hurting me. 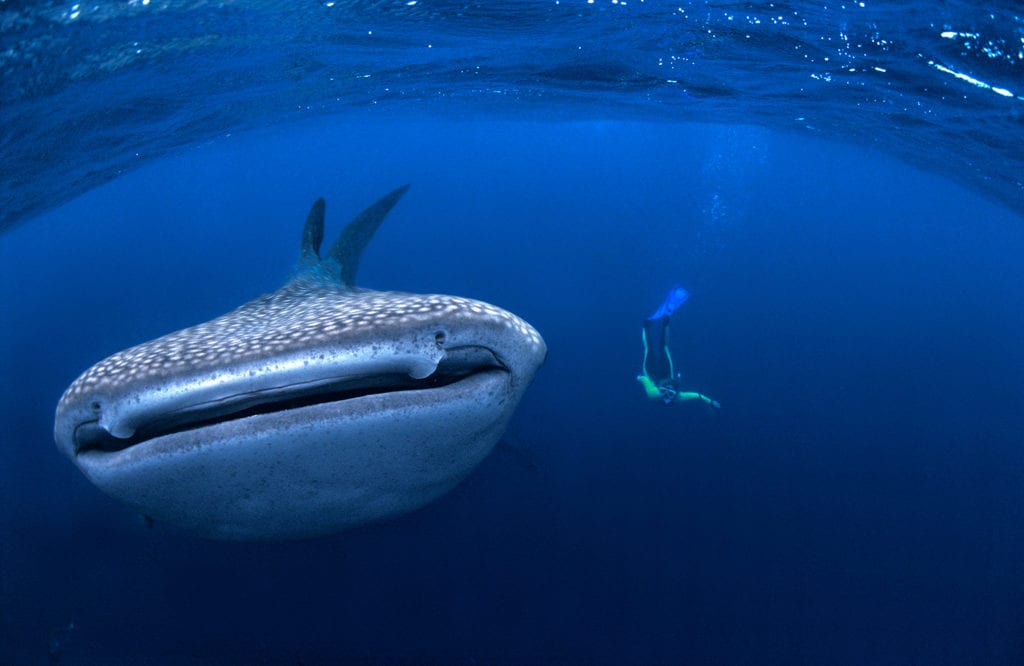 TCP: Is climate change the reason you wanted to get into politics?

Gamba: Yeah, that’s exactly what got me into politics. I think it was when the 2000 election occurred and the biggest climate champion in the senate lost to an oil man. I was depressed for two years and then started working on trying to get into politics to do the work myself.

TCP: What was it like transitioning from working for National Geographic to being the mayor of Milwaukie?

Gamba: It is a whole lot less fun to be the mayor of Milwaukie. When I was shooting for the Geographic, I was shooting for other people as well. I was a freelance photographer. I was doing a lot of other projects, but I was my own boss. Even though people think of the mayor as being the boss of the city, it is virtually a powerless position. In most small cities it is just one vote out of 5 or 7 depending on how many people are on the council. There was a sense of powerlessness and a sense of I have to work really hard to get to a decision; a decision I would have made instantly, I had to convince four other people, or at least two other people.

TCP: The goal for Milwaukie is to be completely environmentally sustainable by 2040. How is that going?

Gamba:  We wrote a new vision for the city of Milwaukie. The opening line of that vision was, “In 2040, Milwaukie will be a flourishing city that is entirely equitable, delightfully livable, and completely sustainable.” There are pages and pages of details about how we get there. One of those details was that Milwaukie will be a net zero city by 2040. There’s a lot of ongoing things, but I would say that we are on track to be a completely sustainable city by 2040.

TCP: Are there certain skills you developed as a photographer that have been beneficial to you as mayor?

Gamba: Yeah. When you are shooting journalism, you are shooting reality. If you get an assignment that says we want to see this beautiful glacier, waterfalls, and palm trees, if it doesn’t exist in reality, you cannot go shoot that. A psychologist once told me that on a really good day a really perceptive person is perceiving about 70% and everything else is stuff they are overlaying on reality. Being forced to deal with actual reality on a day-to-day basis in order to do my job is a real advantage.

TCP: Your term as mayor of Milwaukie ends December of 2022; are you planning on running for re-election as mayor or run for some other higher office?

Gamba: I have already run for re-election; this is my second term. They do not pay you to be mayor of Milwaukie and I am going broke doing this. For that reason alone, I probably won’t do this again. I ran for Congress two years ago against Kurt Schrader because he was not good on the climate. It was in the middle of the pandemic, so it did not work out so well. My goal is to run for higher office. I have groomed a young woman to be the next mayor, hopefully. She is amazing and a true climate champion. My hope is that she will get elected to do that job.

We’re being redistricted between now and the next election. There’s three potential outcomes for how that works out: I could end up in the new 6th congressional district, end up staying in the 5th or put back in the 3rd which is where Milawaukie was 10 years ago. Because we’re right on the edge of the district, it’s very volatile. If I am still in the 5th I will absolutely run against Kurt again. If I end up in the 3rd I might run for county commission.