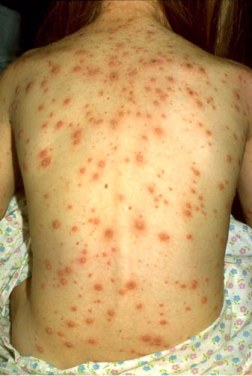 In 2000, the measles virus was declared eliminated in the United States because of the measles vaccine, a strong vaccination program that achieves high vaccine coverage in children and a strong public health system for detecting and responding to measles cases and outbreaks, according to the Centers for Disease Control and Prevention. But with the recent outbreaks, it’s important to be informed about why these outbreaks are occurring and what measles looks like.

Before the mumps, measles and rubella vaccine was created and dispersed throughout the U.S., 3 million to 4 million people contracted measles each year, with an estimated death toll of 400 to 500 people. An additional 48,000 were hospitalized and 1,000 suffered encephalitis, or swelling of the brain. Long term, measles can lead to subacute sclerosing panencephalitis (SSPE), which is a rare but fatal disease of the central nervous system that results when measles is acquired early in life, with the risk being higher when a child contracts measles under the age of two. SSPE generally develops seven to 10 years after a person has measles, even though the person seems to have fully recovered from the illness.

As of 2016, the overall national coverage for vaccines among children aged 19 to 35 months was 91.1 percent, with the MMR vaccine coverage in some states being less than 90 percent. With one dose of the MMR vaccine, it is 93 percent effective, while getting two doses increases your resistance to 97 percent. With both doses three out of 100 get measles, but according to the CDC it is much milder and less likely to spread.

The CDC attributes measles outbreaks, both recent and the ones in years past, to many people from the U.S. traveling to countries with more measles cases than usual, as well as small pockets of unvaccinated people in the U.S. itself. “The first case in Oregon had few public exposure sites. The three additional cases pose no risk to the public. These individuals were in close contact with the first case,” said Beth Byrne, community relations specialist for Clackamas County Public and Government Affairs. “Once they were identified, they stayed home and in regular contact with Multnomah County Communicable Disease Services. Strong public health policies can ensure that those at risk from close contact to known measles cases do not expose others.”

If you are concerned that you or someone you know may have been exposed to measles, it’s important to look for the most common symptoms. For the early stages, these include a fever, a runny nose, coughing, red eyes and a sore throat. After two to three days, small white spots, called Koplik spots, may appear in the mouth. The signature rash usually appears after three to five days, with a fever that could spike at 104 degrees.

“Measles is very rare in the United States due to access to safe and effective vaccination and successful vaccination policies,” said Byrne. “Thus, many younger medical providers have not seen measles in the past. Many viral illnesses can cause various full-body rashes. The rarity of measles typically can lead to not routinely considering measles in the differential diagnosis for a rash illness, and during an outbreak, multiple rashes can be thought to be measles. Roseola, chicken pox and allergies to medications can all cause rashes. Other symptoms such as timing of a fever and progression of the rash on the body can help differentiate measles from other causes for rash.”

According to the Oregon.gov website, colleges and universities require full-time students to be fully vaccinated unless they were born before Jan. 1, 1957. Community colleges have a different policy, with students participating in practicum experiences in allied health, education, early childhood education and intercollegiate sports being required to have the measles vaccine.

“When our region or community faces an outbreak of any sort, we communicate with students, faculty and staff with as much information as possible to keep everyone informed of what is happening and what can be done to prevent further contamination,” said Tara Sprehe, dean of academic foundations and connections at Clackamas Community College. “We have teams of staff ready to put any necessary protocols into place depending on the nature or severity of the outbreak.”