Although Moodle is supposed to be an online resource for students and staff, the bugs and glitches it gets at times can make it more of a hassle than help for many people at Clackamas Community College. With midterms underway, any students or staff members who use Moodle for their classes are relying on it to work. However, Moodle will be down most of the day on Sunday, so if students want to submit assignments or if teachers want to grade they will be unable to access it.

CCC student Ezra Molina is currently using Moodle for his math class. Molina said the outage happening on Sunday won’t necessarily affect him, but outages have in the past.

“A while ago I was in writing 122, I was writing an essay…I needed [to answer] a last second question. I could find the question on the Moodle page but it wasn’t working and I had to email my teacher,” Molina said. He also added that due to the inconvenience his essay ended up being a day late.

Instructors are impacted when Moodle goes down as well. It can make grading and communicating with students more of a challenge.

“Fortunately for me, my classes will be minimally impacted as I have prepared my students by communicating this down-time and my curriculum is not heavily dependent on Moodle access,” said science instructor Jennifer Bown in an email. “I think the timing of a Moodle outage right in the midst of midterm week is least desirable and many other classes will be much more impacted.”

These glitches and outages can be frustrating, but according to Jil Freeman, the Distance Learning Department Chair, there is nothing they can do when Moodle goes down.

Freeman said that her department would never intentionally schedule the website to go down during a time when students need it. She said that any Moodle outages they have had control over have never happened when students are in class. Freeman also said that they have tried reaching out to Moodle Rooms to request better timing.

“We’ve had conversations with Moodle Rooms about how we need them to time things and be different about it and we’ve advocated really strongly for that, but because we aren’t their only client we don’t have a lot of pull.” Freeman said.

Freeman suggested that if students are ever in a position where they can’t login to Moodle they can use the “backdoor,” which is online.clackamas.edu and see if they can login that way.

“I think the other thing is to be in communication with your faculty about due dates and making sure that they have understanding.” Freeman mentioned.

Another thing students can do if they are experiencing problems with Moodle is talking to someone at the Student Moodle Help Desk in the Dye Learning Center. Also available are computer lab attendants trained in Moodle to help answer any questions a student may have. 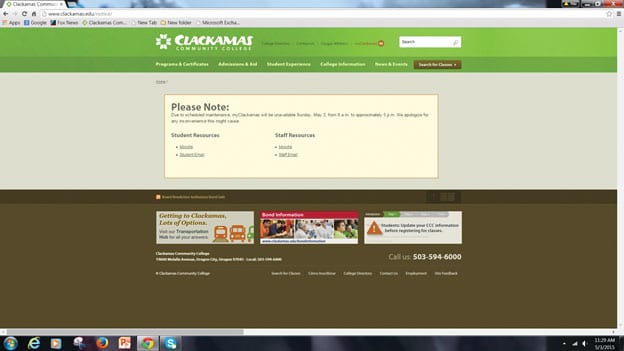 During Moodle’s maintenance, links were in place to direct students and staff to available resources.