Board of Education member Dave Hunt speaks at the ITC opening to staff, students and community on Oct 5.

Q: Can you tell me a little about the new building?

A: Well, the ITC is the Industrial Technology Center. This building will house our two machining programs. So, it’ll house what’s called manufacturing technology, which is a machine tool program, so it’s training people to be machinists. It’ll also house what we call computer aided manufacturing and computer aided manufacturing, also a machining degree. It also contains a number of CAD classes, industrial electronics and automation. So, it’s more for the person who is interested in the automation, high production side of manufacturing, so they’ll learn about robotics for example. So those are two different degrees. It also is the renewable energy program and the industrial maintenance technology, which is so closely related to that.

Q: What has the building offered that was not previously available?

A: Well, everything is still available. Programmatically, nothings really changed. What has changed is we’ve gone from just a really unsuitable environment, a very crowded, old, unsuitable environment, that was scabbed together out of that wing of Barlow Hall that was built 40 some years ago as a diesel lab. Over the years it’s been scabbed together to be a machine shop, a welding shop, the print shop used to be over there. The second story wasn’t even over there. It was put in as an addition. It was never suitable as a machine shop. It was crowded, old, dirty, so we went from about 13,000 square-feet in Barlow Hall to about 43,000 square-feet. It’s significant.

We were sharing three different buildings on two different campuses. Now they are all here in one spot. That really makes life easier on students and instructors. That also helped us consolidate the Industrial Maintenance Program which is kind of a new, burgeoning program, as they share about 70 percent of the same classes and the tools and the labs.

The bond also allowed us to upgrade our old equipment. We got rid of every single piece of our computer-controlled equipment. The oldest pieces were 28 years old. The newest piece of CNC equipment we had was 11 years old. Everything else was kind of in between there: 15, 20 years old and it was getting outdated fast. The new machines are much more capable. When you’re trying to attract students to a program and you’re telling them how high tech it is and they walk in and they see this computer controlled machine that looks like it’s got vacuum tubes in it, it’s a pretty hard sell. 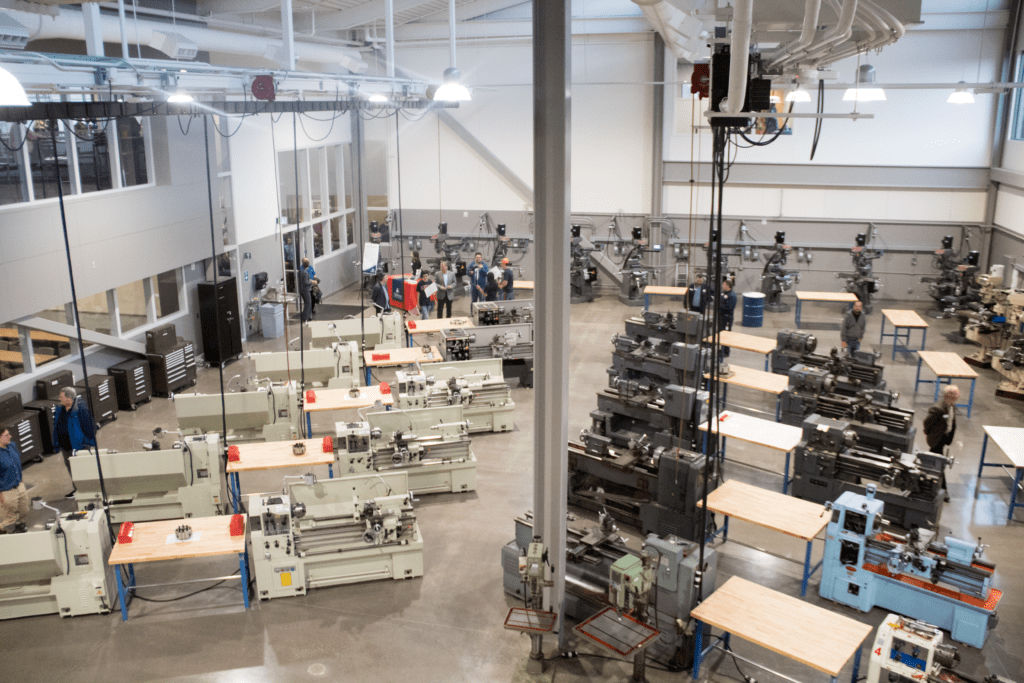 The largest room in the ITC building houses much of the equipment used in the manufacturing programs. The acquisition of the machines was funded largely by the same bond measure that allowed the building to be built.

Q: What are the benefits of a manufacturing degree?

A: A student can leave in a very short period of time, they can come in here and certainly in one or two terms they can get enough skills to get an entry level job, a $14 or $15 an hour job. If they want to spend two years here and actually learn to be a machinist, now you’re looking at beginning wages closer to $20 an hour. With a few years’ experience you can start pushing out over $30 an hour. Now you’re talking about real money, the kind of money you can raise a family on. You can’t do that on $15 an hour.

You don’t see too many in machining. There are still some companies that still have them, like Boeing has a big one, and Leatherman tool group has a dye maintenance apprenticeship. But those are more rare. I guess the problem I have with apprenticeships is that you have to have the job before you can get into the training. It doesn’t allow you to kind of bootstrap yourself. Say hey I’m going to learn this and then I’m going to go get a job. Apprenticeships have their place, but they aren’t as popular as they were a generation ago.

Q: Between going into school and taking the entry-level classes and working your way up or taking an apprenticeship, what would you suggest for somebody who is just starting out?

A: It just depends on your life circumstances. Ideally you would know what you’re going to do when you’re getting out of high school. I knew what I was going to do before I got out of high school. I knew our family didn’t have money to send me to college. I knew I was going to have to work. I started three years ahead of time preparing myself. I love woodworking and I love metalworking and I really started falling in love with the metal working side and so I prepared myself to be able to get a job right out of high school. Ideally a young person would know that and be able to do it today. We see it less and less all the time.

So, if you’re a young person graduating from high school and you can take classes before you graduate high school or soon thereafter, every year you work after that you’re going to make more than somebody with just a high school diploma. That’s the ideal way to do it. I also tell students that your life will get more complicated. It is never going to get easier, it’s only going to get harder.