The Multicultural Center grand opening was held on Nov. 25 in the fireside lounge where the Associated Student Government offered a variety of snacks and drinks from different cultures to students in celebration of their new department. According to the multicultural ambassador Candice Stauffer, the Multicultural Center is a place where students can have a private place to pray, study and get to know other cultures. Johnney Russ, the ASG vice president, added that the center could also be used as a gathering area for people to gain cultural awareness.

“The Multicultural department is bringing up the idea of cultural competency here on campus,” Russ said. He also said that raising awareness about diversity and the different cultures that are in the area is one of the main goals that ASG is working toward.

Stephanie Gomez, a Multicultural Department officer, talked about some of the events coming up that students can get involved in. “We will be having a book exchange where they [students] can bring a book to exchange about a different culture,” she said.

A group photo is also being organized to show the different cultures at Clackamas Community College. Gomez said the ASG hopes to have a lot of people come to show diversity on campus. Dates and times are still to be determined for these events.

Stauffer, Russ and Gomez all would like students to know that the Multicultural Center is available to them. It will be open during all campus hours and it works similar to the Cougar Cave where if it is closed, students can contact ASG to open it. 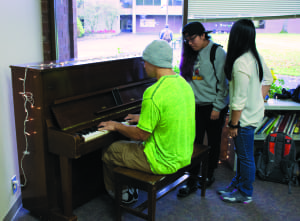