Campus safety officers will lose police powers because the sheriff decided to drop out of college.

Clackamas Community College currently has an agreement with the Clackamas County Sheriff’s Office, which allows CCC officers to have full police powers on campus, such as the power to make arrests and write traffic citations.

In order for the college to have police officers, we need the agreement with the Sheriff’s Office, because we’re not legally allowed to create our own police department or hire police officers. Because we are at the will of the sheriff, if the sheriff decides not to renew the agreement, our campus safety officers will no longer have full police powers regardless if it’s a mutual decision.

An Intergovernmental Agreement (IGA) was first drafted between the college and former Sheriff Bill Brooks in 1992 and later modified by current Sheriff Craig Roberts in 2005. The agreement states that “Special Commissions are required to give Security Officers the authority to enforce the laws of Clackamas County and the state of Oregon on CCC property.”

Sergeant Nathan Thompson, CCSO spokesman, said, “What our association is, is that there’s been an IGA between us and the community college that says the sheriff will make these people special deputies, so essentially the sheriff is giving the security officers there, he is deputizing them and allowing them to have arrest powers.”

The Clackamas County Sheriff’s Office has decided not to renew the agreement with the college. Therefore, our campus safety officers will lose their special deputy privileges at the end of this school year on June 30.

According to Jim Huckestein, Vice President of College Services, since Roberts took the position 10 years ago, he has looked at all of the commissioned officers the Sheriff’s Office had and made a decision to not renew them, to the extent of looking at some agreements before they even expired. The college just happens to be the last agreement on the list to decommission.

Although the end of the agreement takes away our officers’ police powers, it doesn’t necessarily take away their ability to be armed. Huckestein said, “The two options that we have in terms of retaining them [campus safety officers] is to either have unarmed officers or armed officers and either of those choices require different training, different oversight, different liability and those are the things that we are looking at now to determine which way to go.”

The question about arming our campus safety officers isn’t the only one surrounding campus safety. The previous director of campus safety, Bobby Smith, recently resigned after less than a year holding the position. The director before him, Suzy Isham, left after only 20 months. In the lifetime of the position, three directors have held the position and none have stayed longer than two years. It’s clear that the college has had a hard time maintaining a campus safety director.

Isham said, “I think the reason why there is some difficulty maintaining the folks in that position is because a lot of the people that may come on board don’t understand the flavor of the department of campus safety that they want. A lot of the folks that may come on board may want to develop their own police department, which is not in that culture. I think that’s why it took so long to find somebody after I left, as well, because you have to have the right fit and sometimes you don’t know it’s not the right fit for a couple of months or down the road.”

When asked what exactly the college is looking for in a director of campus safety, Huckestein said, “Their first priority isn’t to be using their police powers to arrest people for speeding or whatever on campus. Their primarily responsibility is to make sure that they interact with students and make sure that they feel safe.”

Enrique Farrera, classified association president, said, “For the campus culture, yes it’s true, you don’t want a patrol officer or a state trooper on campus, but the police officers that we have are part of the college culture. They have been here for many years and they understand how to work and interact. They have adapted their mentality. Their policing experience has always been within the college community.”

There seem to be many questions and few answers with regards to campus safety. However, Huckestein said he plans to keep students and faculty informed. “There’re a lot of different ways we are going to be communicating. Part of what we are looking at is how we do drills and training. We want to use standardized protocols. We are looking into doing standard protocols that are already being used in the K12 district. So if we determine that that’s the protocol that we use for lock down, lock out, evacuate and shelter in place, then we will do trainings across the entire campus to train staff and train students.”

Lori Hall, CCC spokeswoman, listed additional methods of communication by saying, “We’ll use social media. We can use the student portal, we can have videos and we can have demonstrations in the student center, so there’re lots of avenues we can use.” 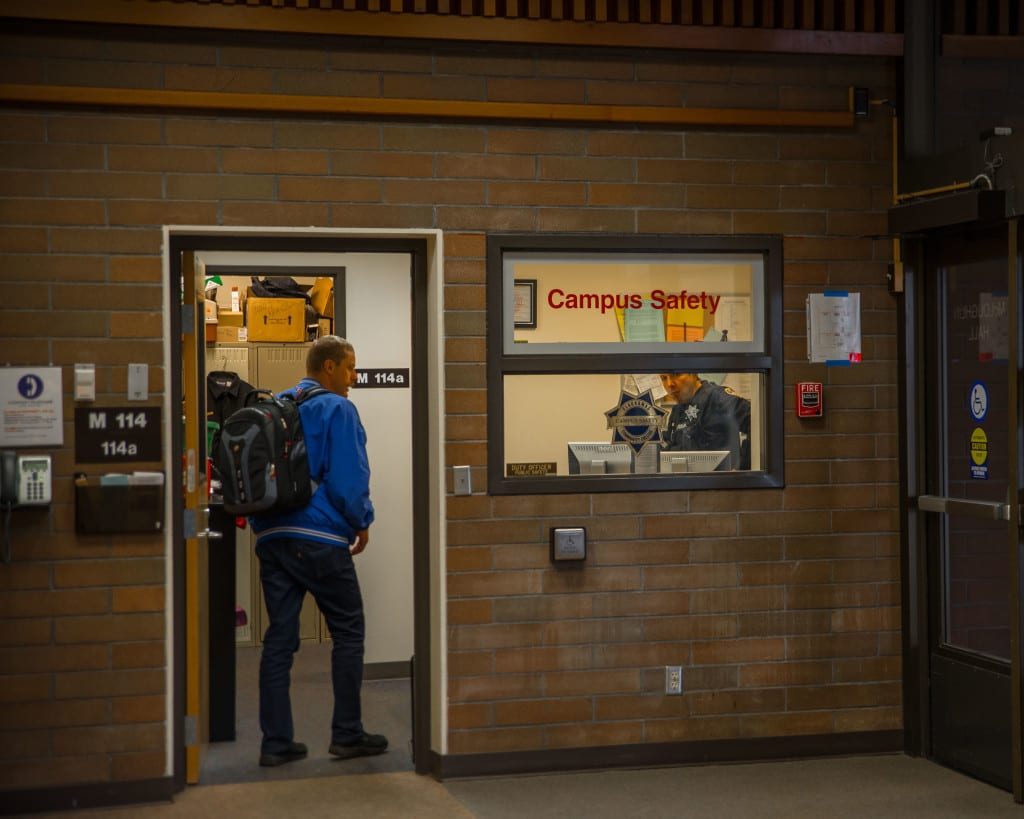