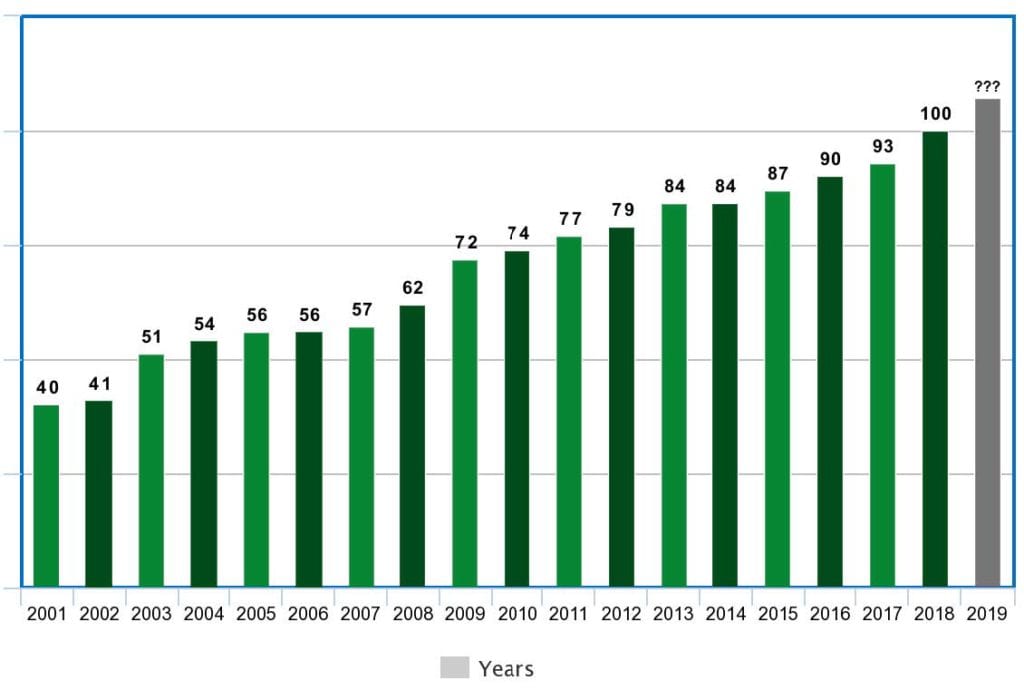 As the winter term at Clackamas Community College comes to an end, discussions regarding a possible increase in tuition that will impact students attending the college in the summer of 2019 continue. The college has proposed a $7 increase in tuition costs, bringing the total per credit cost up from $100 to $107.

This continues a trend that began over two decades ago, with tuition continuing to skyrocket, now leading to the cost of an average, four-credit class equaling $428 before additional fees. Many students may wonder what is causing this increase. The answer may not be a welcomed one.

According to information provided at a College Council meeting in October of last year, one of the largest contributing factors is the Oregon Public Employees Retirement System, or PERS, which provides retirement and disability benefits to most public employees in the state of Oregon, including much of the staff at CCC and other colleges and universities.

PERS has been a topic of much debate in recent years, with many criticizing Governor Kate Brown’s handling of the topic throughout last year’s gubernatorial election and beyond. According to reporting by “The Oregonian,” PERS payouts will nearly double over the next 20 years.

Attention on public employees’ benefits have come under the microscope, as employees who’ve retired from OHSU and University of Oregon are earning six-digits a year from the state retirement system.

For example, the top PERS earner, former OHSU president Joseph E. Robertson, retired in 2017 after 40 years of service; his retirement benefit is $913,000 every year, according to the searchable database of PERS earners.

While CCC employees don’t make as much money as those high-profile earners, some are leaving the college making six figures in retirement. Former CCC president Joanne Truesdell, who retired in 2017, is earning $145,000 a year, or $12,000 a month.

According to Greg Chaimov, a member of CCC’s board of education, PERS benefits cost the college about 25 to 30 percent on top of an employee’s salary throughout their career. The amount paid out by the college is also increasing much faster than other benefits due to a variety of issues dating back nearly 40 years.

“In the very early 1980s,” Chaimov said, “there was an economic downturn. Public employees hadn’t had raises in a while. The legislature didn’t have the funds then to provide wages, so the legislature said, okay, we will provide much better retirement benefits then we have right now, instead of giving you salary. So, in essence, they kicked the can down the road.”

According to Chaimov, the 90s saw a high profit on PERS investments. Though the college and other public institutions were required to place 8 percent of what was made every year into the employee’s accounts, due to the high profit, they placed extra, equaling the extra profit. During this time, PERS was making well into the double digits.

“So, the relatively generous retirement benefits for people who were employed in the mid 90s went way up,” Chaimov said. “Then we hit a period of time in which PERS was earning substantially less than the 8 percent they were supposed to increase everybody’s accounts. Well, if they aren’t making the 8 percent, and they weren’t putting money away while they were making more than the 8 percent, then the money has to come from someplace, and that’s the employees.”

Chaimov also said that this trend has never stopped. The college continues to make up the difference, placing an additional financial burden in addition to the other monetary costs placed upon the college.

According to Chaimov, a number of options are being discussed to alleviate this cost.

“The one that I’ve heard most talked about, which is most controversial,” Chaimov said, “is taking money from the state accident insurance fund, the pot of money that is used to pay for workers’ benefits when they are injured. What the state would propose to do is if a local government, and I would hope we would count as one of these, if they end up doing this, pays a certain amount into PERS, the state would match some part of that.”

Chaimov described funding for the school as a three-legged stool. The parts include property taxes, tuition and state funding, with the only other option being to cut staff.

“We are doing our best to try and get the state to give us more money, so we don’t have to cut staff and raise tuition,” Chaimov said, “but those are really are only options if the state doesn’t provide the level of funding necessary for us to do what we do.”

Dave Hunt, another member of the board of education, placed much of the blame for tuition increases on Oregon Ballot Measure 5.

Hunt mentioned two other measures, ballot measure 47 and 50 which continued to exasperate this issue.

“Up until then,” Hunt said, “community colleges had been getting roughly two-thirds of funding from the state. So, a combination of property taxes and income taxes. And only one-third of that had to be made up by tuition. Fast forward 30 years, and now if you look at the latest numbers, less than one-third of our funding comes from the state, and therefore the other two-thirds have to be made up by tuition.”

Increasing corporate taxes could be a way to make up the difference, said Hunt. With an increase in large businesses bringing business to Oregon, the state could look to them to supplement the education fund. Hunt did acknowledge that increasing corporate taxes could discourage companies from coming to the state in the first place, but also noted that Oregon currently has one of the lowest tax rates, and increasing it by even a small amount could make a large difference.

Like Chaimov, Hunt also suggested investment as a way of supplementing the college’s PERS budget.

Both board members concluded that regardless of the current cost, it is a fixed issue. Though benefits can be lowered for current employees, those who have already retired must receive the benefits they were promised, making it difficult to reduce the cost PERS places on the school today.

“PERS is just one factor contributing to tuition increases,” said Alissa Mahar, the vice president of College Services at CCC in an email. “It is one of the largest expense increases in the college’s expense budget, but also enrollment and state funding play a part in tuition rates. Because all community colleges in Oregon have the same funding model, it should be noted that all community colleges are facing continued decline of state funding support.”

Like Hunt, Mahar noted property tax revenue as an issue, stating is has been flat, without a supplemental increase in funding, leading to less revenue available for the college to use. She also noted a slight decline in enrollment at CCC, which has led to an additional decrease in available funds.

“Finally,” Mahar said, “state funding has not kept pace with inflation and the costs of current service levels community colleges need. Without increased funding from the state legislature and property taxes, community colleges must either make cuts, raise tuition or a combination of both.”

Mahar did note that when the college observed the escalation in PERS payout projections several years ago, a reserve fund was set up to preserve a surplus in the general fund.

“At this point,” Mahar said, “the fund has reached $3 million to help offset the future impacts of PERS increases. However, this fund will not last long without increased funding from the state.”

Mahar, unfortunately, did not grant much hope to those who hope for tuition costs to stabilize.

“In order to keep pace with inflation and increased costs associated with providing the services students need,” Mahar said, “along with uncertain funding from the state, it is expected tuition will continue to rise. However, the college is always looking for ways to help students save money, such as the free shuttle service, reduced transit passes, financial aid resources, scholarships and the Oregon Promise.”

Mahar also stated that it is important to remember that PERS impact is state-wide, resulting from past management and policies.

“These past actions are impacting today’s workforce and employers from a cost containment standpoint,” Mahar said. “Students are seeing the impacts of past PERS decisions now, because increased revenues are needed to cover increased expenditures.”

Tim Cook, CCC’s president, reiterated some of the same concerns as the other members of the college leadership.

“In my mind, PERS is a state issue that’s been around for, gosh, I’ve been hearing about PERS since the early 2000s and what an issue that was going to be,” Cook said.

Though a state issue, Cook said that the issue impacts the college, specifically college tuition.

Both Hunt and Chaimov suggested student involvement as one of the best ways to elicit a response from Oregon legislation, specifically regarding the lack of funding for community colleges from the state. Each suggested students try to contact their legislators, perhaps even make the trip to Salem to speak with them directly if it is within their means.

The college board of education will discuss the proposed tuition increase at its meeting on March 13.