Planning for bond money use begins

On Nov. 5 2014, Clackamas county voted yes for a $90 million bond that will  finance updates many are left wondering: what exactly is going to be done with that large sum of money?

The Clackamas Print sat down with Dean of Campus Services, Bob Cochran, to get more information on the school’s next steps.

The Clackamas Print: What are the biggest projects that fall under the bond and what gets priority?

Bob Cochran: The biggest projects are the Harmony Projects. We’re going to build another wing of classrooms and office spaces.  The number of
 floors is not in question right now, but we’re looking to see how many we can build with the money we have and any further money that comes in. So
that probably will be one of the  first projects we will undertake in this construction.

On this [Oregon City] campus, we’re assuming that the Industrial Technical Center will be one of our  first buildings, which will be combined with the automotive remodeling. We’re talking about taking the manufacturing out of the auto area, so manufacturing gets both sides.
Sometime thereafter it will probably be the DeJardin phase, with the five science labs and the classrooms. And then the community center building will probably be the last one. And again we haven’t really set up a start time and end time of where we’re going to go.

TCP: What is ‘debt service’?
Cochran: When we built Harmony campus, the college borrowed that money, like a mortgage almost. So right now we have to make our mortgage
payments out of our general fund, which means the money that we used to operate the college, we’re going to refinance that money using bond money. So the money that we raised in the bond is going to pay the mortgage.  Then that’ll free up money in the checking account or general fund.
TCP: When you guys work with architects, do you contract out to a private  firm? Or is there somebody that you go to? 

Cochran: What we’re required to do is make ‘Quality Based Selections’ or QBS, and what we’ll do is we’ll advertise in the paper saying, ‘We’re going to build this building. Anyone who’s interested send us your qualifcations’. We’ll probably get 10 or 15 or 20  firms sending us packets.  They tell us
who they are, who their team members are, similar projects they’ve had. And then from that, we’ll have a team review these qualifcations, and we’ll determine
how many we want, and pick from the top three. And then from the top three, we’ll say ‘okay, you guys are qualifed to do this work, we want to get proposals from you now’. So they will give us actual proposals for the work, and we’ll evaluate those proposals and select the top firm to work with. The state rules requires us to go through that process.

TCP: What will happen when the community center is being rebuilt?

TCP: What about the classrooms? I know a lot of the chemistry classrooms will be updated, and when does that start?

Cochran: Well that’s DeJardin phase two. It’s kind of more of a simple project because we know where it’s going to go, it’s going to be on one side or the other on DeJardin, and a relatively simple design. That one is kind of a slam dunk, all things considered. 

TCP: Besides buildings, will there be any bond money for scholarships?

Cochran: You can’t use bond money for scholarships, it has to be for capital. It can only be bricks and mortar and classrooms, all those things that
you can touch. 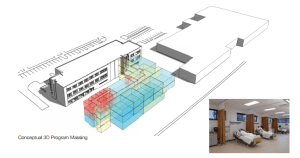