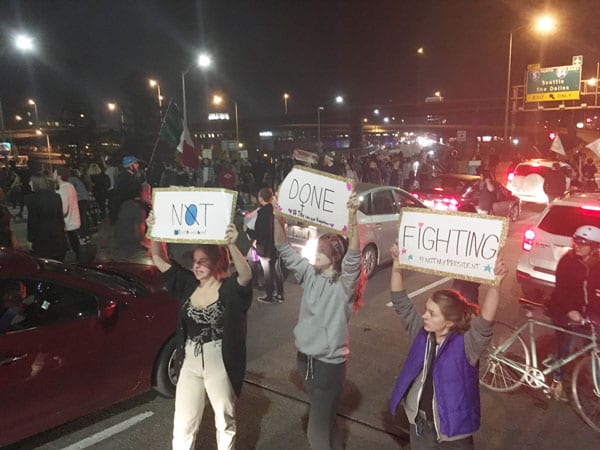 On Wed. Nov. 9, Portland protesters blocked the freeway in response to the presidential election. Protests took place for five nights in the city of Portland.

President-elect Donald J. Trump stunned the world when he won the presidential election. Hillary Clinton was predicted to win according to many polls. This, however, was not the case.
National reaction to the win has not settled well with many of the supporters who voted for Clinton, voted for a third party or didn’t vote at all.
Grievances derive from who was elected and the political system. From Nov. 8 to Nov. 12, protesters in Portland, held signs up with messages ranging from “Back off my uterus Pence” to “F*** Trump.”
Portland was on national news for the riots. Criminal activity associated with the protest included smashing cars, spray painting walls (about which I was confronted by a few protestors for daring to record) and shattering store windows.
On the second night of the protest, Nov. 9, I was following the Leviathan group from East Portland to West Portland and back. The majority of animosity was directed, not toward the other issues, but toward Trump. While they bellowed their views, among other things, they said, “No Trump! No KKK! No fascist U.S.A.!”
This type of chanting lasted from as early as 5 p.m. to 1 a.m. During this second march, people dawning masks to cover their face spray painted the sides of buildings and the sidewalk, all right next to people who would take in the toxic fumes. Children were included in the marches, even infants, strapped on their mothers’ backs.
Gregory McKelvey, the spokesman for “Don’t Shoot Portland” went on Twitter to respond about the violence and vandalism that took place on Nov. 10.
“The protest that became violent was not our protests. Get your facts straight media,” said McKelvey.
The fourth night of protest located between City Hall and the Wells Fargo Center was intensified by the presence of the police, who simply asked protesters to move north of City Hall, wishing to help them. But the protesters faced off in more chanting at the police.
Portland Police had arrived because the people had no permit, as required by law. Ironically enough, McKelvey, a law student, never addressed this. A law student leads a protest that has no permit. What does that say?
Amber Hutchsons, a protester, was dressed in full blue unicorn pajamas.
“It feels like people who are [LGBT], and people who have mental disabilities, and people who are women…. Because I’m all those things,” said Hutchsons. “Every time I go out I feel like I have a target on my head and this is the only way I can get my own power back.”
“We need to wake up,” said Kathleen Hollingsworth, director of vocal music at Clackamas. “I’m not even going to buy Christmas presents.”
Hollingsworth said she would put her money towards women shelters and to people who need the help, that this election has been a wakeup call. A problem for the people to solve.
She later added another comment.
“Welcome to the great awakening!” Hollingsworth said in an email. “It’s time to walk the talk of love, justice and integrity at a much higher level. And it’s time to fight harder for the health of the planet. Lord knows the ecosystem is on the chopping block.”
This has been a vocal movement even among protesters, and on social media. People have argued that the electoral college should be abolished. But at the same time, money shouldn’t be the driving force behind the election process. I couldn’t agree more with the latter statement.
“If something doesn’t change now, in the next year, then the people are going to rise against the government to reform it,” said Adam Joslin at the protest, after putting out a fire in the trash can. “That’s our right.”
“If we don’t kill them first, we’re all dead,” said Joslin. “It’s not a matter of peace, it’s a matter of peace—I’m sorry the utopia of peace. There can be no peace without war, cause and effect. Many times in nature it balances it out. They [screw] things up because they got greedy.”
This last one was particularly disturbing, on the Alex Jones level. Regardless of your political views, Trump has won in the Electoral College. For people like Hollingsworth, I can understand where she might come from, but I don’t fully agree. However, in the wake of the election, she’s now planning to spend her money to support those in need. And I think that is something we can all take from this: not protesting in a city that already agrees with you, a vast ocean of an echo chamber, but being active to make the change. Stopping traffic isn’t going to do that.