Protests against police brutality rage on 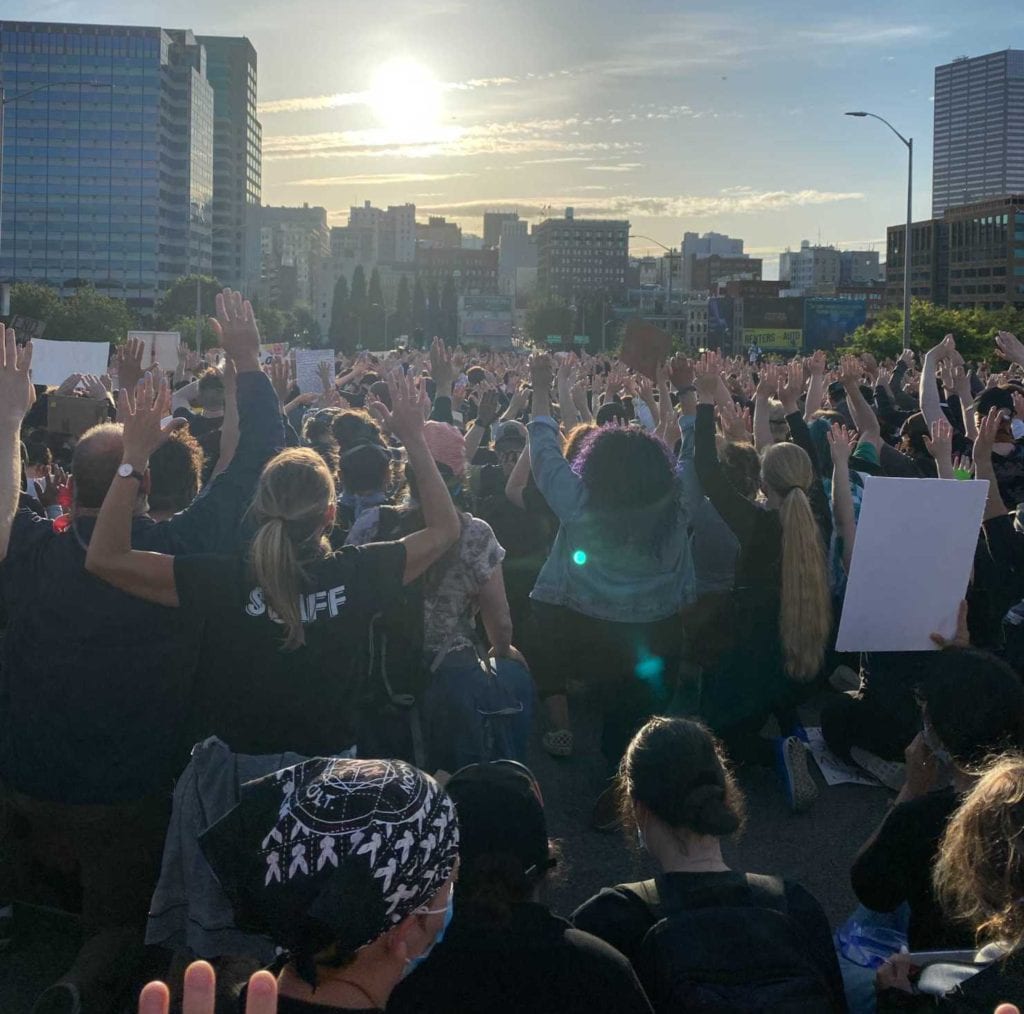 On May 25, 9:25 p.m. civilian George Floyd would be pronounced dead at Hennepin County Hospital in Minneapolis after having his neck knelt on for nearly nine minutes by a police officer in broad daylight. Floyd is just one of countless victims of police brutality; while many cases have been swept under the rug, the protests taking place around the world are proof that this was the last straw. Protests and riots began on May 26 in Minneapolis, Minnesota and few — if any — have tapered off. All 50 states are now seeing ongoing protests with no signs of slowing down — in fact, things have only picked up as other countries across the globe have joined in to call out systemic whitewashing, police brutality and racism in their own governments.

Thousands of protesters have been making their way across one of Portland’s many bridges and into various areas of downtown Portland for 14 consecutive days, with a large majority meeting at Irving Park and the downtown waterfront. Each day has seen the implementation of tear gas as well as the LRADs which is a high frequency acoustic weapon used for crowd control. Portland Mayor Ted Wheeler has urged police not to utilize this weapon as it could lead to lawsuits, though it is still being used each night to combat protesters. 20 arrests have been made since the protests began; despite the use of violence on the police’s part, most protesters can be heard exclaiming that this is a peaceful protest. I myself witnessed protesters who threw things at police or broke things being ejected by the majority of the crowd, as no one wishes to give police reason to use unlawful force against them.

A stage was set up on June 3 in the Tom McCall Waterfront Park where a variety of speakers were given a chance to share their thoughts on the current events of the world. Reverend E.D. Mondaine, leader of the NAACP Portland chapter, spoke about the history of racism and the disappointment he feels in seeing it alive and well today. Mondaine has dedicated his life to supporting communities and has an extensive background in social work and corporate management as well as music.

“We’ve waited for 400 years for such a time as this right now. Brothers that have gone on long before us. Medgar, Martin, Malcolm, Mandela and so many others gave their lives for this moment,” said Mondaine. “After the Civil Rights Act was passed over 50 years ago we were convinced that we were on our way to inclusion and equality. However, in 2016 the veil was lifted and we saw that America had roaches — roaches of racism exposed — disease-carrying critters contaminating anything good that was in their way. But, I see before me today exterminators.”

Mondaine maintains hope for a brighter future and believes it possible to abolish racism and the systems that perpetuate racism and hate.

“I know beyond any shadow of doubt you’re going to get the job done. I want you to rise up my brothers and exterminate the disease of racism that has choked the life out of our people for far too long,” Mondaine said. “Exterminate the systems that have continued to put their knee on the back of our necks, choking out the hope of bright tomorrow and better days. Equitable days where we all matter.”

Former president of Clackamas Community College’s Black Student Union Stephanie Harris has taken part in three protests since they began, each in a different county. Harris felt that they all brought a unique and powerful message to the table.

“One was in Milwaukee, one was in Clackamas and the other was in Portland. Each protest had different forms of expressing their point, yet they all remained peaceful.” Said Harris. “Portland did a lot of chants and there was a prominent feeling of undeniable gratitude and togetherness. Milwaukee highlighted public speakers and real-life experiences of the audience. Clackamas seemed to make a statement by walking from Clackamas high school to the Happy Valley city hall as their form of expression. As I previously stated they all remained peaceful, and to me, they were a period of togetherhood and allowed an open expression of my beliefs and emotions.”

Harris, along with countless others, feels that it is time to develop a system where police can not abuse their power. A system where they are held accountable and punishment is not impossible.

“The most important step to me would be to create a system that puts consequences on the officer.” Harris said. “For example, in over 30 states, officers are allowed to have sex with people in custody, even if it isn’t consensual. Our system is made up of leniency towards the cop even if they are in the wrong, this needs to change.”

Portland State University professor and civil rights activist Lisa Bates also spoke on June 3, her anger clear as day in her speech. Bates, like many others, called for the defunding of Portland police. She is the Associate Professor of Urban Studies and Planning and has been teaching at PSU since 2009.

“The Portland police budget has increased 28% over five years. In a time when [the novel] Coronavirus decimates this city’s budget — every essential service is being cut, their budget is still increasing by two percent,” Bates said. “There is a budget hearing next week. We need a change. When you don’t have a place to live — when you suffer the symptoms of poverty, cops go up with surveillance, with violence, displacement. We don’t need it. Becky and Karen are not just a meme. Every four minutes in the city of Portland someone calls 911 to call cops to an incident where there is no crime being committed.”

Portland police could be seen on June 3 fencing off the Justice Center before the sun went down, as it had become one of a few hot spots for protesters and riot police. Civilian Jessica Bates approached the group of police on the other side of the fence to ask why they were closing it off to the public. “Because you guys tried to burn it down three nights ago,” said Officer Dale.

Former Police Chief Jami Resch has openly condemned the utilization of tear gas and other chemical weapons when dealing with protesters, though she contradicted that statement earlier when speaking at an online press conference on June 1, defending the Portland Police Bureau’s use of tear gas.

“Outside of the Justice Center turned very dangerous. Some members of the crowd threw large fireworks at the officers which detonated near to them. Officers responded with gas to disperse the crowd which was effective in moving the crowd away from the Justice Center and dispersing the group into smaller groups,” said Resch. “We would like very much to move forward with the change that everyone wants but we are unable to do so when we are faced with violence and destruction in our city.”

Resch announced on June 7 that she will be stepping down as Police Chief and she will be replaced by Lieutenant Chuck Lovell. She has been serving the Portland Police Bureau for 20 years, though she has only been Police Chief for approximately five months. Resch is to remain a part of the PPB, though the position she will fill is unknown. In an interview with Oregon Public Broadcast she said that Lovell is a fine replacement and is coming at a good time. “He is the exact right person at the exact right moment,” Resch said.

The fences around the Justice Center have remained up since June 3 and it is unclear when they will be removed. The momentum of the protests has not decreased in the slightest and  the numbers are estimaDvted to increase over the next few weeks. Mayor Wheeler has announced financial and legislative changes in the near future, potentially indicating a budget cut for the PPB.

There are ways to help even if you are stuck at home and cannot attend a protest. The murderers of several individuals have not been charged and donations need to be made towards the proper organizations. Sign petitions, donate and make your voice heard. Change will not come about by staying silent. Below are links to petitions and organizations that need your help.

Donate to the family of Ahmaud Arbery

Donate to the family of Breonna Taylor

Petition for the National Act Against Police Brutality

Petition to ban the use of rubber bullets

Petition to defund the police

Donate to the Bail Project

Donate to the Act Blue Racism and Police Brutality Fund

These are only a few of the resources that need your support. Research further options and do your part!