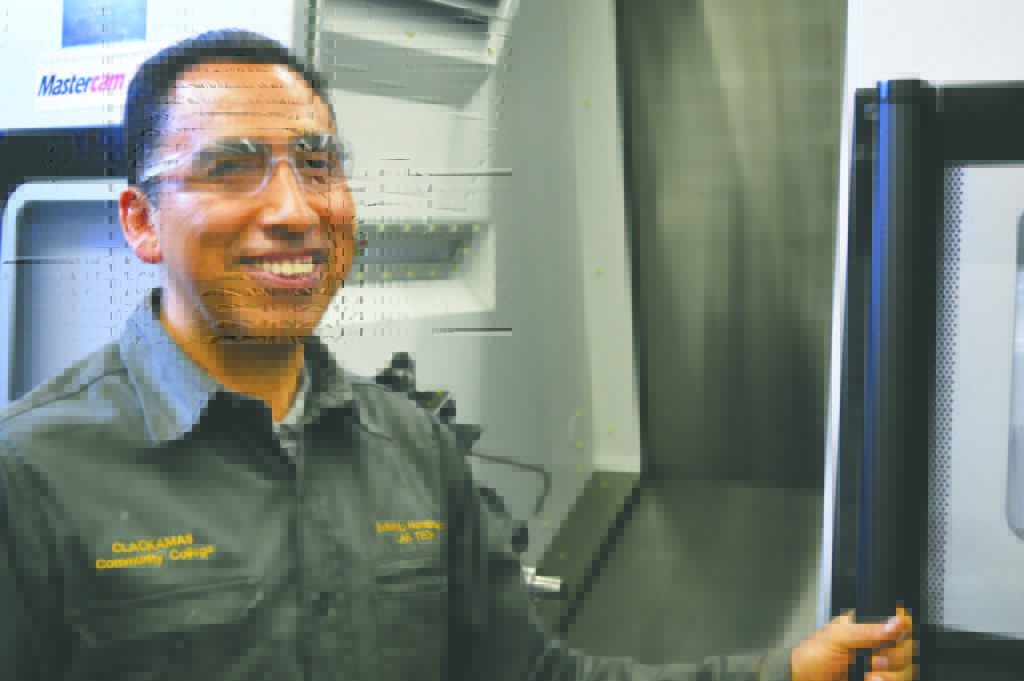 Eduardo Hernandez is a lab technician in the manufacturing department at Clackamas Community College.

Imagine being in a mall with hundreds of people, only one flight of stairs, one exit and an earthquake hits. On Sept. 19, Eduardo Hernandez witnessed first-hand the earthquake in Mexico. He is a lab technician at Clackamas Community College. He helps with welding and manufacturing, and he is in charge of making sure students have the materials they need.

Editors Note: This interview has been translated from Spanish.

The Clackamas Print: When did you go to Mexico?

Eduardo Hernandez: I arrived on September 7 and I came back September 20.

TCP: Where were you at the time of the earthquake?

EH: I had to go out with my sister to eat at the mall. We planned to meet at 2 in the afternoon. So, I decide to get there a little earlier so I can shop around and have a good time. But, as I enter the mall and I walk towards the escalators, I start to feel a movement. And I said, am I getting dizzy or what’s going on? When you start to look around, everything starts to creak, everything starts to move and the people start to run. It was at that time where I started to be cautious. It was an earthquake.

Then, I turn around and put my back against a concrete column that holds the structure, and I stay there. Once there, you start to observe all the people that are running, crying, screaming. That mall has the characteristic that it is next to the public transportation system that is in Mexico, which transports thousands of people in one day. So, when the train came with all the people, all the people started to run. It’s terrible, you don’t even know what to do.

I stayed put. Then, a woman comes next to me, she grabs me by the arm and wouldn’t let go. She holds me tight and starts praying, asking for God to forgive us for what we had done. She was extremely nervous, and she asked me, why don’t we go outside? I said, no because by the time we run, it’s better to stay here, let it be God’s will. Now, the only thing you have left to do is look up and wait until the pieces of material start to fall. You can’t do anything else and a lot of people stayed next to the column. Then, when you see that everything has calmed down, you go outside. The street was chaos. The entire public transportation system stopped and the people were running, coming and going, crying, fainting, ambulances and all in seconds. I don’t know how long it could have lasted honestly, what I do know is that it was of 7.1, but it’s something that impacts you. I think that everyone feels that life gives you a second chance.

Once outside, everyone was waiting to see what was going to happen. I stayed there for about two hours. Then, in that moment, the mall gets on fire but the good thing was that everyone was outside. The only dangerous part was that it could reach the gas tanks and explode. So, security comes and tells everyone to move further away from the building. I decide to go back home and I had my flight back the next day.

I have a friend in the Franklin library, which is sponsored by the American government, in the center of the City of Mexico. I called him and he said, come over. I arrived there and I waited for about two hours for everything to calm down. When I see the news, I noticed the magnitude of the tragedy of what had occurred. Buildings collapsed, people died, people stuck inside the buildings, it’s something strong.

TCP: How long do you feel the earthquake lasted?

EH: Right there you feel like it lasts an eternity. Although, in reality, I don’t know. It could have been seconds, but you feel like it just keeps going on and on. About an hour after everything had passed, you would be standing up and you could feel the movement in your feet.

It is my understanding that there were two, one right after the other. The first was trepidatory and the second was oscillatory. So, that’s what provoked the catastrophe.

TCP: Is there anything else you would like to add?

EH: When I came back, thanks to all of the teachers here and all my friends, they were interested in how I was and how my family was. A teacher tells me, it’s a good thing you got out of there safely. Here in Oregon we are waiting on one at 9.1, and he tells me, since you already survived two, if it happens, I’m going to stay with you that way I will survive the third one.