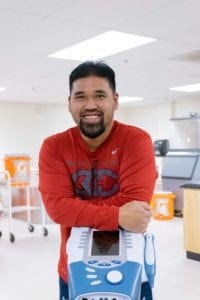 Maybe you know him from hanging out in his room in Randall, or maybe you’ve been a patient. Kevin Arizo is originally from Hawaii and has spent 12 years at CCC as an athletic trainer.

TCP: Where did you go to college?

TCP: Did you play sports in high school or college?

Arizo: Yeah, I played soccer. I was a soccer kid. I played in high school and then I played in college at Pacific.

TCP: What made you want to become a trainer?

Arizo: In high school I hurt my knee, and I did my rehab with my athletic trainer at the time. I just kind of liked what he was doing, working with people — helping people. So then, going to college, I was debating about doing athletic training or physical therapy and going through it, I still didn’t know after I graduated. And then, just working in the field, I like working with athletes.  They’re more motivated. I get to spend a lot more time with athletes than I do at physical therapy. Most physical therapy is you’re in for an hour and you’re out, that’s all you see them, versus like, Mr. Marty [Margolis III] here, I get to see him all day, all the time, so I get to know kids a lot more, and I get to hopefully affect their lives. Hopefully for the better.

TCP: What were you doing before coming to Clackamas?

Arizo: Living my life. I was at Lake Oswego High School and I was working with the Portland Timbers before I came here.

TCP: What did you do with the Timbers?

Arizo: Same thing. I was an assistant and I was working with them coming out of college; I was splitting a job at Lake Oswego High School and then this job came up.

TCP: What was your path to becoming an athletic trainer?

Arizo: So, I actually just have my bachelor’s in exercise science with a sports medicine emphasis. After I graduated, I went through the Timbers and Lake Oswego High School. The guy that I was working with at the Timbers was actually the athletic trainer here at the time and when he was leaving he told me to apply for the job, and I’ve just been here. It’s kind of one of those that there’s now everybody that goes through athletic training has to get their master’s. So there’s a master’s program at Pacific now, which they send students to me, which is awesome, but I wish that would’ve been there when I was there. Now, there’s so much more research and things to learn so they have to learn so much more. Good and bad, I guess.

TCP: What’s your most memorable moment from being a trainer?

Arizo: I don’t know if I have a “most memorable.”  I mean, championships are championships, like when your team wins it’s always fun. I would say it’s not so much of a moment, but I remember people, I’m gonna remember Marty — I’m gonna remember people that I really get to know, people that really spend time and work hard and, I actually affect their injury process and try to get them healthy. I think it’s more about that. There was the guy [Richard Jensen], the wrestler, that had the “30 for 30” made for him, and that’s always — ESPN being here is a big thing — but you know, working with athletes, everybody’s unique and spread out.