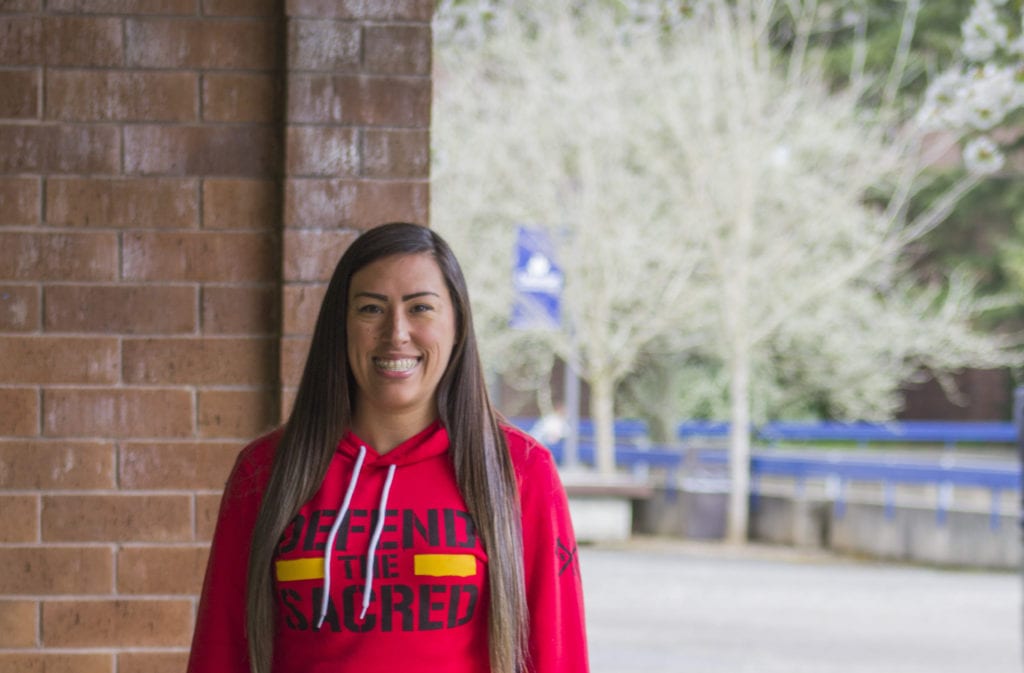 Vanessa Castle is a student at Clackamas Community College studying to be a lawyer. She left CCC during fall term to protest and stop the Dakota Access Pipeline in North Dakota and returned for spring term. Castle served as a water protector who endured harsh, cold winter nights and crowd-control chemicals like pepper spray but also a community where many across the country were brought together.

The Clackamas Print:What was the catalyst that made you decide to go to North Dakota?

Vanessa Castle: I left for North Dakota after seeing the October 27 north camp take over unravel online. I specifically saw one of my friends on the frontlines, who I knew went out there from the Pacific Northwest, get thrown down by the police and, you know, hurt and then seeing the police turn around and release a statement saying that he attacked them when I watched it on live feed unfold.

TCP: How different was it from seeing it firsthand and watching through a livestream?

VC: Night and day. When you watch things unfold online, you feel compassion and you feel the sympathy for those people, but it’s not like experiencing it in real life. Camp was a very beautiful and spiritual place, all of the time and it wasn’t until we went to the frontlines that we made the news, because we were getting hurt and we were getting shot at. But the rest of that, the rest of camp, the beautiful ceremonies that were happening every day, the beautiful water ceremony every morning at morning. We would sing and do round dances every night. Then feeding thousands of people. There were multiple kitchens that would feed thousands of people for free. Everybody cutting firewood and pitching in to survive. Those are the things you didn’t see on the news and online. So, it was a very spiritual thing that you could never teach anywhere. So, I’m very thankful that I decided to leave and go there, even though, I gave up a lot by leaving.

TCP: The news outlets showed what looked like police firing water at protestors at night. Were you there at that time?

VC: I was, that was November 20. That was water cannon day and I’m actually writing about that right now. Writing, for me, is a form of therapy. Getting it out and telling people. Not being specific, but getting it out. But yeah, I was there and that’s the night that haunts me the most.

TCP: Has there been any form of repercussion for the Morton County Police?

VC: Not as far as I know. The way that unraveled, the Morton County Sheriff’s Department had told us that they were going to open up that bridge for weeks if not months, and that it needed to go through some structural testing with the department of transportation to make sure the bridge was structurally sound. But they stalled and stalled and stalled and they wouldn’t open it. And there two burned vehicles on the bridge and a few water protectors took it into their own hands to remove those burned vehicles from the bridge. You know, trying to speed up the process. OK, we’ll remove the debris, you get the testers in here to test this and let’s get this bridge open. Because it’s limiting out access to emergency services. When we had an emergency in camp, it would take an extra 40 minutes for an ambulance to get there if Standing Rock wouldn’t send theirs, because it was out of their jurisdiction.

TCP: What made you come back?

VC: We thought that things would change. There was a huge division in camp when the Standing Rock Sioux Tribe decided to pull their support out after December 5 when the easement was denied by the Obama administration. I originally moved down here to help with my sister and child, and now that I’m back, I can help. We were forcefully removed by law February 22-23.

TCP: Have there been any positive changes since Standing Rock?

Castle: Yes, there have been positive movements. The Divestment push. Pushing people to divest form financial corporations that fun big oil, such as Wells Fargo, Chase, Bank, those big financial institutions that continue to fund big oil throughout the United States. And that’s something we’ve worked against in places like Portland and all over the North West, but also internationally.

TCP: Is there anything you’d like to add for the readers?

Castle: Yea, if you want to get involved, locally, to contact me. We’re still doing a lot of local organizing for standing up, not only for Native American rights, but human rights and environmental rights here In the Northwest, and Oregon. And I can point them in the right direction if they want to get involved or helping with our bank divestment movement. Because we have multiple pipelines coming to the west coast. The Kinder Morgan Transmountain Pipeline is going to be going into the port of Vancouver, which unfortunately, will be affecting my home territory in Port Angeles Washington. That’s my front yard. That’s our fishing grounds, that water. And with the [Pacific Connector Pipeline], there’s a huge movement to stop that. So, if anyone wants to come up and here what’s going on, I’m doing lots of speaking events around, when I get asked to talk about what happened over there and how to move forward. So just get ahold of me if you want me to speak.

TCP: How can they get in contact with you?

Castle: Either through Facebook or email. My email is livetodaylikeyourlast@gmail.com. It’s a public email that people can contact me on if they want me to speak.