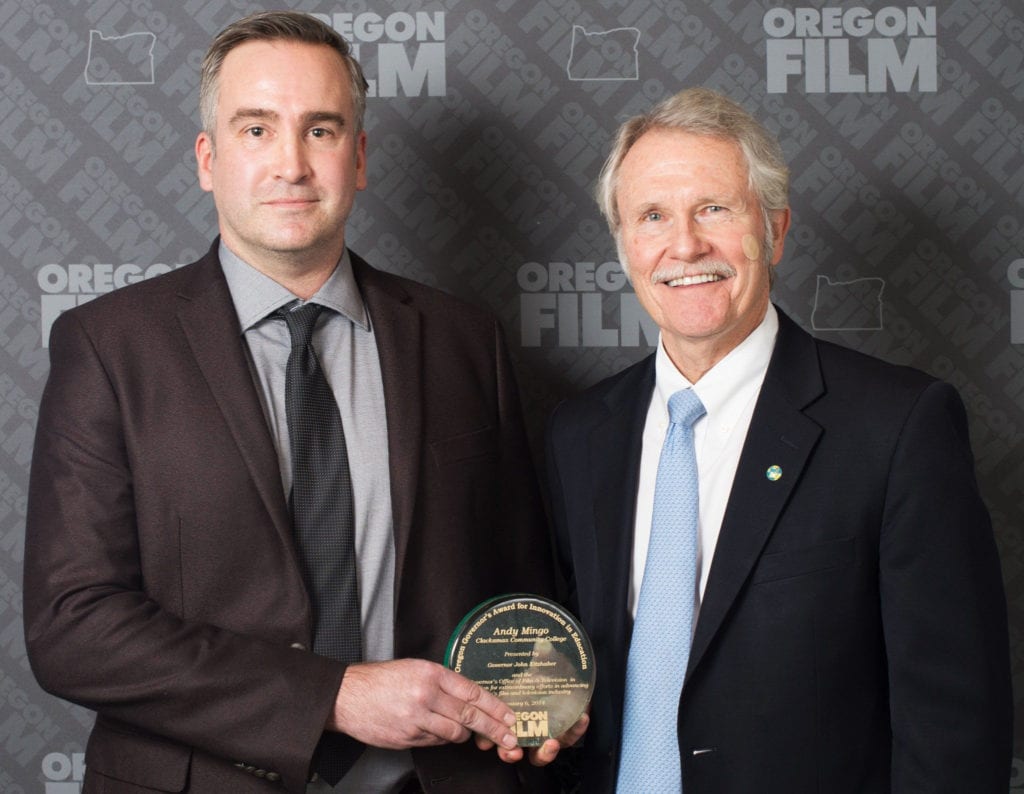 By Kristen Wohlers and Elizabeth Kessel

Clackamas Community College last year investigated one of its most high-profile instructors for falsifying student records, according to documents provided to The Clackamas Print. Andy Mingo, who won the prestigious 2015 Governor’s Award for Innovation, resigned in the wake of the investigation into the offense, which could have been grounds for termination.

The sudden resignation in the middle of winter term on Feb. 5, 2016 ended his 12-year career at the college where he earned more than $78,000 per year.

The documents disclose that Mingo, 45, was accused of falsifying grade records, likely those of his wife, Lidia Yuknavitch, 53, a famous Portland author and Mt. Hood Community College instructor, who earned her PhD in English from the University of Oregon in 1998.

While Mingo’s college teaching career at Clackamas was ending, Yuknavitch’s literary career was rising. Last spring, she won the Oregon Book Award. Her latest novel, “The Book of Joan,” earned a glowing review last month on the cover of The New York Times Book Review, which called her work “brilliant” and “incendiary.”

Mingo, who was a full-time faculty member and instructor of Digital Media Communications at the college, cited “personal matters” as the reason for his resignation in an email to Art Department Chair Nora Brodnicki. According to his attorney, Mingo denies the allegations, adding that it wasn’t worth it to him to fight the accusations when he had other opportunities in filmmaking to pursue.

The records obtained by The Print through Oregon Public Records Law reveal the outlines of the investigation. Dean of Arts and Sciences Sue Goff conducted the initial review, documents show. It’s unclear how far back in Mingo’s teaching career the college researched in its review. 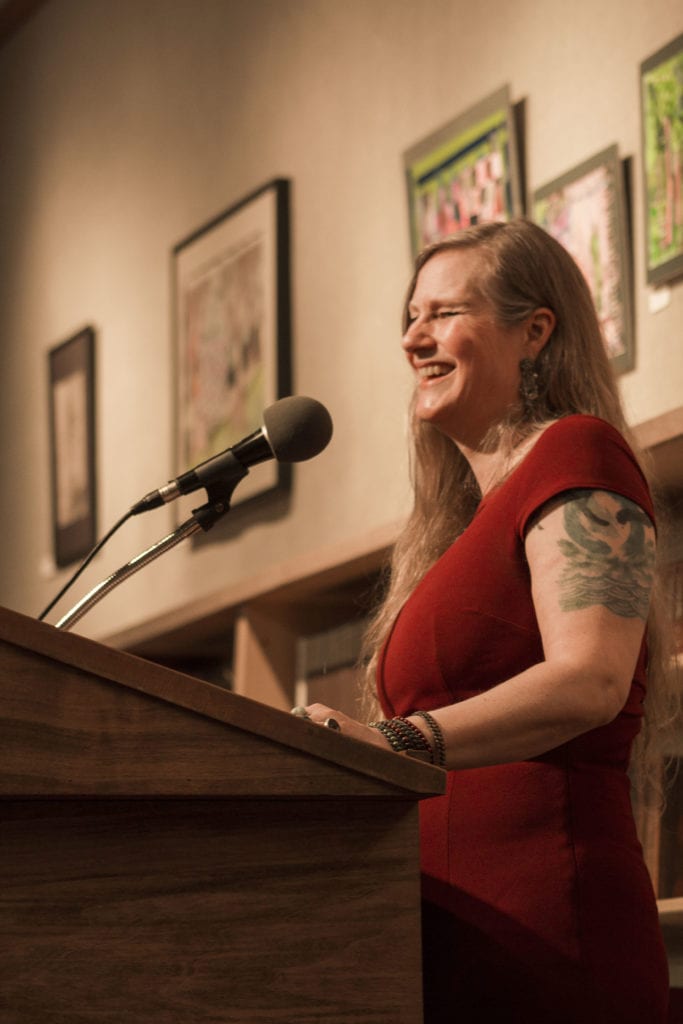 Mingo’s wife, Lidia Yuknavitch, speaks to a standing-room only crowd at Powell’s on April 18 to promote her new book.

“It is my opinion that charges of falsifying grade records and course related or required documents should be brought against you,” Goff said in an email to Mingo on Jan. 5, 2016 under the subject line “investigation decision.” Goff declined to comment to The Print.

In her email, Goff referred to a provision of the Full-Time Faculty Agreement that governs instructors at the college. That provision states that a complaint against a faculty member, if true, could lead to termination for unprofessional conduct.

Neither Mingo nor Yuknavitch responded directly to multiple requests for comment in April and May. Instead, all comments came from their attorney, Lisanne Butterfield, who initially called and sent emails threatening to sue student reporters for invasion of the couple’s “privacy.” Mingo, Yuknavitch and Butterfield declined to comment on Yuknavitch’s involvement, citing the Family Educational Rights and Privacy Act, or FERPA, which protects student information.

“We want to make sure that we’re preserving the fact that her academic records are not going to be disclosed,” said Butterfield.

In the email to Mingo, Goff listed the material that she reviewed to arrive at her decision, which included 54 class rosters. She also looked at grade transcripts and a Cooperative Work Experience application (the college’s internship program) for “a student,” whose name was redacted from the copy that The Print received. The college said this was because of FERPA.

Goff noted in the email that English instructor Matthew Warren was listed as the student’s CWE employer and supervisor at Chiasmus Press, a publisher founded by Mingo and Yuknavitch. They launched Chiasmus as a counterpoint to Pacific Northwest literary culture, which Yuknavitch described online as “salmon, old growth, and dusty poet dudes.”

“If there is paperwork showing otherwise, I would very much like to see it,” Warren said in the email to Goff. Warren declined to comment.

In the Jan. 5 email to Mingo, Goff further described her findings.

“Based on my review of these materials,” Goff said in the email, “I found evidence of your passing at least one student [redacted] without any basis for assigning a grade. The records indicate that [redacted] erroneously claimed Matthew Warren as [redacted] CWE employer without his knowledge.”

She added: “It is my finding that you had direct knowledge that Matthew Warren was not the CWE employer, and that you assigned a false grade to [redacted].

“Additionally, several of the class rosters I reviewed had very few students listed and in the case of three classes, only [redacted] was enrolled.”

The college registrar confirmed in an email that Yuknavitch was enrolled at CCC from fall 2008 to fall 2015 with a major listed as “entry level multimedia journalist.” While the college would not disclose Yuknavitch’s name on investigative reports regarding Mingo due to FERPA, it is allowed to release information such as dates of enrollment and area of study.

Yuknavitch earned a Bachelor of Arts in English from the University of Oregon in 1989 and a PhD in English from UO in 1998. She is an instructor at Mt. Hood Community College, where she is teaching American Literature, Creative Writing and Introduction to Women’s Studies during spring term, according to MHCC.

Yuknavitch’s writing explicitly details her personal life, including how she met Mingo when he was a graduate student of hers at San Diego State University and a play by play of their first sexual encounter.

In her February 2016 TED talk titled, “Lidia Yuknavitch: the beauty of being a misfit,” Yuknavitch describes some of her life story.

“I’ve flunked out of college, not once, but twice, and maybe even a third time that I’m not going to tell you about,” Yuknavitch said in the TED talk, filmed around the time of Mingo’s resignation.

Goff said in the Jan. 6 email to Mingo that she would forward the results of her investigation to Patricia Anderson Wieck, the dean of human resources at the college. Anderson Wieck would not comment on the matter.

In late January 2016, the college hired Portland lawyer Chrys Martin of the Davis Wright Tremaine law firm in Portland to “perform an independent personnel investigation,” per an email from the law firm to then Vice President of College Services Jim Huckestein. It’s unclear whether Martin was hired to investigate Mingo or another employee.

The college paid a total of $13,531.50 to the firm, according to invoices. But in response to The Print’s request for documents, the college denied being in possession of any notes from Martin, and cited attorney-client privilege.

On Feb. 5, 2016, Mingo resigned his full-time faculty position and signed an agreement under which he agreed to “never knowingly apply to the CCC for any job or position in the future” and to return all property to the college. The college agreed to provide a letter of reference, but the resignation agreement also included a non-disparagement clause.

The non-disparagement clause begins, “The parties agree that neither party shall make disparaging or damaging remarks to the media or other third parties about one another, and that any such remarks would constitute a breach of this agreement.”

After Mingo and Huckestein signed the agreement, Anderson Wieck sent an email to college officials including President Joanne Truesdell under the subject line, “non-disparagement instructions and process,” which included language that she and CCC’s attorney had agreed to send to certain faculty members.

“We thank Instructor Mingo for all his contributions to the College community and wish him the best in his future endeavors,” Anderson Wieck said in the email to staff.

After Mingo left the college, he has continued to pursue filmmaking. He is currently working with “Fight Club” author Chuck Palahniuk on a movie adaption of Palahniuk’s novel “Lullaby.”

Matthew Rowning and Collin Berend contributed to this story. 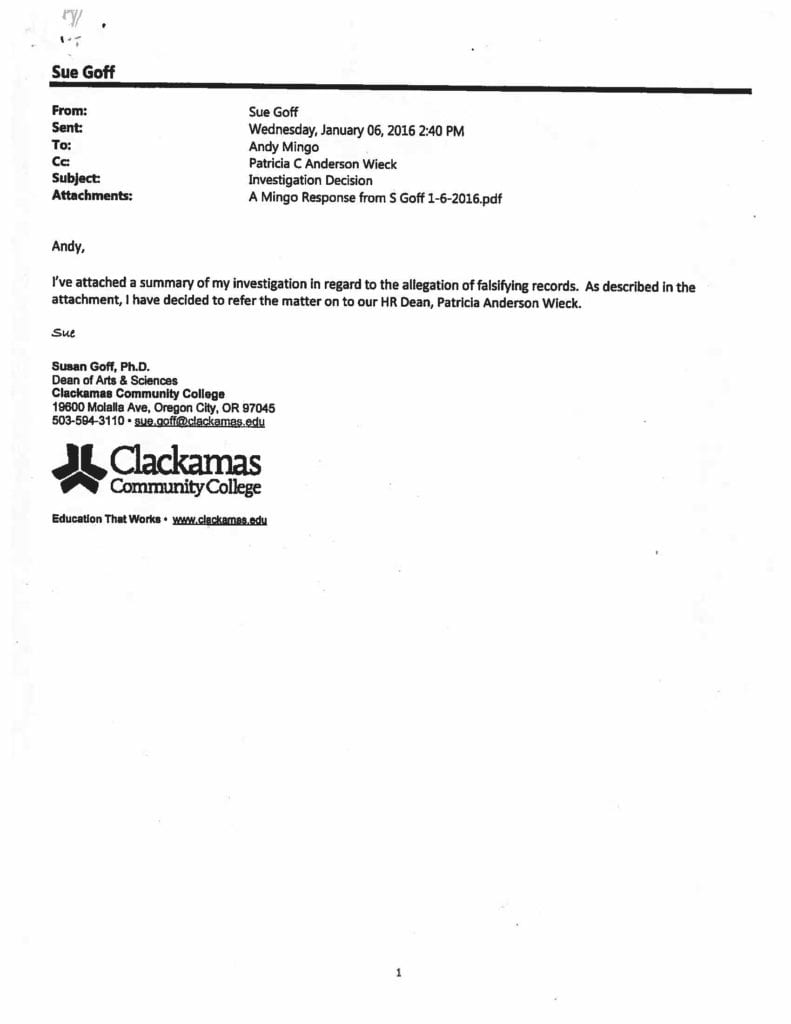 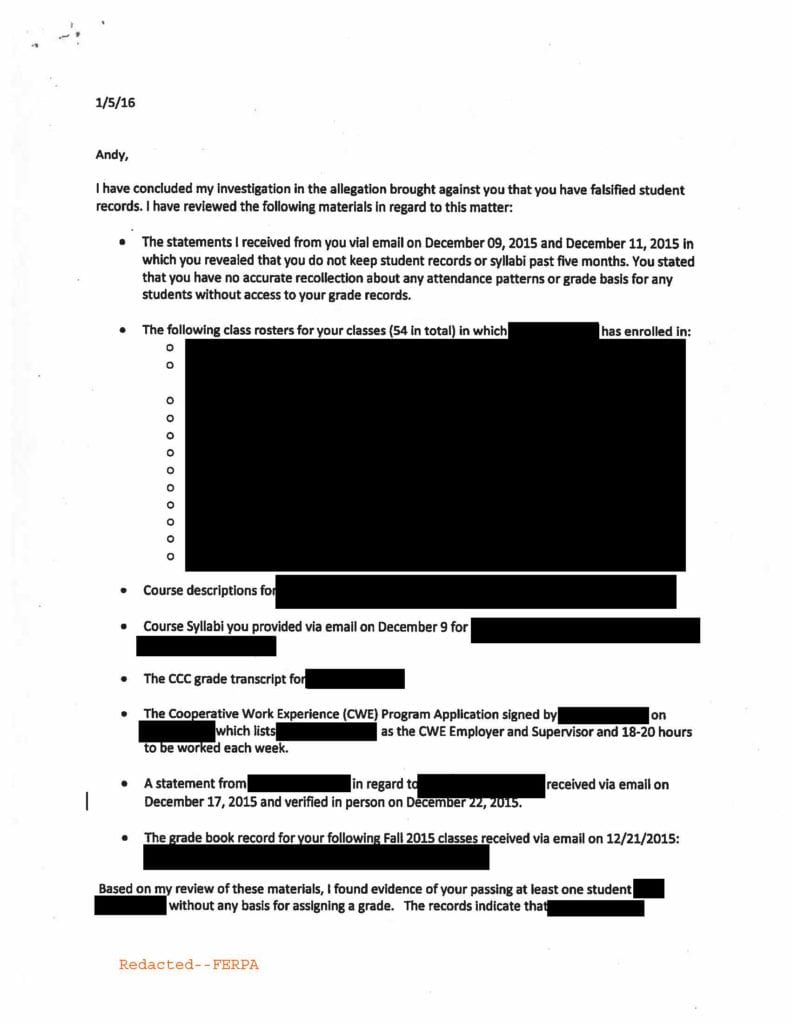 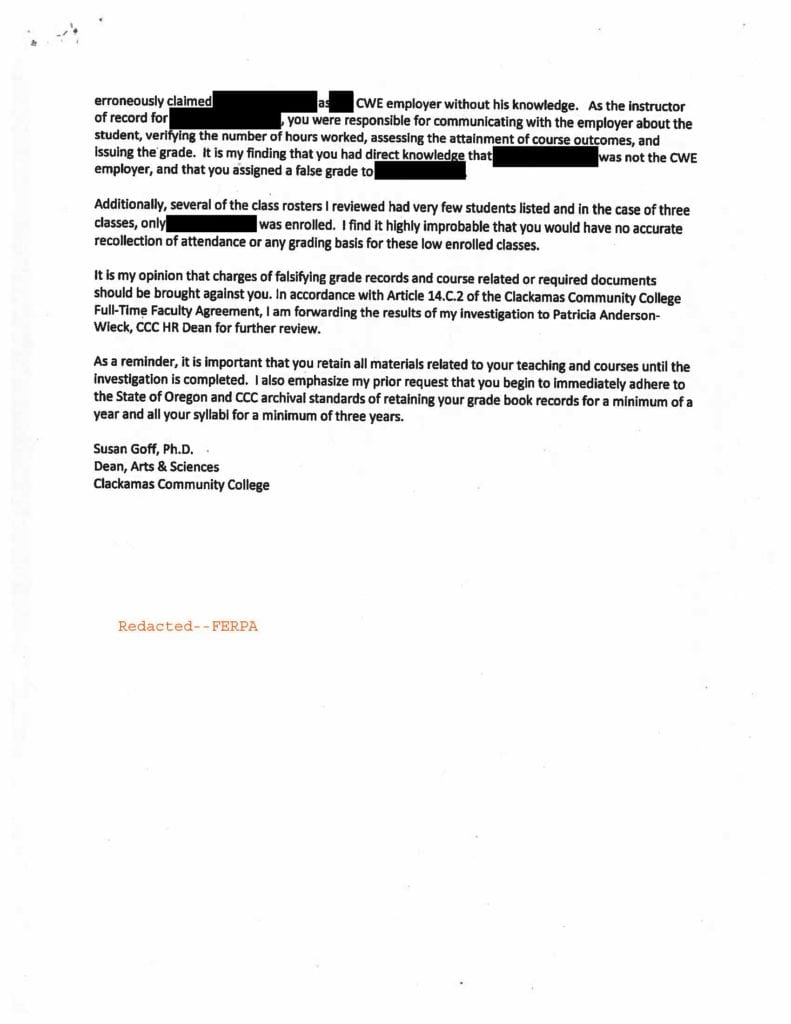 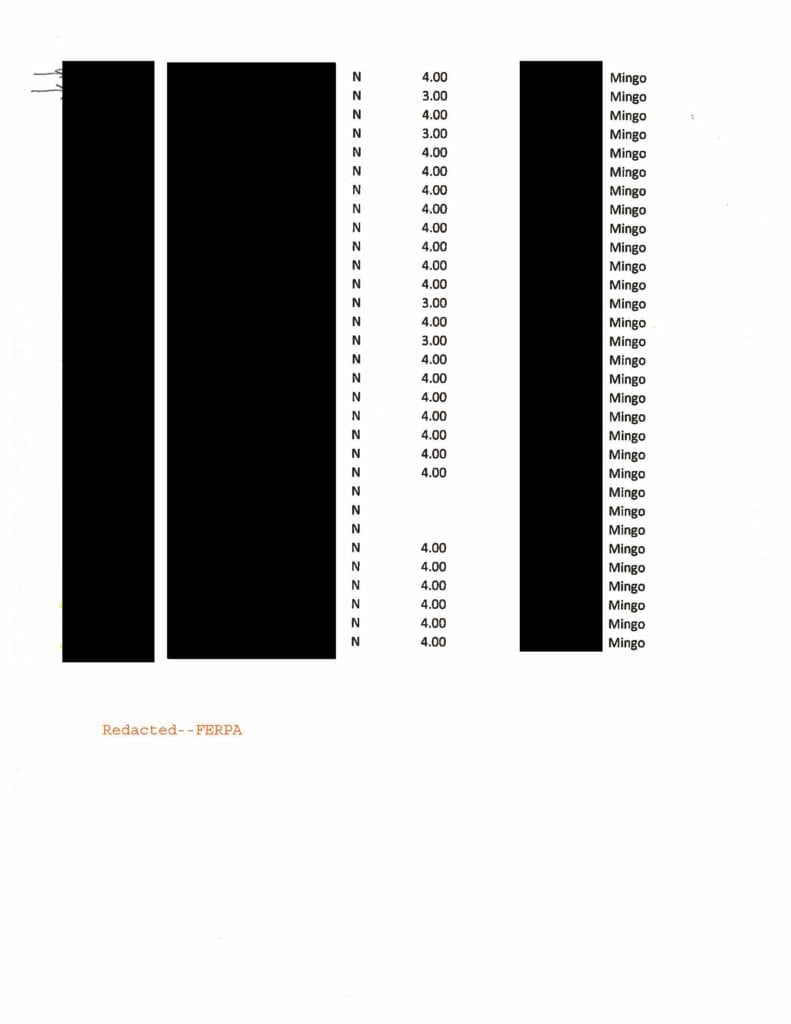 The college collected more than 60 pages of documents in its investigation of Mingo.

All documents can be viewed here.

Letter from the editors –

More than a year has passed since The Clackamas Print started asking questions about the abrupt resignation in February 2016 of longtime instructor Andy Mingo.

All we wanted to do was find out why he left, but everyone at the college had a similar reply: no comment.

Again and again, we were thwarted from reporting this story.

We asked for public records, and the college took months to provide documents and charged us more than $900 in fees to produce them.

We requested emails with the name “Andy,” and when we got back incomplete records, the college admitted its staff had accidentally searched for the word “and” instead of “Andy.”

When we did receive records, they were redacted, with names blacked out so we couldn’t read them.

We still can’t get detailed information about the external investigation conducted by an outside law firm.

The college paid more than $13,000 to Davis Wright Tremaine last spring to look into employee conduct at the college, but the college says it won’t release that information because of “attorney client privilege.”

In the interim, we’ve received threatening letters from the attorney hired by Andy Mingo and his wife Lidia Yuknavitch.

One letter written by Mingo’s attorney Lisanne Butterfield, threatened, “Please contact me at your soonest to confirm that you have not violated or compromised my clients’ rights to privacy. If we do not receive a satisfactory response from you on or before May 10, 2017, my clients will feel free to pursue formal legal claims against you personally.”

The attorney said if we write anything unauthorized about her clients, we should be prepared for a lawsuit.

We were forced to hire our own attorney to protect ourselves.

We believe it’s the college’s duty to be honest and transparent about what is going on with its employees without charging its public – or its own students – exorbitant fees.

We also believe that when high profile public school instructors are involved in college investigations, it’s the public’s right to know.