He left a legacy that will be near impossible to duplicate and his friendship will never be replaced.

On Saturday, March 21, Clackamas Community College lost manufacturing instructor Chris Rizzo in a motorcycle accident. Those who knew him know they’ve lost a friend, a great teacher and so much more.

“Chris loved to tell a good story,” said English instructor Amanda Coffey. “He was a great speaker, he told jokes, he made everybody laugh cause he was such a great guy. Comfortable with himself, made everybody relax.”

Coffey met Rizzo while working on the faculty senate, which represents and
supports the faculty at CCC. She had known him for about a year.

“He was the kind of guy who made you feel like you’d known him for a really long time,” said
Coffey. When she left the campus late at night, Rizzo would walk her to her car.

Michelle Meyer, administrative coordinator, said, “He would look at you like you were the only person in the room,” when describing what it is was like to talk with Rizzo.

“He brought a lot of energy and made me excited to be there,” said Buck Rich a former student turned teacher’s assistant and lab instructor at CCC. While he was a student, Rich liked to be the center of attention and would sit in the back row.

“Chris didn’t like having to walk all around the desks and so he would jump over the other computers and desks because it was quicker to get to the back row where I was at,” said Rich. “And that was his little Rizzo Route that he would take. So that was in the first week, and I knew right away, like, ‘cool this guy is willing to jump over desks for people,’ you know?”

Fellow instructors Bob DelGatto and Wes Locke described Rizzo as an innovator, someone who had to be on the cutting edge of everything and liked to push the envelope.

“If he were to read a sale brochure that he thought probably wouldn’t work, he would want to try it and see if the tool breaks,” said Locke.

Although Rizzo was competitive and accomplished many things, he didn’t have an ego.

“I mean it was really amazing,” said DelGatto. “That was one of the things about Chris, and we kind of discovered this with his folks. His folks didn’t really know a lot of what Chris had accomplished because Chris doesn’t brag. He doesn’t talk about himself.”

“I feel sad for students who won’t have the chance to have a class with him,” said DelGatto. He remembered a student who spoke at the memorial service who talked about Rizzo’s competitive nature on the race track, but when he came into the classroom, he left the competitiveness at the door. Rizzo was concerned with the success of students and didn’t want to be the reason his students weren’t successful.

Craig Anderson, manufacturing and pre-engineering instructor, said, “He was dedicated to teaching, he would even be here [CCC] on weekends.”
David Ward, solid modeling CDT 108a instructor, said, “Chris had a lot of students who really, really loved him.”

“Everybody really looked forward to taking his classes, they would be like ‘I’m in Chris Rizzo’s class, alright!’ You know, they were really excited about it.”
CCC student Matt Eastman said, “He was a real great guy and he was a CNC wizard…He seemed kinda scatter-brained when I first met him, but when he started to talk about something it was like reading a dictionary. All kinds of information just spilled out.”

Rizzo advanced the program and provided opportunities for students. Looking ahead, those in the manufacturing department know that Rizzo’s talent, personality and genuine care for students can never be replaced.

“People that knew Chris are going to miss him,” said Anderson.

A memorial scholarship is being set up in memory of Rizzo. Donations can be made at https://give.clackamas.edu/ChristopherRizzo#.VSsGOZTF97x. 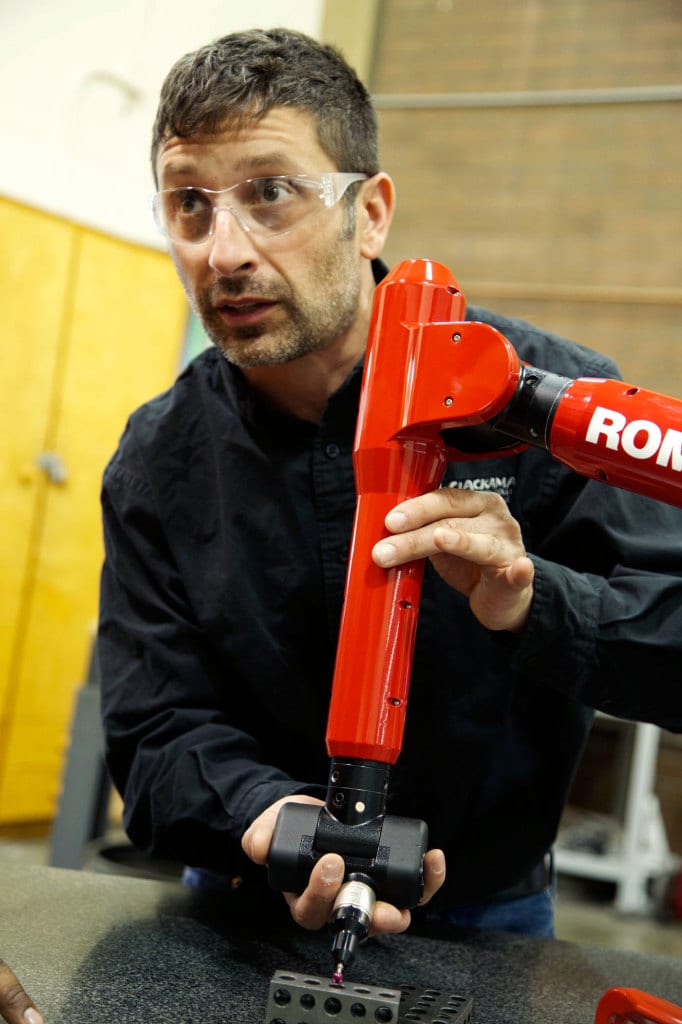