Eric Bronson is a student at Clackamas Community College and has been for 25 years. He is currently working on an Associate of Science with a focus on creative writing and authored his first book, “The Juggler’s Girl.”

The Clackamas Print: Is there any particular reason you’ve been a student for so long?
Eric Bronson: The tuition waiver is nice. I’m retired now and I can’t just sit home and watch game shows, so I put myself to work here. I graduated from George Fox [University] in the mid 80s. I was a human resource major, but I didn’t have a minor so now I’m finally finishing up a degree here in creative writing, and I consider that my minor.

TCP: Did you use the degree you earned at George Fox University before you retired?
EB: No. I did work in the S1 section in the Army. I’m a retired soldier, almost all of it in the reserve component. S1 is their personnel department, so that’s as close as I came. In retrospect, that wasn’t the best thing in which to major. I think I would have been much happier as an English major, as I am now. I love to write. I live to write. If someone asked me what I do, I’d either say I’m retired or I’m a writer. I just published my first novel.

TCP: Do you have any career objectives in mind for your creative writing degree?
EB: I’m going to continue writing. It’s not really a career. It’s costing me more than I’ll ever make. It is something to do. If you stop moving, you start dying. I can’t do that, and this is what I do.

TCP: Tell me about your novel.
EB: My son is a semi-professional juggler. Everybody says the picture looks like him [on the cover]. My nephew Travis Smith [illustrated it], he’s a graphic artist for Dutch Bros. I dropped the idea on him last August, on his wedding day in fact, and he put this together for me, the cover art and this interior one. No color inside, that drives the price of the printing way, way, up.

TCP: Have you written other novels?
EB: I’ve dabbled in fan fiction, which you can’t publish. That is just strictly online. This is the only hold-it-in-your-hand book that I’ve done [The Juggler’s Girl]. I’m having to make some corrections. It turns out my copy editor damaged it, but I have access to the lab upstairs and the InDesign program to review work there.

TCP: Do you have a website for your fan fiction?
EB: Yeah, it’s called Sink Into Your Eyes: www.siye.co.uk. It’s Harry Potter, essentially. I don’t own the site, but we have a senior staff. We have about 10,000 members, thousands and thousands of short stories and book links. I got recruited into the senior staff a while back and it’s a handful sometimes, but I’m getting away from that quite a bit because, well obviously, you can’t publish any of it because it belongs to Ms. Rowling, but it’s still fun.

TCP: Why did you decide to participate in the Veterans Poetry Reading last term?
EB: I’ve never written that kind of story before, or veterans writings, or military writing, anything like that and I was curious. I mean we’ve all read “Red Badge of Courage” or “All Quiet on the Western Front,” … but I was curious how it would be. So I prepared something, something very short, and I went there and I went story and photo by cassidy white 25-year Student ready to graduate retired veteran enjoys writing there mostly for perspective and for curiosity and I ended up participating and I enjoyed it. I’ll probably do that again if I’m still in school next Veterans Day. Oh, I’ve got to graduate eventually.

TCP: When are you expecting to graduate?
EB: I’m hoping by Christmas, at the end of fall term, at least having the degree. I’ll take the occasional class, but I’m thinking I might want to get some more parttime work, just something to add to the spending money. Besides, the teachers are probably getting sick of me after all these years. I’ve taken classes in everything you can imagine: business, science, math, philosophy, a lot of English obviously and writing. I have no idea how many credits I’ve accumulated over time. I’m getting to the point now where maybe I want to move on away from campus and I want to cross that line from career student to alumni. It’s sort of something to cross off the bucket list as far as I’ll have a degree in writing, something I’ve taken up as a strong avocation. 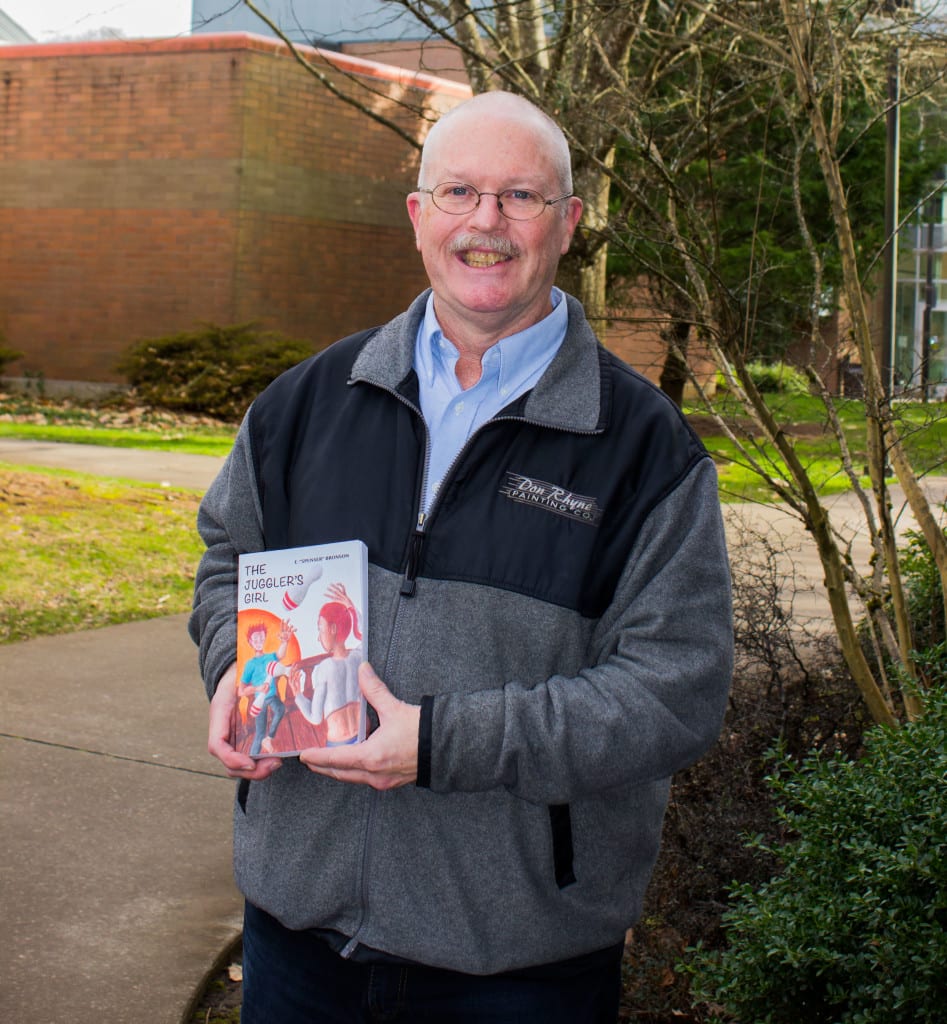 Eric Bronson proudly displays a copy of “The Juggler’s Girl.”