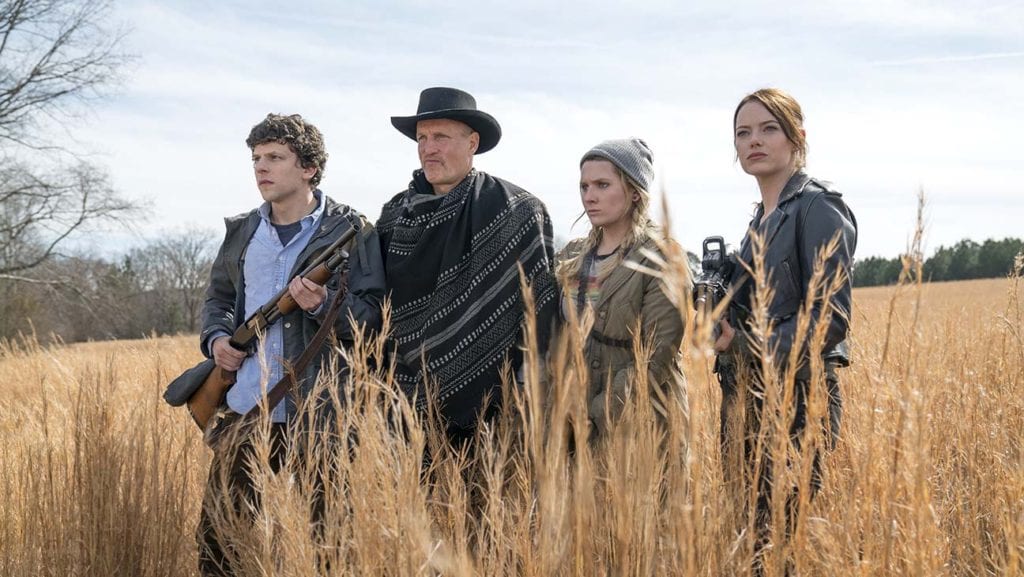 Ten years ago the world was blessed with “Zombieland,” an hour-and-a-half of pure, unadulterated chaos set in a post-apocalyptic America and the borderline deranged individuals that thrive in it. After an extensive period of oversaturation in the zombie-action genre, “Zombieland 2: Double Tap” returns with attitude to blow away the competition. Featuring the original four nomadic zombie slayers, this time with numerous film awards under their belts, “Zombieland 2: Double Tap” does a decent job of providing fresh material without straying too far from the narrative that earned the original “Zombieland” $75 million in 2009.

A decade is an absurd amount of time for a professional in the film industry, though you’d be hard-pressed to spot the aging of any of the cast other than Abigail Breslin, who played Little Rock. Breslin was 14 years old when “Zombieland” hit theaters, and after 10 years it’s clear to see she has grown just as much as an actor as she has a person. Eisenberg, Harrelson and Stone have all aged incredibly well and the chemistry between the four provides the driving force throughout the film.

In a time where sequels are a dime-a-dozen it’s hard to capture the attention of an audience that has hundreds of options to choose from on a daily basis. Though if there was any genre that could give this movie a boost, it’s action. Much like its predecessor, “Zombieland 2” delivers scene after scene of over-the-top zombie bashing and enough rock and roll montages to last a lifetime, a majority of them coming from Harrelson’s psychotic, yet lovable persona Tallahassee. He and Eisenberg’s ability to play off of each other has grown substantially since 2009 and if it weren’t for them, this movie might not be worth seeing at all.

Though this movie features an already solid group of actors, there’s several new faces that only add to the zombie killing hype train. Rosario Dawson stood out the most, playing Harrelson’s love interest. Dawson fits the set and setting like a glove with her intimidating one-liners and snappy comebacks. Zoey Deutch is another unsuspected lottery pick that killed every second the writers gave her; Luke Wilson and Thomas Middleditch also kill it in this one as the mirrors of Harrelson and Eisenberg’s characters.

While the movie was a thrill to watch, unfortunately the studio decided to release a pair of “Zombieland 2” games, one for console and one for mobile. The mobile game is a fairly acceptable idle clicker where you mindlessly tap the screen and avoid paying for overpriced in-game currency, but this is standard for many movies. The console game, however, looks as though they meant to release it back in 2009 with the original movie. The game is horrendous both visually and gameplay wise and to make matters worse they’re charging $40 for it. In short, steer clear of the games, enjoy the movie.

For those who remember “Zombieland” for the gruesome and unnecessary slaying of Bill Murray, this installment pays homage to the king of comedy in one of the most satisfying ways possible, so be sure to stick around until the very end. After 10 years it’s hard to believe a sequel could live up to the hype; whether you’ve been waiting for this for what seems like eternity, or you’re just looking for a fun and easy movie to watch with friends or on date night, look no further than “Zombieland 2: Double Tap.”