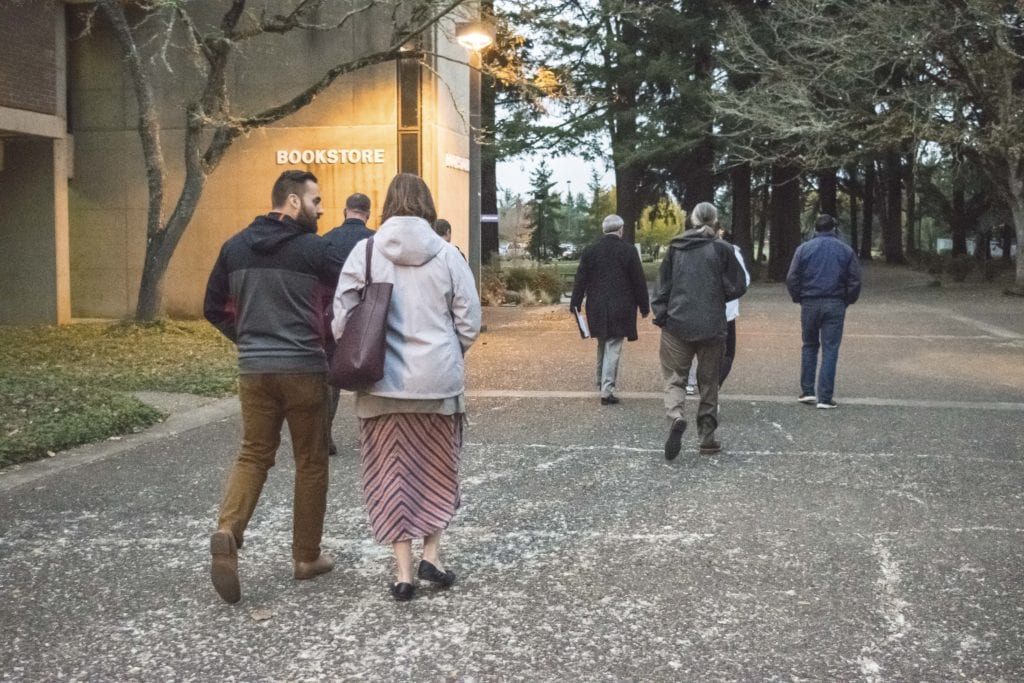 CAMPUS SECURITY LOOK FOR WAYS TO IMPROVE SAFETY AROUND CAMPUS

Story and photos by Jeanette Wright

As the weather gets colder, and the days get shorter, safety issues on campus after dark are more prominent. The Campus Safety is adjusting to new members and equipment, and working to improve their performance and practices. Changing on-campus dynamics, new laws, and new infractions are prompting responses from the department.

On Nov. 1, the safety team began one of their newest practices, the Safety Walk. The walk was an idea proposed by the Associated Student Government. Campus Safety attended the recent ASG meeting to talk about their job and what they do, and to ask for ideas on how to make the campus safer. The Safety Walk was brought up, and Philip Zerzan, CCC’s director of campus safety, was enthusiastic about the idea, having seen it in practice during his years at Portland State University. Zerzan plans to make the walk biannual, surveying campus once in the Spring, and once in the Fall.

The purpose of the Safety Walk is to provide an opportunity to identify safety problems on campus, especially after dark. Several students in the ASG joined Zerzan on the walk, along with members of his safety team, Public Information Officer Lori Hall and other faculty.

“It’d be interesting to see what you guys as students can pull out of it,” said Hall. “You know, any changes or recommendations you guys can make.” They walked through the campus and along the limits of the CCC property line, talking and taking notes on their observations.

Students are encouraged to participate in the walk, and share feedback with the safety team. No students outside of the ASG showed up, but Zerzan said that even at PSU, low student involvement is common. Zerzan said it’s important for students to voice their observations and questions, so the safety team can learn about student-specific concerns.

ASG Vice President Daniel Romero Vazquez said he believes the safety walk will be helpful in providing reference for the safety team. Vazquez was very active in looking for problems, walking ahead of the group and noticing dark corners and lights that were out.

Lighting was the largest problem noticed around campus. The campus lights are programmed on a timer, to turn on at certain times, but not all the lights run on the same system. Lights around the McLoughlin and Niemeyer buildings were not on yet, even though the campus was quickly getting darker. Zerzan said the team will adjust the timers to make sure the lights are all coming on at appropriate times.

The trees near Streeter Hall also posed a lighting problem, and by 6:30 p.m., seeing past the foliage without a flashlight was impossible. Behind Pauling is also bare of lights, and Safety Officer Tatevik Ambaryan said the cluster of boulders behind Pauling is a problem area, with people hiding behind the rocks to sleep. Large bushes around the building corners also block vision, which adds to the issue of low lighting. The visibility problems were magnified by the daylight- bright lights in the new parking lot behind Barlow.

“Recognizing the danger is a requirement for people in leadership positions,” said ASG member and multicultural ambassador Shiho Saito. CCC and the safety team are working hard to make the campus safer for everyone, and the Safety Walk is just one way to raise awareness for both the students and the team.

“I think [the safety walk] gave people some familiarity of what the campus looks like after dark,” said Zerzan.

Lights and shadows aren’t ASG’s only concern, though. Saito is hoping to get longer operating hours for the ASG, to better serve students. One big limitation keeping that from happening is that the facility keys must be turned in early in the evening.

Saito wants CCC to move to key cards, which would enable ASG members to be available later in the day, and make opening and closing much easier. When asked about the issue, Zerzan said CCC is in the middle of a three-year plan headed in that direction, and switching to card keys is his top priority.

Addressing the issues that came to light on the walk is just the beginning, and involving more students in the process is important. ASG feels that the Safety Walk is a good launching pad for a safer campus, and better communication between students and faculty.