Some people steal artwork from Picasso, some from Michelangelo while others steal sculptures from Clackamas Community College. A total of 19 sculptures were displayed around campus as a part of the college’s 50th anniversary celebration.

Kelly White, administrative assistant in the Art Department, said, “Officer Tim Cato saw off in the distance, toward the bookstore walkway, three youths carrying three sculptures. He realized that they were carrying sculptures from the sculpture invitational and he began to drive quickly. The kids noticed that he was coming and they dropped the sculptures in the parking lot and the sculptures were shattered.”

“The three youths ran into the apartment complex area and he had to drive around the campus. When he got to the complex he lost the three kids,” said White.

The sculpture that was completely destroyed was JD Perkin’s “Strapped Huddle.” The sculpture was the size of three small children. They were facing inward all on the same platform but when dislodged it looked like three separate sculptures.

Junko Iijima’s “Footprints,” that resembled Mickey Mouse’s feet, were also damaged. Although heavy and cement glued to the ground, some feet were dislodged but not taken.

According to White, the sculpture that was destroyed will be returned to the artists and the “Footprints” will be put back in place. Artists loaned their artwork to the college until June 3.

According to Cato, the investigation of the incident is ongoing. 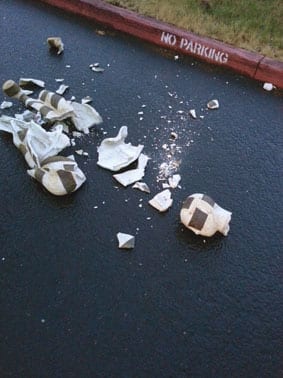