Signal to Noise Strikes a Cord on Campus 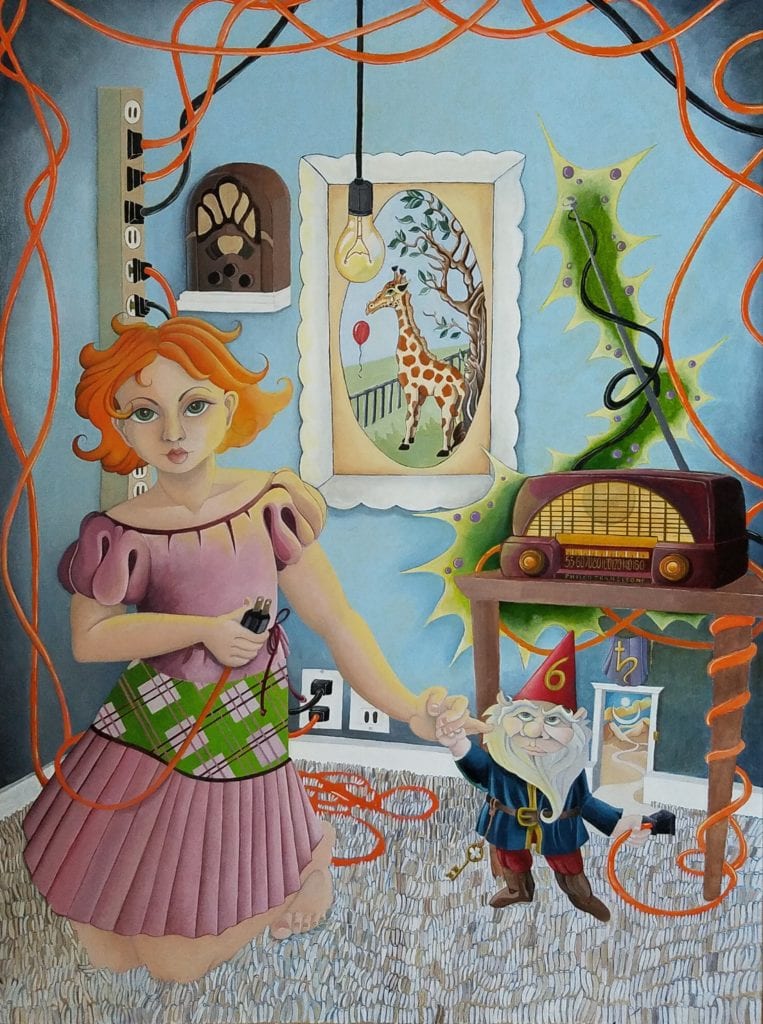 A new art exhibition has come to Clackamas Community College’s Oregon City campus. From Nov. 7 to Dec. 3 the art of Jennifer Ingram, a local surreal artist, will be on display in the Pauling Gallery in the Pauling Center.

“I’m kind of like a transplant up here in the Northwest,” Ingram said. “I was born in the Mojave Desert in southern California.”

Homeschooled from the sixth grade on, Ingram’s mother served as a major influence in her decision to pursue her career as an artist. Also an artist, her mother taught her many of the foundational elements, creating the beginnings of her passion for the world of art.

“It was kind of like our time together,” said Ingram. “She would sit down with me and invent characters and taught me the basics of shading and coloring. It just became the thing that I wanted to do. Since I was a kid it was the one thing I wanted to do.”

Ingram returned to school during her college years where she attended art classes that helped grow her preexisting interest in the arts. During this time, Ingram began to explore her own vision, her own style of art and truly began to experiment with what that would look like on paper.

In 2010 Ingram moved to Southern Washington, continuing her work as an artist in her new environment. Despite the move, much of her work is influenced by the environments of her childhood. In her artist statement, Ingram says, “My art is profoundly influenced by the extremes of the desert environment, which is where I grew up. The struggle with which life must endure to survive the extreme temperatures and limited resources.”

Another inspiration for her art comes from her struggle with bipolar disorder. Also known as manic-depressive illness, bipolar disorder is a condition that causes extreme mood swings, from extreme highs to extreme lows.

This disorder has greatly influenced her work in many ways, according to Ingram. Though it affects her productivity, says Ingram, it also has an effect on the art that she creates. One piece, the Bloodflower Stew, was created based off a depressive period that she experienced. The work is a reflection of how she felt during that period of time.

“If you look at the symbols,” said Ingram, “like in ‘Altars in the Sand’, there’s the two boxes where one is a white face and one is a dark face. One is kind of the subconscious and one is the conscious, and one is the depressed and one is the manic. I’m always looking for way to bring those two together and find equilibrium between the two instead of living in the extremes of the duality.”

The name of the exhibit, Signal to Noise, references her disorder, specifically the dualism that exists within herself due to the disorder. She describes the disorder as almost having two personalities living inside of her, one energetic and active, while the other exhibits the opposite personality traits. Due to her art also containing elements of this dual identity, she wanted to find a name that conveyed this duality.

When Ingram was young, her parents were interested in amateur radio. This introduced her to some of the elements of radio, including the term signal to noise. Referencing the level of the desired signal to the background noise, Ingram relates her work to this idea.

Though Ingram has a vision for her work, a message that she includes, she also stated that she wants others to be able to bring their own stories, their own interpretations.

“It’s about the creator as well as the viewer,” said Ingram. “I just think that art can be seen on so many different levels and layers. You might have what the artist intended it to mean and their personal story, but then each individual person who comes to see that work might have their own story. And each one is just as valid as what the creator intended.”

For those attending the exhibition, Ingram states that her favorite piece is ‘What I Learned in Sunday School’. On her Instagram, Ingram describes the piece: “It’s really about bipolar disorder and my experience with it, and the ultimate mental fires that come between states of mania and depression. I’ve always sought this middle state where elements of both could survive without ever leading to extremes, thus the rainbow in the middle.”

She credits much of what she was able to accomplish with this piece to her experience creating the exhibition’s signature piece, Signal to Noise. Completed in about three months, Ingram believes that the experience creating her largest piece of work to date helped her grow immensely. The creation of ‘What I Learned in Sunday School’ was much easier, completed in only a fraction of the time, in large part due to that experience and growth.

Ingram’s art will be available to view until Dec. 3. If you wish to see more of her work, much of it can be found on her Instagram, @pinkpoppy32. Also available are in-progress shots of her work, giving a glimpse into the creation of her paintings and collage works.