Space talk is out of this world

Story and photo by Elizabeth Kessel 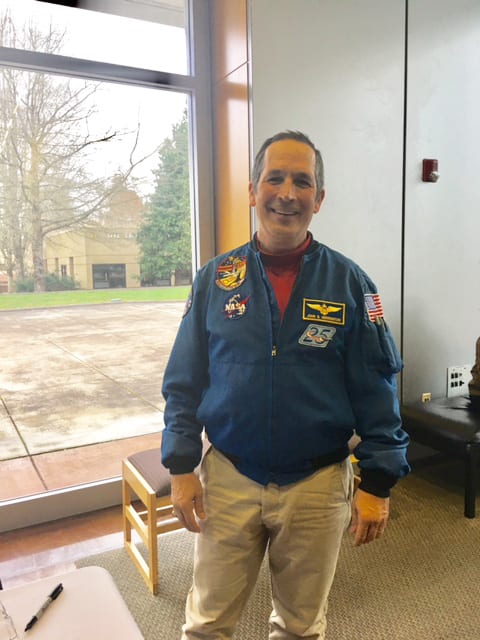 What do you want to be when you grow up?

This is the well-known question kids get from adults, at a time when kids believe they can be anything. Answers vary from being a vet, a doctor, a teacher, president and even an astronaut.

These dreams may seem farfetched to adults, but one of them wasn’t for John Herrington, the first Native American person to go into space.

On March 2, Clackamas Community College hosted its third STEM (science, technology, engineering and math) talk of the academic year. For an hour, about 200 people listened to Herrington talk about his life and how he got to space.

He spoke about the political climate and said how he believes everybody is able to do the same work.

“There are people who are living in fear of being a minority in this country,” Herrington said. “That should not be the way it is. Everybody, as minorities, is capable of doing remarkable things.”

Beforehand, there was a meet and greet with Herrington and students. Xaun Wilson was excited to buy his book and go to his talk.

For 13 days, Herrington was on STS-113 with a mission to assemble the first truss on the left side of the space station P1 Truss and brought a crew of six back to Earth.

Aside from his mission, Herrington showed the audience video clips of what astronauts did in their spare time in space, from space walking to trying to eat floating food.

His advice to college students is to do something you love and that if students are interested in STEM fields, they can’t do the science without the math.

From a teenager who loved rock climbing to now having a Ph.D., Herrington took what he loved to do and made it into his career, which led him back to school and taking courses in relation to STEM.

STEM talks at the college began last year with the goal of introducing students to a whole new world of different career options and developments in the world.

These talks are beneficial to students at the college, providing interesting topics that are fun to either listen to or interact with. At the same time, they teach new information that may help guide students to what they want to do as adults.

College President Joanne Truesdell, who was at the talk, said, “What Dr. Herrington was talking about is applying learning. All of these talks apply something in science into the learning. So you can actually either visualize, or see, or touch, hear what that theory actually means when you put it into practice. And that’s what STEM talks do.”

The next STEM talk will take place on Monday, April 17, and the speaker will be Faron Anslow, a climate scientist and CCC alumnus.