This award isn’t earned on the playing fields but in the classroom. The victory walk isn’t up a podium to receive a medal but across a stage to receive a diploma.

Clackamas Community College has been awarded the NWAC President’s Cup. The NWAC’s President’s Cup is a new award that was started three years ago to recognize student athlete success in the classroom through GPA and students receiving a diploma or certificate when leaving CCC. The award is broken up between large and small schools in the NWAC based on the number of sports available; less than 7 or more than 8.

In the past two years, the college has finished second and fourth.

The President’s Cup was presented in the Randall lobby to Joanne Truesdell on Nov. 10, before the home volleyball game.

Athletic Director Jim Martineau said the lobby was chosen because the student athletes spend time doing their homework and meet with their coaches, mentors and advisers in the lobby.

Truesdell said in an email, “I thank the hard work of all our instructors and coaches here at Clackamas Community College. Their dedication to student success is how CCC fosters student personal growth and academic excellence.”

“We have a great group of coaches who care about their athletes in their sport but more importantly in the classroom,” said PJ Martineau. “It’s a good team effort.”

Being a recipient of the NWAC President’s Cup shows, “The things we try to do well, we actually do,” said Jim Martineau.

“I’d also like to recognize and congratulate all our student athletes,” said Truesdell. 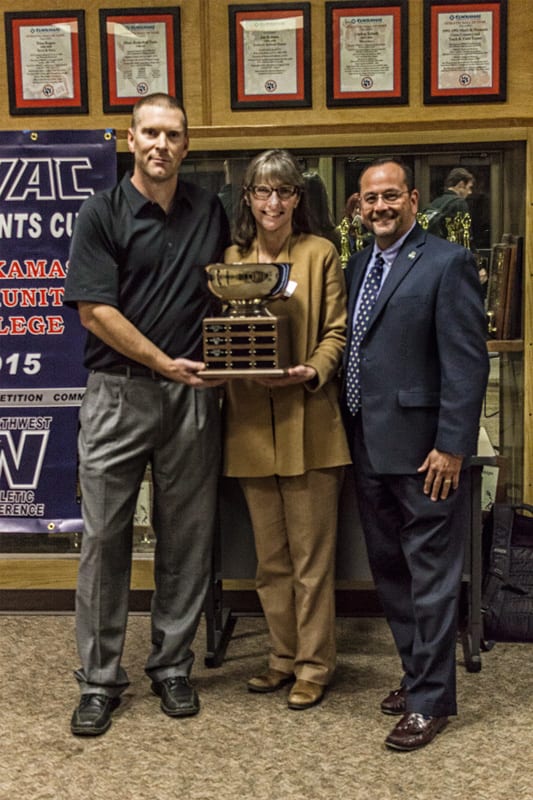