Associated Student Government campaigns are in full swing for those students who wish their voices to be heard with student government. There are two candidates for president — Brent Finkbeiner and Hayley Campa. The candidates were available for a question and answer session on April 22.

For Campa, a great deal of her qualifications came from her experience having been a member of ASG for three years.

“I really have passion for this team,” Campa said. “I mean three years of being on ASG really shows my dedication and my love for this school.”

Campa feels that her experience, as well as her visit to Washington, D.C., will aid her in the leadership role as president. Campa has also been involved in tuition rallies hoping to help freeze tuition. Working alongside Shelly Parini, the Dean of College Advancement, Campa has spoken in Salem to legislators about the importance of affordable tuition. She has also worked to help the college promote the $90 million bond that recently passed and has also worked on the myClackamas survey of what students would like to see evolve at CCC.

Finkbeiner also relies on his experience to help him in his role as president, specifically his service from 2006-10 as a combat medic in the U.S Army.

“[In 2008 I was] deployed to Iraq where I was the lead medical professional for 25 infantry soldiers,” Finkbeiner stated. “I am fully confident in my ability to lead a team of students, strongly and effectively.”

His experience in ASG has spanned three terms and like Campa, Finkbeiner also had the opportunity to travel to Salem to work with the legislature on school funding. Currently Finkbeiner is the chairperson for the first ever Clackamas Cougar Run planning committee.

Another question discussed at the forum was what Campa and Finkbeiner would do as an elected ASG President.

For Finkbeiner, this means helping students’ voices be heard as well as more attention spent on the school budget.

“The president acts as an ex-officio to the Board of Education,” Finkbeiner said. “We are your sole representation at the Board.”

Finkbeiner also explained that the Board of Education is the top decision making body at the college and as such, needs to have student representation: “You need somebody that is willing to play for you.”

As far as budget and tuition goes, if elected, Finkbeiner wants to make sure students know where their tuition money is going, where it is being spent and how it is being used.

“First and foremost … the budget is extremely important and it is very pivotal that we spend your money wisely,” Finkbeiner said. “The first thing I would change within ASG is regular budget reports so that any student at any time can come in and see how their money is being spent.”

Campa also had ideas for changes if elected, of which includes a new officer for the Clubs Department.

“We feel that a club officer, who is in charge of the whole department, which I do right now, could be really beneficial for our team,” Campa said. “Overseeing all the clubs on campus, really working with the clubs and just utilizing them to the best of their ability.”

Both Campa and Finkbeiner agree in their wanting to unite all students, even ones at different campuses. Students at the Harmony and Wilsonville campuses do not sense a presence of ASG and have expressed a desire to get the same attention as the Oregon City campus.

“As president, make sure we have a dedicated team to reaching out to Harmony,” Finkbeiner said.

As a way to unite students, Campa expressed how to communicate even better to the student body.

Candidates responded to what position, if any, the loser would hold after the election.

“We talk a lot about that and whoever loses is still going to stay. We both have decided that regardless of the outcome, we are both going to be here working for you guys,” Finkbeiner added. “Hayley and I have been working hard together on a lot of stuff for students, so really this isn’t about us, it is about you guys and whoever you guys decide for president, the students win either way.” 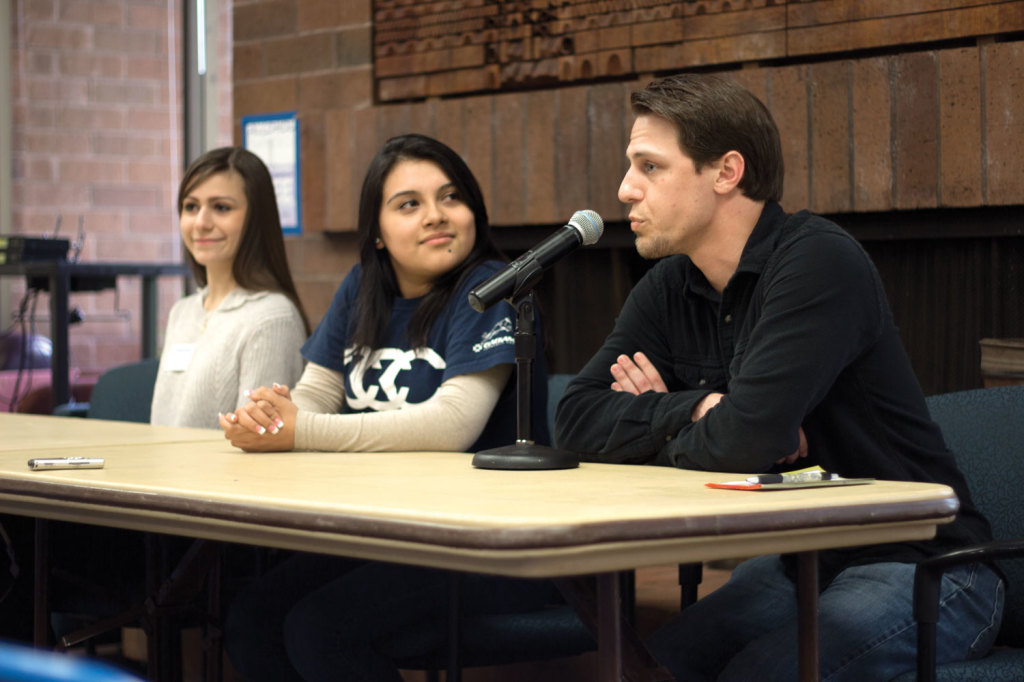 From left, Hayley Campa, Ruby Ramirez and Brent Finkbeiner sit in the Community Center during a forum on April 22. Finkbeiner and Campa are running for the position of president.