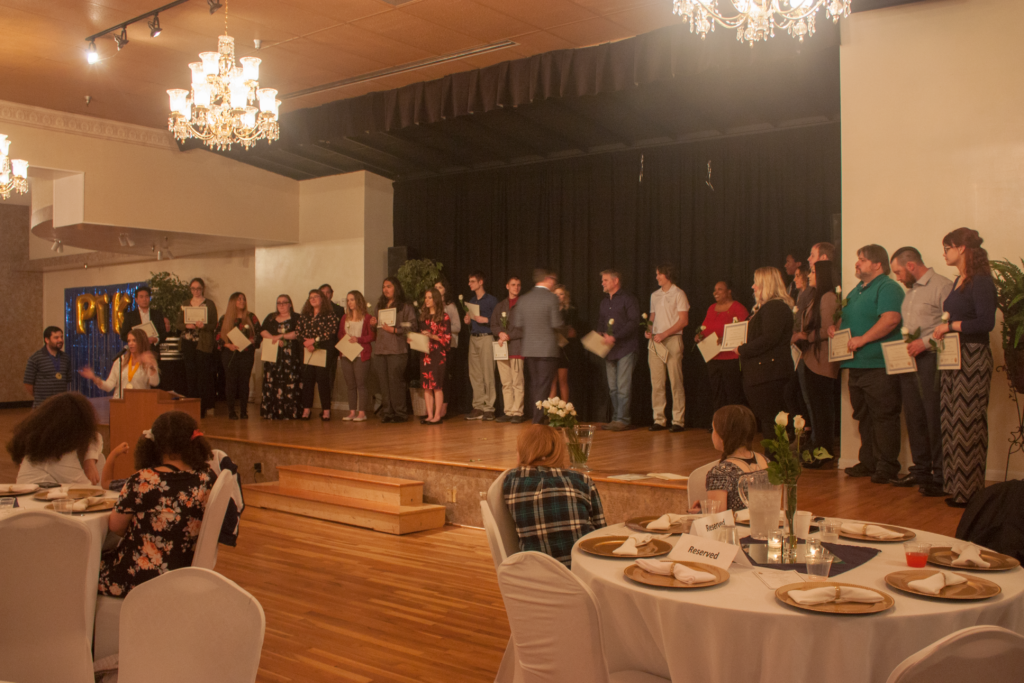 Another class of Clackamas Community College students was inducted into Alpha Xi Zeta, the local chapter of Phi Theta Kappa Honor Society. Students must make the CCC honor roll — which requires achieving a 3.5 grade-point average — to be invited to join PTK. Those who were invited and accepted were honored at a ceremony at the Elks Lodge in Oregon City on Wednesday, May 15.

“Well, it’s definitely an achievement. [I’ve] never really got inducted into much of anything before,” said Alexander Novitchkov-Burbank, an inductee and now recording officer for the local PTK chapter.

The event included a dinner, ceremony and several speeches. The first speech was from Jason Ward, an alumni advisory board member for the Rocky Mountain Cascade Region of PTK, who spoke about his journey and how the honor society has improved his life.

“Something else that I’ve gotten out of Phi Theta Kappa is the knowledge that I have the ability to set goals and obtain them, and I don’t think I would have that sense of self-efficacy if I hadn’t set my sights on getting involved with this honor society,” Ward said.

Ward also touched on the students’ potential, saying they were a room full of mentees that just need “a little bit of guidance, a little encouragement and the world can be yours,” before he ceded the floor to CCC president Tim Cook. Cook was first met with the surprise of being named an honorary PTK member before diving into his speech. He spent his time elaborating on some of his story and on why these students’ accomplishments are so important. Cook spoke about concerns over a changing economy and how things like automation will affect the future job market, and why the skills that can be improved as a PTK member are, and will be, so important.

“But the types of things I just described like curiosity and grit and the rest are uniquely human skills that we have. So being a part of an organization like Phi Theta Kappa is really a good opportunity to hone these skills and really a nice opportunity that you want to be sure to take advantage of,” Cook said. “And if it doesn’t work we just need to make friends with the robots.”

The last speech of the night came from Michelle Gietl, the regional coordinator of the Rocky Mountain Cascade Region. Gietl spent the majority of her time speaking about turning obstacles into opportunities while also noting that it was the largest induction class she had seen, with more than 100 in attendance. Gietl shared her own obstacles — such as having emergency open-heart surgery at 30 — and how she overcame them before leaving the crowd with a quote of hers.

“Don’t judge someone for how long it takes to achieve their goals. Take time to understand the path they took to get there, you might learn something,” Gietl said as she read the paper that she keeps on her at all times before closing her speech by congratulating the inductees.

After the speeches attendees were left to mingle as the night wound to a close. It was one meant to honor past accomplishments, and to look forward to all the opportunities the future may bring. One student who is now the public relations officer of the local PTK chapter, Ryan Balderas, summed up neatly the benefits of joining the honor society.

“I don’t want to base everything down to its quantitative aspects, but it is,” Balderas said. ”Having something show that I’m putting extra effort outside of my curriculars — outside of my academics — it means something to a lot of people.”