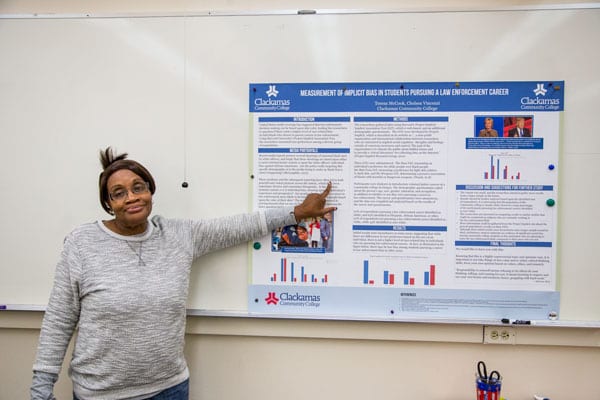 Teresa McCook explains the poster, “Measurement of Implicit Bias in Students Pursuing a Law Enforcement Career,” that won second place in the competition.

Entering a competition is a journey that not everyone will win, but these Clackamas students did.
The Western Association of Criminal Justice is affiliated with the Academy of Criminal Justice Sciences and they have regional conferences every year, usually at different locations. On Oct. 12-14, the conference and poster competition took place in Las Vegas.
“Not all of the regional affiliations have student poster session awards,” said Alison Burke, the president of the WACJ. “We are able to win a monetary award for outstanding posters.”
Teresa McCook, a Clackamas student, and Chelsea Vincenzi, a former CCC student who has moved on to Marylhurst University, conducted their research during summer term of 2016. They completed their poster titled “Measurement of Implicit Bias in Students Pursuing a Law Enforcement Career.”
They collected data using Harvard University’s Project Implicit Association Test, which students took in the classes Introduction to Law enforcement and Criminology.
Their research measured the race-related bias in individuals going into law enforcement careers as opposed to people who are not. The students took three IAT tests.
“They had to take the light skin versus dark skin, preference for black faces over white faces and association of dangerous weapons with African Americans,” said Ida Flippo, a Criminal Justice instructor at the college. “Those were the three that we identified that we thought would give us the most interesting information and relevant information for what we were trying to study.”
After McCook and Vincenzi completed the poster, Flippo helped the girls prepare for what a poster session is like. Several staff and faculty on campus came over to look at the poster, asked questions and gave their feedback to the students.
“I thought it was really good. They did a good job,” said Sharron Furno, a Criminal Justice instructor. “They followed all the directions and guidelines to a tee.”
Then came the WACJ competition. There were 11 total poster entries and three judges.
“When they first came in, I was going around looking,” said McCook. “I was nervous then, but by the time they got to the second person, I was fine. I was like, this is a piece of cake.”
According to Burke, the students did a one-on-one presentation with the judges and then the judges left the room for about 20 minutes to tally up the scores.
“When they said ‘Second place,’ I’m [gonna] tell you, I never heard my name. All I heard was Measurement of Implicit and I start screaming,” said McCook. “That was it, I start screaming and Ida starts crying.”
This was the first time that a community college entered the WACJ competition.
“Having undergraduate students there is phenomenal and we love having that,” said Burke. “The competition is fierce though. She went up against master students and the person who won first place was a Ph.D. student. So having Clackamas Community College represent is amazing and the fact that it was good enough for second place is phenomenal.”
There were only awards for first, second and third place. Vincenzi and McCook received the second place prize, a check for $150.
According to Flippo, there is a new group of students formulating what they will study, and are going to enter another competition, but they won’t know until February.