After years of playing, recording and working as a professional musician, Brian Rose founded the Music Technology Program at Clackamas Community College.

The Clackamas Print: How long have you been playing music?
Brian Rose: Since I was four. That’d be 56 years, cause I’ll be 60 in January.

TCP: Tell us about your playing.
Rose: I started with classical, of course, because I had a classical teacher. I wanted to move on to other styles, jazz, and after five years of pretty intense classical training, I wanted to move into Scott Joplin and Ragtime. My teacher wouldn’t allow it, so I stopped taking lessons. I picked up the trombone, not because I wanted to play it, but because the school had run out of alto saxes, which I’d really wanted to play. I picked up the trombone and played that through high school and actually got a full ride to here (CCC) as a trombone player.

TCP: What was it like playing here as a student?
Rose: I went out here my senior year, and by the end of my first year, I was already playing gigs. I played trombone professionally for about 10 years or so, and then realized that the piano players are getting a lot more work than any brass player. I started buying keyboard equipment and teaching myself what I needed to play.

TCP: Why did a keyboardist need to understand MIDI, musical instrument digital interface, the protocol for digital instruments to communicate timing and notes with each other?
Rose: The bars were cutting back on the money they’d put up for bands, for two reasons. One was the drunk driving law kicked in and so people quit drinking during the week. The liability insurance triple, as that made the club liable for someone’s drunken condition. That was another big expense. People were drinking less, so they’re bringing in less revenue, and then their insurance went way up high. They started saying no more 5 or 6 piece bands: 2 or 3 piece bands. By the time I got my equipment together and got my chops together, I had to learn to program MIDI. I had to replace the bass player and all those layered keyboard parts you heard in all those 80s tunes, and I had to program drums.

TCP: Did you run a couple keyboards on top of each other then?
Rose: I’d have three or four keyboards going, with a drum machine. Eventually, I bought keyboards that had sequencers built in. Some guys used computers, you see Mac Classics out there. That’s how I got my training in MIDI. I took it a step further and said, “I’m getting pretty good at this.” I can actually make commercial music and sell it to local video producers, music libraries. I started making music as a writer. I expanded to build a studio where I can record bands. I did that for 20 years or so. Then I put together a studio at a private high school downtown, they asked me to come in and do that. Then the chair out here saw what I was doing out there, and he knew me, and he wanted to do that out here.

TCP: Was that Dave Mills?
Rose: No, Tom Wakeling. The music department was failing. He knew we had to go high tech. He brought me in, and we created the Music Tech department, and it basically bailed out the music department. That’s why I came out here. 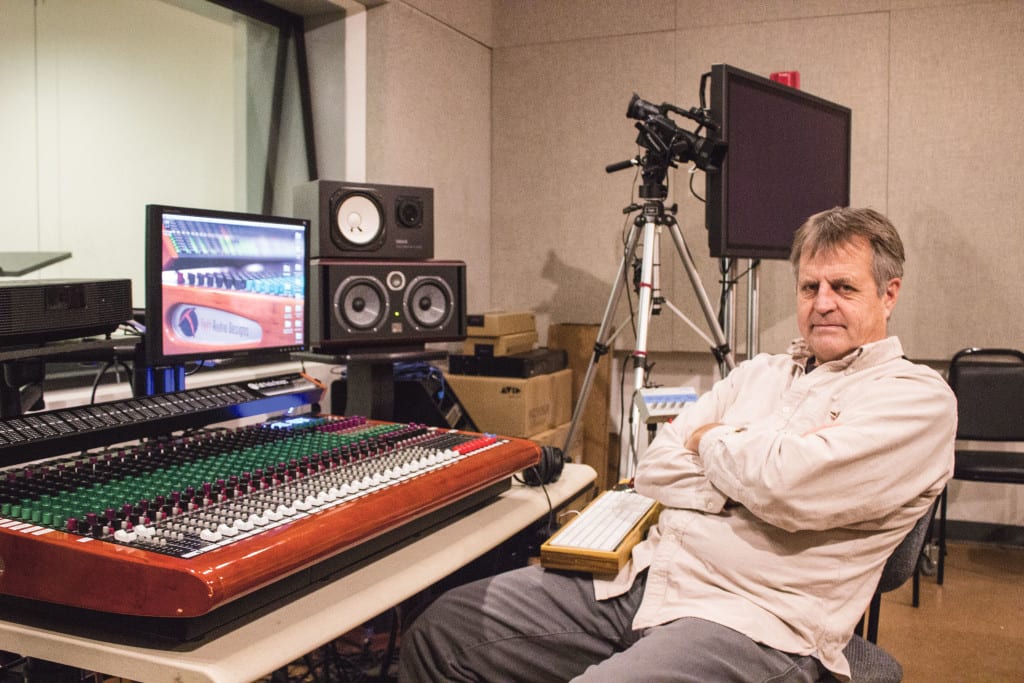