Advisers talk about the benefits of community college

When you think of going to college, you picture old brick buildings and grassy lawns sprinkled with laughing students on blankets planning secret parties that explode in campus dorm rooms.

Universities are also envisioned as scary and big while sucking up all your money and time.

People don’t think of quaint little community colleges first off. But two year colleges offer a stepping stone for those who dream of education and furthering their goals.

Clackamas Community College has many great benefits that cannot be found in a four-year college or university. CCC is less expensive, the class sizes are smaller and the approach is much more personalized.

Lydia Marvin, a student at CCC, transferred from Portland State University where she had to deal with science classes that were so large, they had to meet in an auditorium. There was never a chance for her to talk with the professor one-on one, and she was taught mostly by teachers assistants.

“This year [at CCC], my organic chemistry class is only like 20 students or so; I can go up to the person and actually ask questions in class,” said Marvin.

Clackamas is also a good place for a fresh start.

“It’s a place of second chances for a lot of students who might not be accepted into a four-year college,” said Gwenda Richards Oshiro, a CCC academic adviser.

“There are people who are right out of prison, folks who earned their GED and can’t afford to go to a four year college, folks who have just immigrated from another country. This is a place where people have a chance to access education,” said Oshiro.

“There’s a lot more focus on student success, and kind of tailoring services to the individual student,” said Green. “[CCC] is a great place to get started, get on your feet, start succeeding, do well, and then gain the confidence to go to a more challenging academic environment.”

Even college advisers agree that community colleges, especially CCC, are a good first choice. “We, as a school, really want to take the time to get to know our students and find out what it is that each student needs to be successful,” said Ariane Rakich, an admissions counselor at CCC.

Truesdell learned this lesson first hand as a young student at CCC.

Truesdell chose CCC because her employer right out of high school told her not to return to work until she was registered for college. He told her specifically to go to Clackamas. She liked the school because people treated her well when she walked in. It would have been easy to walk away if people hadn’t tried to help her.

Truesdell started her college career at CCC in 1980 and finished in 1982. “Finances were a factor in the decision to attend Clackamas Community College,” said Truesdell. She continued at Portland State University from 1983 through 1985. The fall term of 1985, Truesdell was at PSU as an instructor for English as a Second Language. 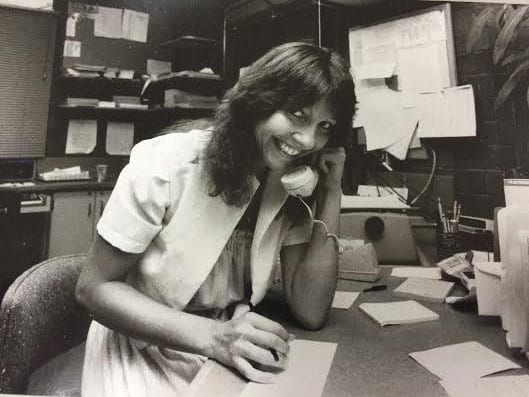 Truesdell pictured at Clackamas Community College in the 1980s.