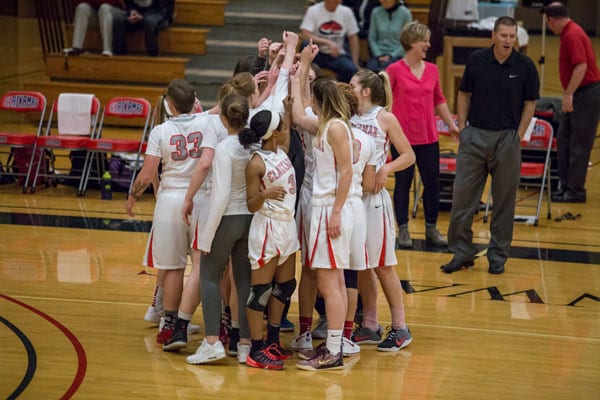 The women’s basketball team huddles together before a game.

With Clackamas Community College students having four weeks off after fall term due to the holiday break, many who were looking forward to the next term had to wait a bit longer.

On the evening of Tuesday, Jan. 10, snow began to fall around the Portland metropolitan area, and it piled up quickly. Oregon City received eight inches of snow. The temperature dropped over the next few days, staying below freezing, which led to canceled classes until Wednesday, Jan. 18.

The inclement weather affected staff, faculty and the student body, including athletes who are either working towards a strong finish to the season or working hard in the preseason to be ready for spring sports.

When the campus closes for weather, all of the buildings are shut down and unavailable for any use.

According to head wrestling coach, Josh Rhoden, it affected his athletes in the practice room, but also parts of the team were unable to travel to Pacific University in Forest Grove for the Boxer Open on Sunday, Jan. 15.

“We missed quite a few workouts,” Rhoden said. “Fortunately some of the guys live in apartment complexes that have fitness centers and were able to work out.

“Some of the other guys were able to hit up Nelson’s Nautilus over by Fred Meyer off of Beavercreek Road here in Oregon City and utilize their swimming and fitness center facilities.”

For last week’s meet at Pacific University, not all key members of the team were able to make it.

Rhoden noted that grayshirt 141-pound freshman, Jerry Mealey, was unable to compete because he lives in Corbett.

The Clackamas athletic director and head women’s basketball coach, Jim Martineau, said that his team was still able to get a practice in at a gym that the team uses for situations like this.

“Everybody is in the same boat, not just us, but all of the other community colleges,” Martineau said. “We were lucky that we didn’t get behind. A lot of the other schools that had home games had to postpone games, and they will now have to be made up at a later date.”

Both of Clackamas’s basketball teams were lucky that they had a bye in the middle of the week. Then they played a game in Eugene at Lane Community College on Jan. 14. All eight of the women’s team players who had planned to suit up were able to make the trip.

Martineau is concerned not only about student athletes, but all students, because of the possibility of falling behind and trying to play catch-up. Martineau brought up Tuesday night classes as an example, which are only offered once a week.

“If you have already missed one class, the expectation is that you have to still get that work done,” Martineau said. “It puts a lot of work on a student.”

The head track and field coach, Keoni McHone, said that with classes being canceled after only two days into the term, they had to start over after having another week off of training. They base their training plan on the number of weeks before the conference championships.

“We are now having to revamp our training for the next three to four weeks,” McHone said.

The track and field team will compete at an indoor meet on Feb. 12 at the University of Washington. The team usually sends around 30 members to the event.

With winter term now underway, everyone seems relieved that the snow and ice are gone. But more snow could fall before the term is over. What’s another snow day? Maybe a delayed midterm?