Do not steal this headline

In a perfect world, people can post whatever they want online, and not worry about it getting stolen or used elsewhere without permission. Unfortunately, as everyone knows, this isn’t a perfect world.
Social media has become a big way for almost everybody with modern technology to connect with family and friends, or share important, interesting or funny topics with their friends and followers. It has become so big that it is common to ask someone what their Snapchat or Instagram username is, rather than asking for a phone number.
However, flaws exist.
When someone posts something that is well-liked, people may share it to the point that the post becomes viral, which is when thousands or more can see it.
On Twitter, if a viral tweet is going around, numerous accounts out there intentionally seek these posts and repost them to their account using the almost too useful “copy and paste” tool. These people don’t credit the original creator and essentially claim it as their own. They sometimes even take the time to crop out an artist’s name from the corner of a picture, and never credit them in the picture.
The type of content stolen can vary. Most often it is words or funny phrases that are copied and pasted, then shared. In other situations, photos are stolen, modified, and sometimes have added content that can be misleading or even incorrect.
Most of the time the motive has to do with getting hits, more followers and/or even for profit.
“Some social media accounts use other people’s content for money,” said Janne Ahlberg, a security professional from Finland, who runs the Twitter account @hoaxeye and a blog that is used for identifying fake or hoax pictures. “These could be described as ‘picture spam accounts’. The business is often very simple: more followers, more money via online ads,” said Ahlberg in an email.
In many cases, the accounts that steal content have hundreds of thousands of followers, which is usually more than the person who created the content. Followers of these accounts, who just follow to see funny content, share and retweet, not knowing that the content is stolen.
According to CCC librarian Jane Littlefield, who has knowledge of copyright laws, people with Twitter accounts technically should not do this.
“As soon as you create something, it’s copyrighted, it’s a constitutional right,” Littlefield said. “When you post online, you’re publishing it and you still have that copyright protection, but nobody thinks about that when they go online and grab something and use it.”
But many people still get away with it every day.
“Putting a picture in a PowerPoint slide, you’re allowed to do that because it’s an educational setting,” she said. “In the real world, a Twitter for profit setting couldn’t do that under copyright law. But this is broken every day millions of times, so no one is going to go after anybody for it.”
We are far from ending the problem, but there are ways that artists can stop people who have stolen and used their content.
“They can issue a cease and desist letter, and if the person doesn’t take it down then they can go after them lawfully,” Littlefield said. “However, that doesn’t mean the image is going to go off the internet if it is retweeted millions of times.”
Ahlberg addressed how content stealing will likely never stop online.
“I don’t think people will stop stealing photos or other content especially when money is involved,” Ahlberg said.
“In the case of photos, reverse image search is a good tool to look out for stolen content,” Ahlberg said. “Other people can try to raise awareness in various ways. One efficient way is to stop following the professional content thieves.”

The next time you’re on Twitter or anywhere on social media, watch out for what you repost or retweet. Reposting art you see isn’t wrong, but you could be sharing a picture that was stolen originally, and in the end, the original creator may not get anything for all the hard work he did to create it. 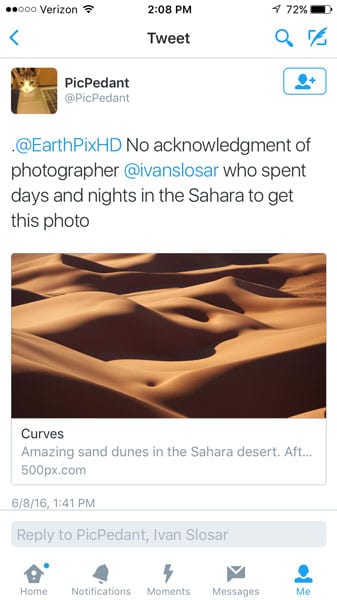 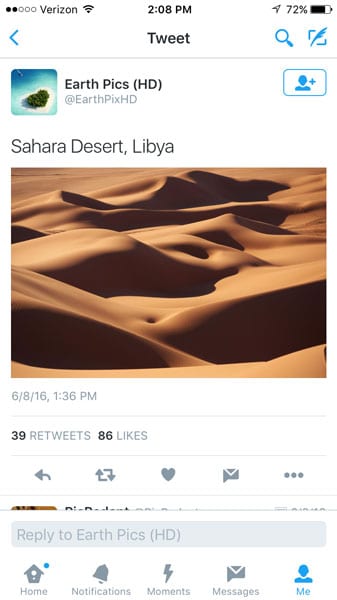