On Nov. 12, Disney opened its vault to the public with Disney+. For those unaware, Disney+ is the latest in a line of new streaming services and arguably the most anticipated one at that.

With such a massive array of intellectual properties under lock and key, it’s reasonable to expect that Disney might price-gouge their customers to make them pay for access to such a collection, but that’s where Disney subverts expectations — they undercut the market.

At the low price of $6.99 per month or $69.99 per year, you can access their 4k, ad-free content and the ability for four screens to watch at the same time. If you’re willing to spend a little more, you can upgrade to a package that bundles ESPN+ and Hulu with Disney+ for $12.99 per month. Compare these prices to their largest competitors and you can see why Disney+ is a force to be reckoned with. With Netflix’s basic plan, you pay $8.99 for one screen at a time — not even in HD. To see the same quality that Disney+ offers, you’d need to opt Netflix’s $15.99 monthly plan.

How is Disney+ able to get away with such a low price? With a genius marketing scheme. Not only does Disney+ plan on releasing new content on a weekly basis (to avoid subscription cancellation) but they also own the licenses to all the content on Disney+, so they don’t have to pay out to other studios (unlike Netflix.) On that same note, the more adult-oriented content Disney owns will fit nicely on their other streaming platform, Hulu.

On launch, the platform feels okay. I want to get it out of the way that I’m a huge Disney fan, but something on Disney+ feels missing. When I first booted it up, I immediately started watching “Aladdin” (94’, not 2019) and I became overcome with nostalgia. As I perused more of the streaming service, this childlike trance  of nostalgia quickly dissipated, and I think it’s from a lack of new content. Many people have grown up seeing (and loving) Disney movies, but it’s almost as if there’s an oversaturation of Disney in our culture. It’s hard to sit down and watch Disney movies all the time.

On the other hand, Disney+’s exclusive content is really well made, but it’s hard to express my feelings about it. Mostly due to being only two episodes in and only having a few series to choose from.

As it is right now, Disney+ is held back from reaching its full potential only by this lack of new content. With the amount of original content Disney has announced for the platform and plans on eventually releasing, this can easily be turned around.

If you really love Star Wars, Pixar, Marvel or Disney classics, I’d say pick it up. With such a low cost compared to other streaming services, there’s not much to lose except $7. If you’re interested in the new inventive content that Disney+ plans on offering, I’d wait a couple months. Most likely, you probably already own all the movies on Disney+ anyways so I’d wait for the exclusives to finish airing or until there’s a better selection.

If you’re new to streaming services in general, you’d better get used to them. Consumers have fallen in love with the idea of picking and choosing the content they watch and with the advent of Disney+, there’s only going to be more and more. Maybe one day we’ll have a universal box where we can flip between all types of content without having to buy individual services. 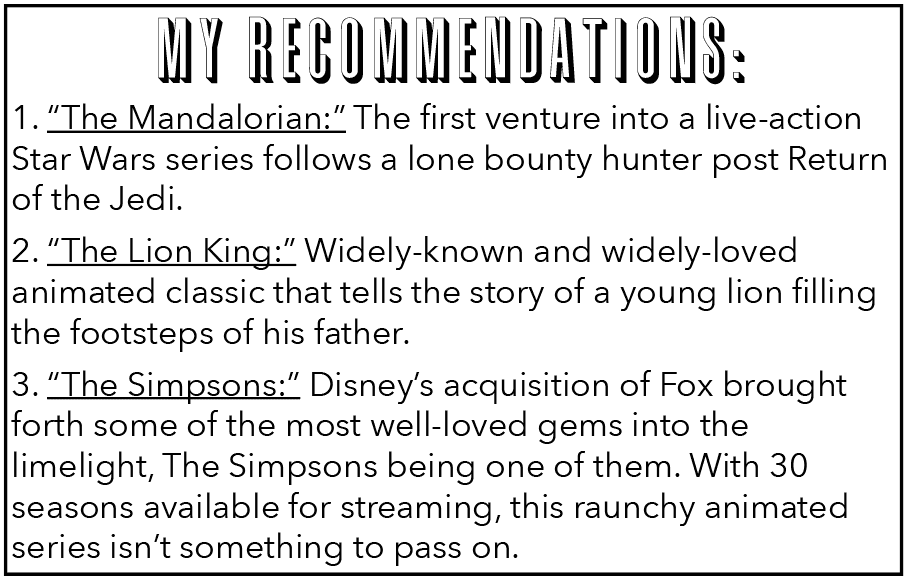