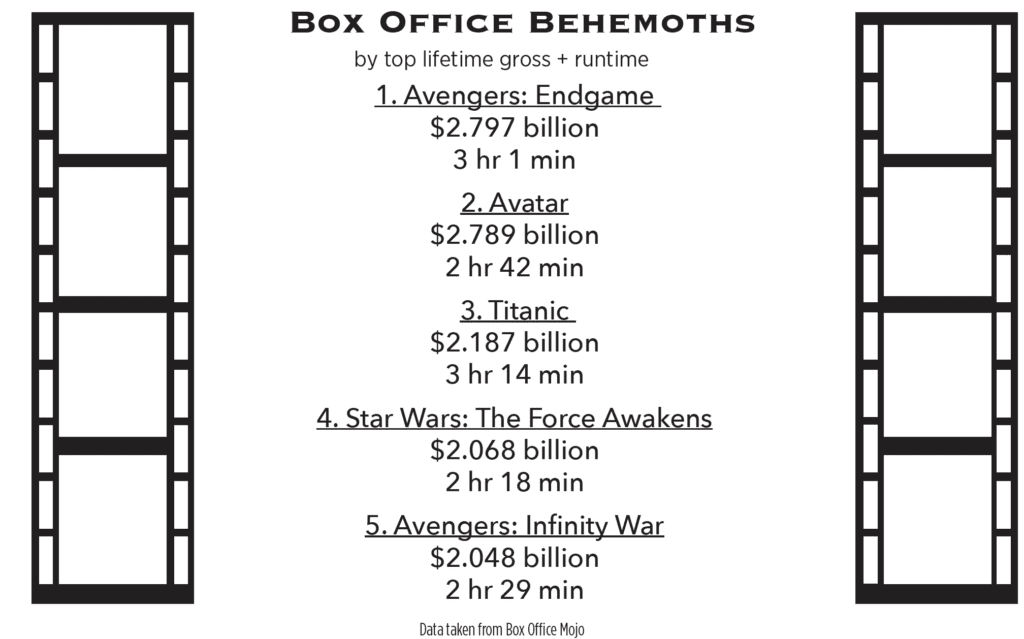 Have movies gotten too long?

If you have seen any movie in the past 12 months, you might have noticed the trend of creating longer movies, specifically ones that have a watch time of nearly three hours.

“Avengers: Endgame,” “It: Chapter Two” and “Once Upon A Time in Hollywood” all run more than two hours and thirty minutes, with some reaching past the three-hour mark.

It could very well be that 2019 is an exception due to the overwhelming success of “Avengers: Endgame,” making studios less hesitant to approve a longer runtime in an effort to emulate that success.

While longer movies may be a turn-off for people with children or small bladders, they are some of the most successful movies. Are we going to be seeing more movies of this length?

The previous holder of that record is another lengthy movie, “Avatar,” and the one before that as well, “Titanic.” “Avatar” won three Oscars, and “Titanic” won four.

Inversely, these movies have Metacritic scores that work in the exact opposite direction, with “The Hateful Eight” earning a Metacritic score of 68, “It: Chapter Two” a 58, and “Batman v. Superman: Dawn of Justice” at 44.

Traditionally, when a movie is adapted from source material of some sort, such as a book, TV show, or video game, people (and studios) understand that one movie may simply not be enough, or that the movie will need to be a little longer. Additionally, some studios will produce more movies to simply make more money.

“The Lord of The Rings” series is famously known for every installment running more than three hours long, (longer still with the extended cut,) and most people are okay with it due to the fact that the source material is 481,103 words long (data taken from LOTR Project.)

On the flip side of that coin, many people argue that the prequel, “The Hobbit,” shouldn’t have been expanded into three movies

(especially with the longest being three hours and seven minutes long and the shortest being two hours and 44 minutes,) due to the fact it’s only 95,356 words. At this point, it can seem like directors are dragging out the movies to make more money.

With the recent onset of Disney remakes, even Disney has been moving to make their movies longer. With “Aladdin,” they increased the runtime by 41% compared to the original 1992 release, and with “The Lion King,” there was an increase of runtime by 33% compared to the 1994 original.

Overall, I don’t believe that movies are becoming too long. In an era where people complain about the lack of original stories in cinema, pushing the length of a film isn’t a bad idea. There is no formula to make a good movie, but if people want to stop seeing copy-and-pasted storylines and sequels, they should expect to see changes in the movies we watch.

With the way longer movies have become successful recently, it certainly doesn’t seem like anybody is complaining. This gives directors the opportunity to use more footage without having to worry about condensing it within Hollywood restraints.

If directors were never willing to push the envelope, there wouldn’t be some of the most famous movies we love today. As a consumer, you’ll just have to learn to slow down on drinks before the movie.